In a First, Israeli General Opens Up About Use of Armed Drones 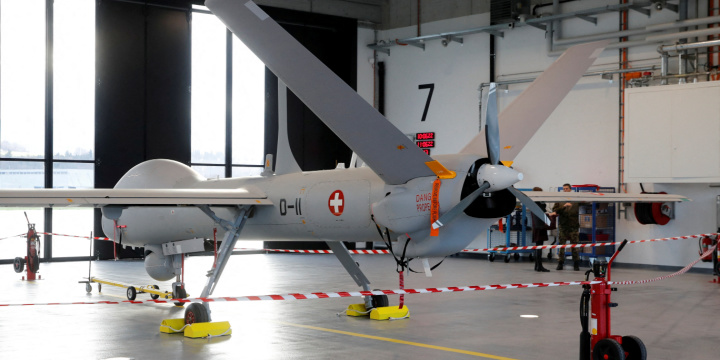 The HERMES 900 HFE drone made by Israeli company Elbit for use in the Swiss reconnaissance system (ADS15) is seen during a media presentation at the Swiss air force base in Emmen, Switzerland, December 9, 2019. REUTERS/Arnd Wiegmann

Israel on Wednesday described what has been an open secret for two decades – that it has used drones not just for surveillance but also in strikes within the country, against Palestinian terrorists in Gaza, and possibly targets as far away as Iran or Sudan.

Israeli censors in July permitted publication of information about the armed drones and the chief of Israel‘s artillery corps – which runs the drones together with the air force – used his speech at an industry forum to give what he described as a first public account of the armed versions of the pilot-less planes.

Whereas previously he could only offer hints, “today I can speak of this openly”, Brigadier-General Neri Horowitz told the annual UVID DroneTech conference hosted by Israel Defense magazine in Tel Aviv.

He said the armed drones not only provide Israel with additional firepower, but also allow, in a single platform, for both the speedy detection and attack against targets, such as Gaza rocket crews before they can carry out a launch.

He disclosed that when jihadi insurgents from Egypt burst across the border into southern Israel in a hijacked armoured vehicle in May 2012, they were destroyed in a drone strike.

Showing footage of Ukrainian forces using drones to guide shelling of invading Russian troops, he said: “We have the same application here.”

Israel is expanding its drone forces, whose personnel are 30% female, Horowitz said, adding that the artillery corps was replacing its cannon insignia with concentric circles representing the incorporation of the aerial platforms.

However manufacturers of armed drones remain barred from advertising them and none of them were among the models on display at the conference.

“There are information security concerns,” explained a sales representative for one of the companies, Elbit.

In a separate speech, Economy Minister Orna Barbivai said drone exports were popular abroad, including among Arab countries that have drawn closer to Israel since 2020. She did not specify if such exports included armed drones.