Idris Muktar Ibrahim, a California-educated native of Kenya, has done work for CNN since 2015, reporting on critical events in Africa, including then-President Barack Obama’s visit to the region and the crash of Ethiopian Airlines Flight 302.

Earlier this year, following his graduation from UC Berkeley’s Graduate School of Journalism, CNN’s international desk took him on as a producer.

Yet Ibrahim’s profound hatred of the Jewish state calls into question his ability to impartially report on the Arab-Israeli conflict.

For instance, in a July 13, 2014, Twitter post (screenshot), he seemingly expressed support for Nazi mass murderer Adolf Hitler. “I have shifted to team Germany after finding out that Messi supports Israel,” Ibrahim wrote, concluding the tweet with the offensive hashtag “#teamHitler.”

Ibrahim also lavished praise on Hamas (screenshot), claiming that members of the US-designated terror organization are “modern day freedpm fighters [sic]” who are “definding [sic] their land.” According to the CNN producer, Hamas is entitled to its “armed struggle” against Israeli civilian targets. 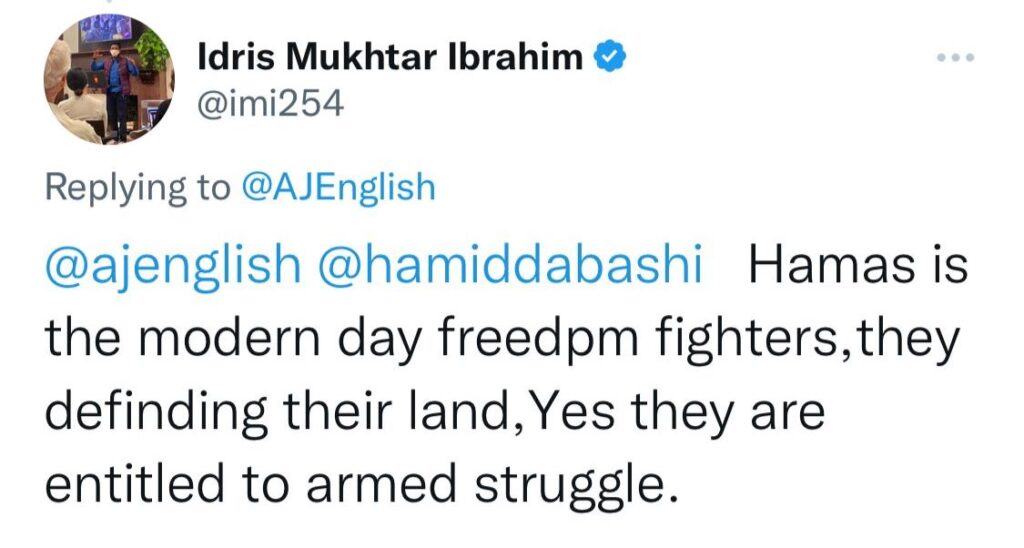 Notably, just hours after Ibrahim posted his tweet on July 18, 2014, a Hamas rocket struck a kindergarten in the southern Israeli town of Gan Yavneh.

Idris Muktar Ibrahim is, of course, entitled to his personal views, even if they are ignorant and offensive. But as we previously explained, producers with a political agenda can be selective with the information they present to the public, resulting in lopsided media coverage of the conflict in the Middle East.

Sadly, Ibrahim is but the latest in a series of journalists whose virulently anti-Jewish views have been exposed by HonestReporting. Over the last three months alone, our editorial team uncovered four antisemitic, anti-Israel journalists and successfully convinced reputable outlets to cut ties with them (see here and here).

HonestReporting has contacted CNN for comment. In response, a spokesperson for the network told us they are looking into the matter.