Palestinian children and youth are in grave danger. The Palestinian Authority (PA) has announced that it wants them dead — literally offered as a “sacrifice for Jerusalem and the cause.”

Many of the terrorists who have been killed in recent terror attacks have come from the cities of Jenin and Nablus. To reinforce this terrorism and encourage more young people to seek Martyrdom, the PA produced and broadcast a filler on its official TV station showing funerals of dead terrorists in Jenin.

The TV footage praises Jenin for “sacrificing” its children as “heroes.”

The program proudly boasts that “Jenin is exporting freedom to the world, and presenting its children as a sacrifice for Jerusalem and the [Palestinian] cause.”[emphasis added]

The PA further turns the terror and Martyrdom into religious worship, saying that it is “Allah’s choice”: He has chosen Jenin as “a gushing spring of Martyrs and Martyrdom” [emphasis added]: 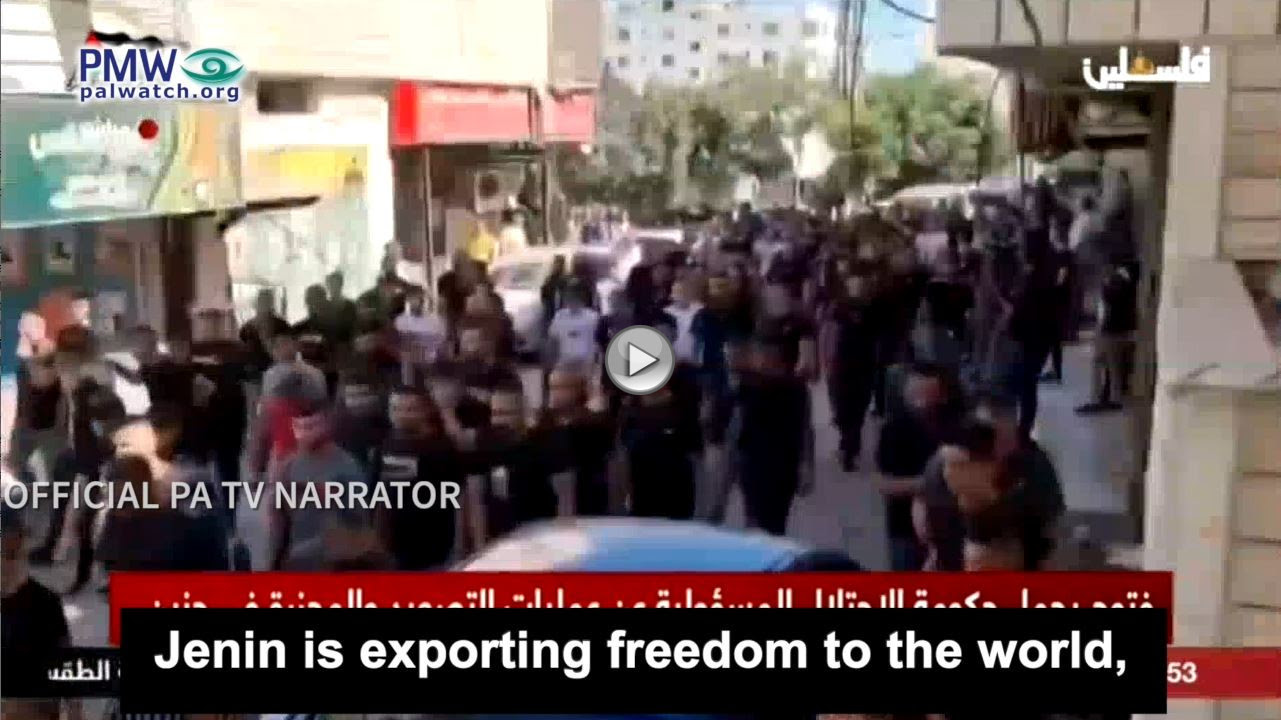 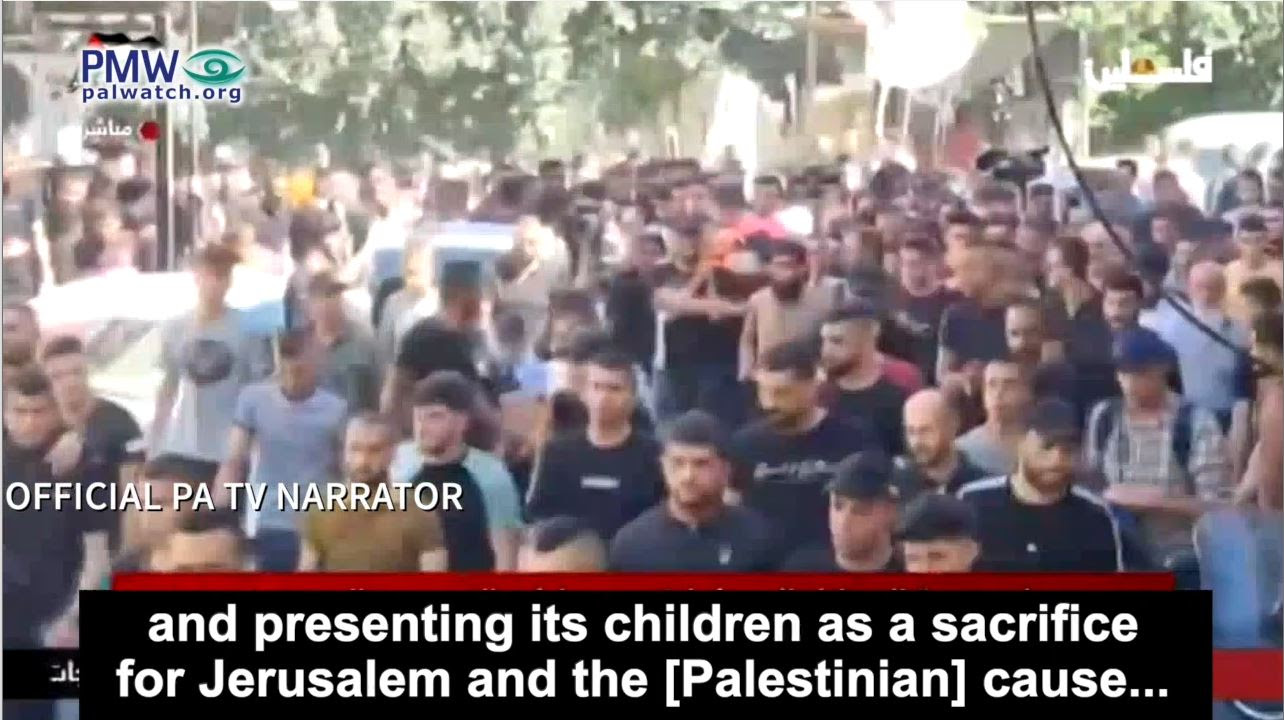 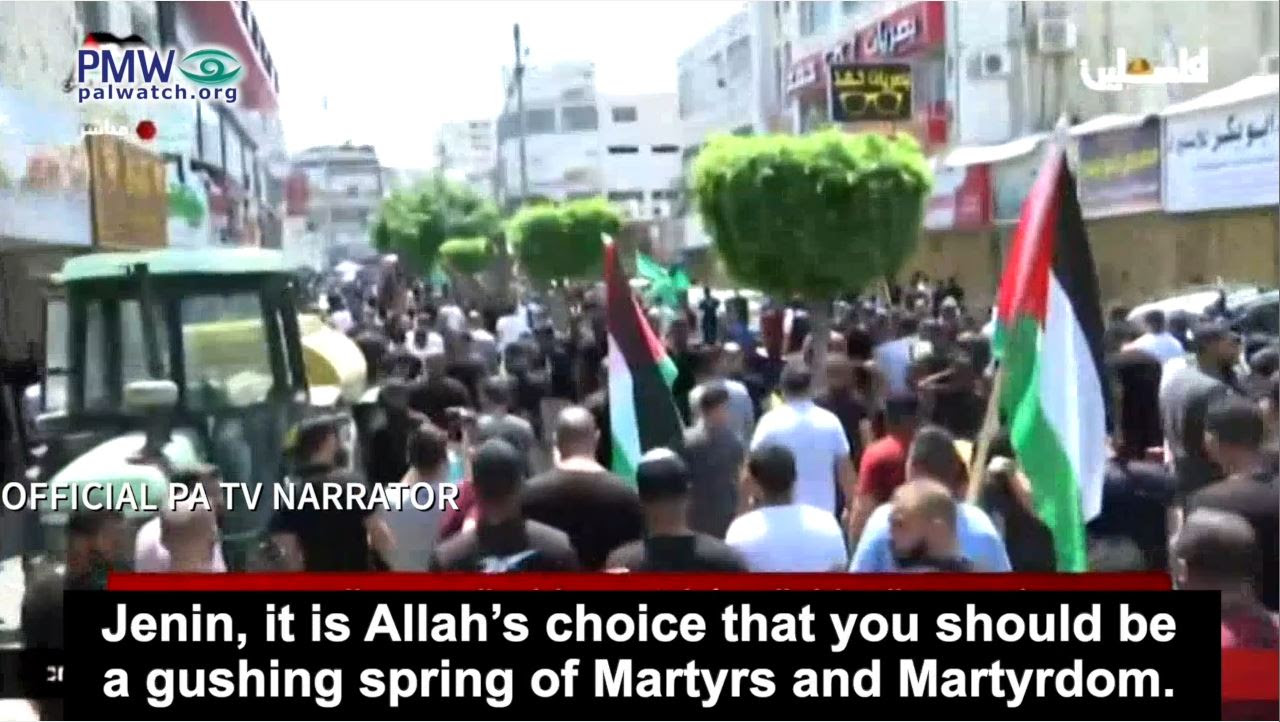 Narrator: “Hello Jenin, hello to your heroes … Jenin is exporting freedom to the world, and presenting its children as a sacrifice for Jerusalem and the [Palestinian] cause. Jenin, O our beautiful bride, which is perfumed every day in the musk [scent] of Martyrdom. Jenin, the thorn in the occupation’s throat … Jenin, it is Allah’s choice that you should be a gushing spring of Martyrs and Martyrdom.”

This PA child “sacrifice” promotion is part of an ongoing PA strategy. On World Children’s Day earlier this week, Palestinian Media Watch exposed the real reason why so many Palestinian children die in terror attacks — because the PA has brainwashed generations of kids to seek Martyrdom-death for Allah and “Palestine” in terror attacks and violent confrontations with Israel, promising them honor, glory, fame, a place by the prophets in Allah’s Paradise, and last but not least — a wedding to the 72 virgins.

Instead of blaming Israel for dead Palestinian children, the UN should be branding the PA as guilty of child abuse, sacrificing their own children for political gain.