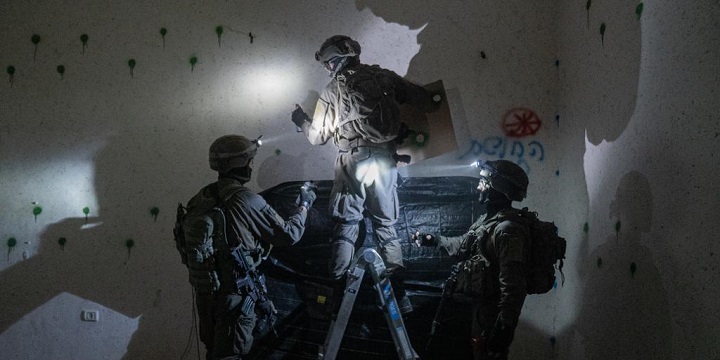 Israeli forces operating in the town of Kafr Dan in the West bank on January 1, 2022. Photo: IDF

Israeli forces on Sunday demolished the residences of two Palestinian men accused of killing an Israeli officer in September, in an effort that culminated with deadly riots in which two Palestinian militants were killed and weapons seizures.

The overnight operation was carried out by Israeli military and Border Police forces in the town of Kafr Dan, northwest of the West Bank city of Jenin, after petitions seeking to halt the demolitions were struck down by the Supreme Court.

The Palestinian men whose residences were targeted had arrived at Gilboa Crossing, north of Jenin in the West Bank, on September 14, 2022 “with the intention of carrying out a deadly attack,” according to the military. In a subsequent exchange of fire, Maj. Bar Falah, 30, deputy commander of the Nahal brigade reconnaissance unit, was fatally shot. Both of the Palestinians were also killed.

A violent riot broke out during Sunday’s overnight demolition effort, with Israeli forces facing “massive” gunfire, as well as explosive devices, Molotov cocktails, burning tires, and hurled rocks, according to the military. Troops responded with riot dispersal means and live fire, with an unspecified number of hits identified.

According to Palestinian sources, two Palestinian men were killed during the confrontation. One was claimed by the Al-Aqsa Martyrs’ Brigades, while the other was claimed by Hamas, Reuters reported. Both groups are blacklisted as terrorist organizations by the United States, European Union, and Israel.

Israeli forces also identified and confiscated weapons, Molotov cocktails, and military vests in a building near the targeted residences, the military said.

The incident comes as Israel wrapped up a particularly bloody year amid a recent surge in terrorism, with 31 people killed in attacks by Palestinian and Arab-Israeli perpetrators in 2022, and more than 100 others injured. During the same time period, 146 Palestinians were killed by Israeli forces in the West Bank and eastern Jerusalem, most during military raids and clashes in Jenin and Nablus, according to the United Nations Office for the Coordination of Humanitarian Affairs.