We’re Proud of Our Terror: Fatah Takes Stock at End of 2022

As is custom at year’s end, Mahmoud Abbas’ Fatah movement recently took stock of its accomplishments. What achievements did Fatah find noteworthy?

That Fatah played the leading role in terror against Israel, obviously.

As Palestinian Media Watch has documented, Fatah is eager to show Palestinians that it is committing much more terrorism than other Palestinian parties and organizations — and definitely more than its rival, terror organization Hamas.

Fatah boasted of carrying out 7,200 terror attacks against Israel in 2022, while criticizing Hamas for not attacking.

In its summation of 2022, Fatah is continuing to brag about its terror. The Fatah Commission of Information and Culture posted a video from Fatah’s own TV station with facts on Fatah’s leading role in terror against Israel.

As a vow for the future and the approaching year of 2023, Fatah emphasized that terrorists continue to be the top priority of Fatah and Palestinian Authority (PA) leader Mahmoud Abbas, repeating his vow that “even if we are left with one penny,” the PA/Fatah will spend it on terrorists and their families:

Fatah-run Awdah TV host: “The anniversary of the Fatah’ Movement’s establishment is the anniversary of the start of the modern Palestinian revolution. This means that Fatah represents the Palestinian revolution, or that it is its backbone … The secret of this movement and the source of its strength historically lies in its patriotism that was expressed in 225 Martyrs since the start of this year [2022], with 123 of them being affiliated with Fatah.

The number of prisoners in the prisons is 4,700 prisoners, with 2,800 of them, constituting 60%, being affiliated with Fatah. Among them, 552 prisoners were sentenced to life, with 350 of them, constituting 65%, being affiliated with Fatah. As His Honor [PA] President Mahmoud Abbas said, we will not prevent or cut off the money designated for the Martyrs’ families, the prisoners, and the released prisoners, as there are some who are attempting to do — even if we are only left with one penny, we will spend it on the Martyrs’ families and the prisoners.”

Posted text on Fatah Facebook page: “To those who ask: Where is Fatah today? Watch the video, and you’ll know the answer from the language of numbers, proof, and evidence.

The Fatah Commission of Information and Culture also posted an image and text highlighting Fatah’s role in terror, stressing the same facts: 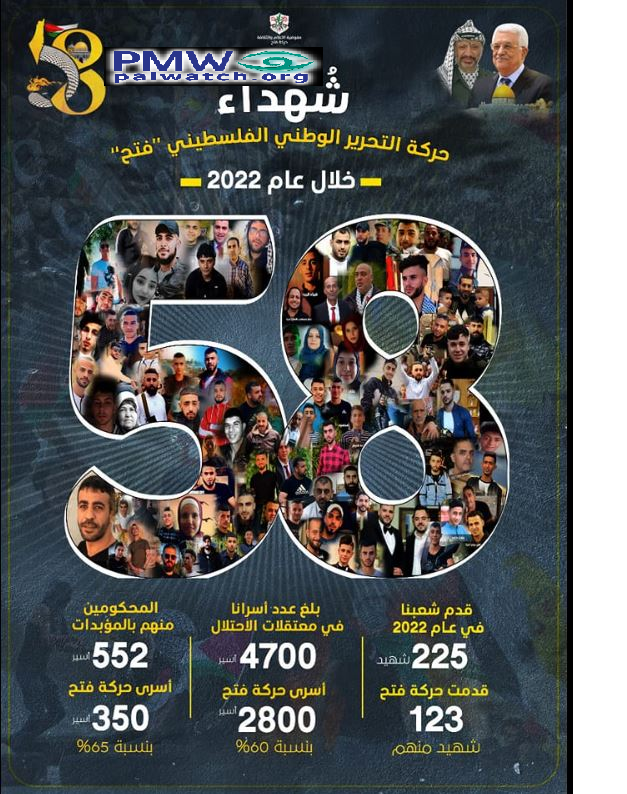 Posted text: “This is Fatah

In 2022 our people sacrificed

Fatah sacrificed 123 of them

The number of our heroic prisoners in the occupation’s prisons reached 4,700

The Fatah prisoners are 2,800 prisoners, constituting 60% [of the total]

Those of them who were sentenced to life are 552

Of them, those affiliated with Fatah are 350, constituting 65%

The image shows a poster for the 58th anniversary of “the Launch” of Fatah. In the upper left corner is a logo featuring the PA map of “Palestine” that presents all of Israel together with the PA areas as “Palestine.” In the upper right corner are former PLO and PA Chairman Yasser Arafat and PA Chairman Mahmoud Abbas. In the middle is the number “58” with pictures of Palestinian terrorist prisoners inside it. Featured prominently at the bottom left of the “5” is terrorist Nasser Abu Hmeid, who was responsible for the murder of seven, and who recently died of cancer in prison.

The poster features the same facts about Fatah terrorists among the dead terrorist “Martyrs,” terrorist prisoners, and terrorist prisoners serving life sentences as was presented in the post. Text accompanying the image said, “Just like we thwarted the deal of the century [i.e., former US President Donald Trump’s Middle East peace plan] and the annexation plan, we will thwart the new fascists.”