We at CAMERA UK were recently alerted to a Sky News broadcast for children, which aired on May 13, 2022 (“FYI: Special Report From Both Sides of The Wall”). The program was introduced as “A special report on two young people from both sides of the Israeli-Palestinian conflict as they meet to discuss peace.”

However, before the program pivoted to the young people on “both sides,” the presenter presented a decidedly one-sided and ahistorical backgrounder on the origin of the conflict.

2:27 The presenter says that “an internet search tells me that this part of the world wasn’t always called Israel.” [emphasis added]

In fact, a Jewish kingdom called Israel dates back to 1020 BCE (while the people known as the Israelites date back three centuries earlier).  Though foreign conquests would eventually disperse the region’s indigenous Jewish inhabitants, asserting that “this part of the world wasn’t always called Israel” is a non-sequitur which obfuscates the Jewish history of, and ties to, the territory in what today is again Israel.

2:31 The presenter says Israel was “until 1948, known as Palestine,” and that, “for centuries, Jews, Muslims and Christians fought for control of the region”.

It’s not clear what point the presenter is trying to make. If she’s suggesting there was a independent Palestinian state or territory (in the modern sense of the word “Palestinian”) at any point in history, that’s a lie.

Most of the Middle East, including what is today Israel, prior to the establishment of the British Mandate, was under Ottoman Turkish rule for 400 years. Prior to that, the territory in question was controlled by Mamluk, Crusader, Arab, Byzantine, Roman, Persian, and Greek rulers. Jews weren’t fighting “for control of the region” until they were forced to defend the re-birth of their state in 1948, the borders of which were determined by the UN partition plan of 1947 — borders accepted by the Jews, but rejected by the Arabs.

In the second century ACE, after putting down the final Jewish revolt, the Romans began using the name Palaestina for Judea (the southern portion of what is now commonly called, outside of Israel, the West Bank) in an attempt to minimize Jewish identification with the land of Israel. The modern understanding of the term “Palestinians” as a distinct people, is only a 20th century phenomenon.

2:46 The presenter asserts that “After the end of World War II, during which six million Jews were killed, Britain and its allies decided to give Jewish people a country to call their own, within Palestine. And, they named it Israel.” [emphasis added]

In reality, Israel wasn’t some consolation prize “awarded” to the Jews as moral compensation for the Holocaust.

Though established a few years after the murder of two out of every three Jews in Europe by the Nazis and their allies, the state of Israel’s foundations lay in the fact that the land was the birthplace of Judaism, the Jewish people, and the sovereign ancient Jewish state; that there was a continuous presence of Jews in the land through various foreign empires over 3,700 years; that, in the Diaspora over thousands of years, Jews continued to pray and direct their spiritual aspirations to Jerusalem; that Jerusalem had a majority Jewish population since as early as the 1840s; that Israel’s creation was part of the League of Nations Palestine Mandate and the UN Partition Plan; and, finally, as a result of the tiny country’s defense against an Arab invasion on the day of its birth.

3:20 The presenter says that “Palestinians and Arabs who lived there thought that this [Israel’s establishment] was unfair, and this led to one of the longest conflicts in history. In that time, many Palestinians have lost their land and their homes.”

The presenter omits that Palestinian Arabs were offered their own state in 1948, which they rejected, not because they objected to the particular boundaries, but because they objected to the existence of a Jewish majority state within any borders. If Arab states hadn’t started a war of annihilation against the nascent Jewish state, no Palestinians would have lost their land or homes. Finally, also omitted from the narrative are the 800,000 or so Jews who lost their homes, property, and assets after they were expelled or forced to flee Middle Eastern countries during that time period.

6:21 The presenter says that Israel’s security barrier has been called “illegal” by an “international court” — but fails to note that it was an advisory opinion only, and obfuscates the five year Palestinian terror campaign which necessitated its construction.

7:47: The presenters refers to a Palestinian ‘refugee camp’ near Bethlehem (Dheishe), and asserts that “many Palestinians who live there were forced out of their homes by Israelis who took control of their land.”

First, the overwhelming majority (over 99%) of Palestinians declared as “refugees” by UNRWA are merely descendants of refugees from 1948, so aren’t refugees in any sense of the word, and didn’t lose any land. Further, viewers are not told that, between 1948 and 1967, the West Bank (including the area near Bethlehem referred to by the presenter) was illegally occupied by Jordan.

8:04: The presenter makes the completely unsubstantiated and highly specious claim that “hundreds of Palestinian children” have been killed while merely throwing rocks at soldiers. In fact, current regulations allow for soldiers or police to open-fire at stone-throwers “only in circumstances where a concrete and immediate danger exists and the stone-thrower will cause injury to the life or bodily welfare of a person.”

8:15: The Palestinian teen from Deheishe interviewed for the program, named Ibraheem, tells the presenter that his cousin was killed by Israeli soldiers for throwing stones when he was 14 years old.  Here’s a still frame which shows a wall with a tribute to his cousin:

However, a CAMERA Arabic researcher was able to identify his cousin (per the writing on the wall) as Jihad al-Jaafari, who, according to Palestinian and Israeli sources, was 19 or 20 years old when killed — so, an adult, not a teen. At the time of his death, the IDF said he and other Palestinians had been hurling explosive devices at soldiers, in addition to stones.

Here he is in a photo taken a some point prior to his death, seen with a weapon, via a pro-Palestinian Facebook page: 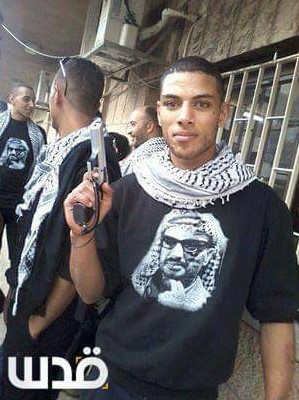 The rest of the broadcast focuses on a conversation between an Israeli and Palestinian teen about how to achieve peace, and is not all problematic. However, the historical background prior to that part of the show led viewers to accept the idea that’s continually promoted by anti-Israel propagandists — that Israel is a foreign implant with no real legitimacy in the region.

Since any hope for a real peace agreement must include the Palestinian acknowledgement of the fundamental legitimacy of the Jewish state, Sky’s effort at “bridge-building” failed spectacularly.