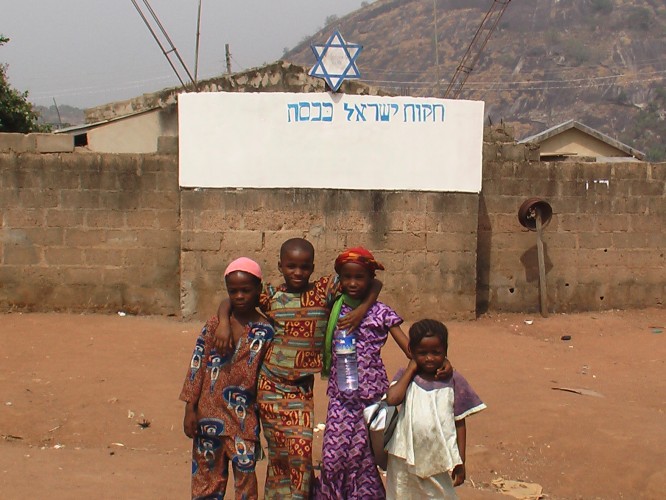 Travel to Africa and meet members of the Igbo tribe who identify with Israelite origin, and are embracing Jewish tradition with fervor today. Produced and directed by Jeff Lieberman, Re-Emerging: Jews of Nigeria, follows individual stories and collective histories to paint a picture of the Igbo past and present as told from their perspective.

The film presents Igbo engaged in Jewish practices, i.e. prayers with African tunes, and men performing the mikvah ritual in a river. Historical references include the Igbo journey from Biblical times up to the 1960’s Biafran War, which killed over 1 million Igbo. The journey to connect to Judaism is related in the struggles the Igbo face. Surrounded by colonial influence, the Igbo deal with prejudices from their Christian and Muslim neighbors, and have difficulty connecting to Jews in the West.

Lieberman first heard of the Igbo in 2005 at a synagogue in Los Angeles. The next year he took a plane to Nigeria with a Rabbi helping the community, to meet the Igbo for himself. Within the first 10 seconds, the Igbo community gave him complete trust, and he lived amongst the people, filming for five weeks.

During his stay, Lieberman met Shmuel and other Igbo who grew up with the tradition that his people came from Israel, and after attaining internet access in recent years, found information about Judaism and began to connect similarities between Igbo and Jewish traditions.

After returning to the US, Leiberman continued his research, exploring the history of the Atlantic Slave Trade where thousands of Igbo slaves were captured and brought to American shores. The story takes us to Ibo Landing in Georgia, where Lieberman explores how many African-Americans currently are descendants of Igbo brought to the United States at that time. Lieberman’s research created a re-contextualization towards African-American roots and how it has evolved to the culture today.

His film stands apart from other Western documentaries on lost Jewish peoples because he lets his subjects speak for themselves. The camera is used to tell the Igbo story from their perspective, rather than imposing foreign views and opinions.

“I really wanted the people to tell the story from their perspective, and not have a ton of ‘white people’ commenting whether that is possible or not. ”

Re-Emerging is very much an independent film, created out of a desire to tell these peoples’ story. Without a budget, or outside help, Lieberman was able to produce the film, using his available resources, committed time, and energy.

The one thing Lieberman did spend money on was an original score commissioned for the film. Lieberman talked to hundreds of composers, and decided on working with Jeremiah Lockwood (of the Sway Machinery) who knew Jewish music more than any of the other candidates, but was also able to do new versions of Jewish music with an African and Nuevo influence, key to the culture and feeling of the film.

Taking place in Africa, Lieberman dealt with technical issues in production. He battled extreme lighting situations, due to a strong sun, and a very dark, electricity free night. (Charging batteries must not have been easy!) Lieberman filmed when he could, catching moments on the fly. He tried to capture as much of the feeling of Nigeria to show that this is the real Africa. “I tried to capture a lot of people’s faces, [that is] something that intrigues me.”

Leiberman has a background in TV specials, news stories, and documentary work for many large television and online networks as well as behind the scenes production on a few major films. Currently, Lieberman is a writer-producer with CBS National News and a video reporter for NYPost.com.

The Igbo asked Lieberman to promise them that he would help get their story told, to be acknowledged that they exist.

Watch the trailer below and join Jeff Lieberman for the premiere of Re-Emerging: The Jews of Nigeria May 17th, 2012 at the 92Y in New York. Advance tickets are available here.