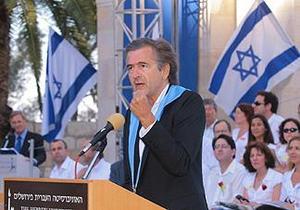 Bernard-Henri Lévy has never hidden his support for the Jewish state. It is a constant in his public utterances, whether made in France, the US or Israel. As a French intellectual, this puts him in the minority. Lévy has used his celebrity to draw awareness to the dangers of anti-Semitism and anti-Zionism in dozens of articles in the English and French press. Even more importantly, BHL, as he is known, has not shied away from reproaching those on the left who reflexively criticize Israel.