As we’ve documented continually , Glenn Greenwald has a history, both at his former blog at Salon.com and ‘Comment is Free’, of advancing antisemitic tropes (including use of the neo-Nazi-derived anti-Semitic slur “Israel-Firster”). He also subscribes to a leftist ideological package which naturally imputes almost comic book-style villainy to the United States.

Recently, when asked to sum up the political significance of his campaign on behalf of Edward Snowden’s theft of thousands of classified NSA documents, he answered thusly:

the US and its closest allies are trying to build a surveillance system that has as its primary objective the elimination of privacy globally, by which I mean that everyone’s communications electronically will be collected, stored, analyzed and monitored by the US government.

Of course, the primary objective of the NSA is not some sinister plot to eliminate privacy globally but, rather, to defeat terrorists and their organizations by collecting and analyzing information and data for foreign intelligence and counterintelligence purposes.

More recently, Greenwald, along with Laura Poitras and Ewen MacAskill, published a new expose based on files obtained by Snowden, titled ‘NSA shares raw intelligence including America’s data with Israel‘, Sept. 11. Whilst you can read a good fisking of Greenwald’s new ‘revelations’ here, an even more interesting question worth exploring is how someone like Greenwald, with such a palpable loathing towards the U.S., is considered to have any credibility at all on issues of American national security.

For some background on his ideological orientation, here are a few highlights from Greenwald, the ‘civil libertarian’ who authored a book titled ‘How would a patriot act?‘:

1. Greenwald “the patriot” once evoked the Nazi conquest of the Sudetenland in criticizing the US-led mission to topple Saddam Hussein:

Those who perpetrate wars of aggression invariably invent moral justifications to allow themselves and the citizens of the aggressor state to feel good and noble about themselves.  Hence, even an unprovoked attack which literally destroys a country and ruins the lives of millions of innocent people — as the U.S. invasion of Iraq did — is scripted as a morality play with the invaders cast in the role of magnanimous heroes.

And, of course, German citizens were told those invasions were necessary and just in order to liberate the repressed German minorities.

It’s difficult to find an invasion in history that wasn’t supported by at least some faction of the invaded population and where that same self-justifying script wasn’t used.  That’s true even of the most heinous aggressors.  Many Czech and Austrian citizens of Germanic descent, viewing themselves as a repressed minority, welcomed Hitler’s invasion of their countries, while leaders of the independence-seeking Sudeten parties in those countries actively conspired to bring it about.

This is obscene. Comparing the Kurds, who had been historically orphaned and then slaughtered with poison gas by Saddam Hussein, with Nazi-loving Sudeten Germans is outrageous. Comparing the United States to Nazi Germany is not merely disgraceful, but revelatory of a twisted, deluded soul

2. Greenwald “the patriot” has hysterically all but accused President Obama of ordering the murder of Muslim civilians:

Extra-judicial assassination – accompanied by the wanton killing of whatever civilians happen to be near the target, often including children – is a staple of the Obama presidency.

The Obama policy of attacking rescuers and grieving rituals continues this weekend in Pakistan.

In February, the Bureau of Investigative Journalism documented that after the U.S. kills people with drones in Pakistan, it then targets for death those who show up at the scene to rescue the survivors and retrieve the bodies, as well as those who gather to mourn the dead at funerals.

On Sunday, June 3, the US targeted mourners gathered to grieve those killed in the first strike.

Killing family members of bombing targets is nothing new for this President.

The US is a country which targets rescuers, funeral attendees, and people gathered to mourn…That tactic continues under President Obama, although it is now expanded to include the targeting of grieving rituals.

As I revealed last November, the source Greenwald provided in support of his allegations that the U.S. intentionally targets Muslim civilians are two articles posted at the Bureau of Investigative Journalism, none of which even minimally back up this extraordinary claim.

Anwar al-Awaki (killed by U.S. forces after Greenwald’s 2011 speech shown below) was a senior ‘talent recruiter’ for Al Qaeda who likely incited the jihadist rampage of the Fort Hood shooter and the attempted attack by the ‘Underwear Bomber‘.  Greenwald can be seen in the following clip (at a Marxism conference) characterizing the violent Islamist extremist as merely someone who speaks up for the civil rights of Muslims.

4. Greenwald “the patriot” argued that even the very word ‘terrorism’, when used by Americans, is inherently racist:

If we’re really going to vest virtually unlimited power in the Government to do anything it wants to people they call “Terrorists”, we ought at least to have a common understanding of what the term means.  But there is none.  It’s just become a malleable, all-justifying term to allow the U.S. Government carte blanche to do whatever it wants to Muslims it does not like or who do not like it (i.e., The Terrorists).

5. Greenwald “the patriot” praised Bradley Manning as a hero who deserves a medal:

Bradley Manning was recently convicted of multiple counts of espionage for disseminating hundreds of thousands of classified diplomatic cables to WikiLeaks – information which was then available to the world, including terrorist enemies of the United States. 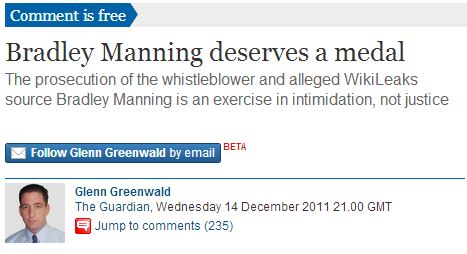 Greenwald’s essay at Comment is Free included the following:

The oppressive treatment of Manning is designed to create a climate of fear, to send a signal to those who in the future discover serious wrongdoing committed in secret by the US: if you’re thinking about exposing what you’ve learned, look at what we did to Manning and think twice. The real crimes exposed by this episode are those committed by the prosecuting parties, not the accused. For what he is alleged to have given the world, Manning deserves gratitude and a medal, not a life in prison.

In short, real American patriots don’t hysterically evoke comparisons between the US military action in Iraq and the Nazi conquest of Europe; they don’t defend Al Qaeda and other dangerous enemies of the country and amplify the message of terrorists by suggesting that the U.S. is engaged in a war against Islam; and they don’t express support for citizens who openly engage in treason.

Whilst it is not surprising that Guardian style leftists support Greenwald, it is troubling that some within the mainstream left, the political center, and even some on the right, continue to treat him as if he was a serious journalist, and thus legitimize his radical, anti-American campaign.