Do ‘Sophisticated’ Brits at the Economist Believe Jews Control Washington?

“The Economist’s goal is to take part in a severe contest between intelligence, which presses forward, and an unworthy, timid ignorance obstructing our progress.” (Economist mission statement)

The Protocols of the Elders of Zion, the czarist forgery purporting to reveal a Jewish conspiracy to control the world, may not, argued Andrew Baker of the American Jewish Committee, “be acceptable dinner conversation any more”.  However, he added, “repackage the sentiment as criticism of Israel, and say that the Jewish lobby controls U.S. foreign policy against ‘true’ American interests, and voilà, you are no longer dabbling in nasty old tropes about sinister Jewish power, but in bold political analysis.”

As we’ve documented previously at this blog, the argument that the power, money and influence of Jewish or pro-Israel groups undermine peace in the Middle East (or even erodes US democracy) is something akin to conventional wisdom within a segment of the British and European Left.

Political cartoons represent an efficient way to transmit such prejudices, and often have a more immediate impact in reinforcing negative stereotypes about Jews than lengthy essays.  And, though the largest output of antisemitic cartoons nowadays come from the Arab and Muslim world, antisemitic motifs advancing canards about Jewish power also appear in Western, putatively liberal, publications.

Interestingly, the Economist article in question (A big gap to close, Jan 18), which provides analysis on the “joint plan of action” negotiated recently between Iran and six world powers “to temporarily freeze Iran’s nuclear programme” doesn’t use the words “Jew”, “lobby”, or “AIPAC”, and the only allusion to the Peter Schrank cartoon editors chose to use in the article can be found in the text we highlighted in the opening passages:

AFTER several weeks of unexpectedly hard and often tetchy bargaining, six world powers and Iran reached an agreement on January 12th that sets out the details of a “joint plan of action” (JPA) to freeze Iran’s nuclear programme for six months. The implementation of the JPA, originally negotiated in November, will begin on January 20th…

However, the clock is now ticking on efforts to achieve a comprehensive long-term pact. Even supporters of the interim deal rate the chances of success as low.

Though hailed as an historic breakthrough by some and a terrible blunder by others (notably Binyamin Netanyahu, Israel’s prime minister), the November deal may be best seen as a six-month truce to buy time. Gary Samore, who was Barack Obama’s adviser on arms control until last year and is now at Harvard’s Belfer Centre, points out that neither side has given away any of its big bargaining chips. Most actions being taken are reversible; the trickiest issues have been kicked down the road.

Their reference to the Israeli prime minister takes on relevance further in the piece:

A series of extensions will happen only if those hostile to the interim deal on both sides hold their fire. Yet support has grown in Congress for legislation to bring in new sanctions against Iran. With support in the Senate getting close to the 67 votes needed to override a presidential veto (which would otherwise be exercised), they remain distinctly possible, though the White House doubts that Democratic senators would go so far while an accord was still in place. Mr Samore reckons that Congress, having a version of the “Nuclear Weapons Free Iran Act” ready as a threat, might put useful extra pressure on Iran. But were the sanctions now to become law, “it would just kill the interim agreement”.

Schrank’s cartoon then is arguably designed to illustrate the forces – on both the US and Iranian sides – who are conspiring to “kill the interim agreement’. 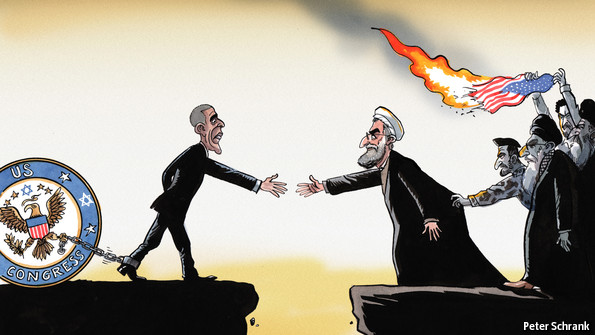 Schrank, a cartoonist with The Independent and Economist, by use of the Star of David on the left, is suggesting that Israel, the pro-Israel lobby, or Jews are controlling Congress and working against a peace agreement between the U.S. and Iran – echoing a disturbing, if familiar, tradition of antisemitic imagery: 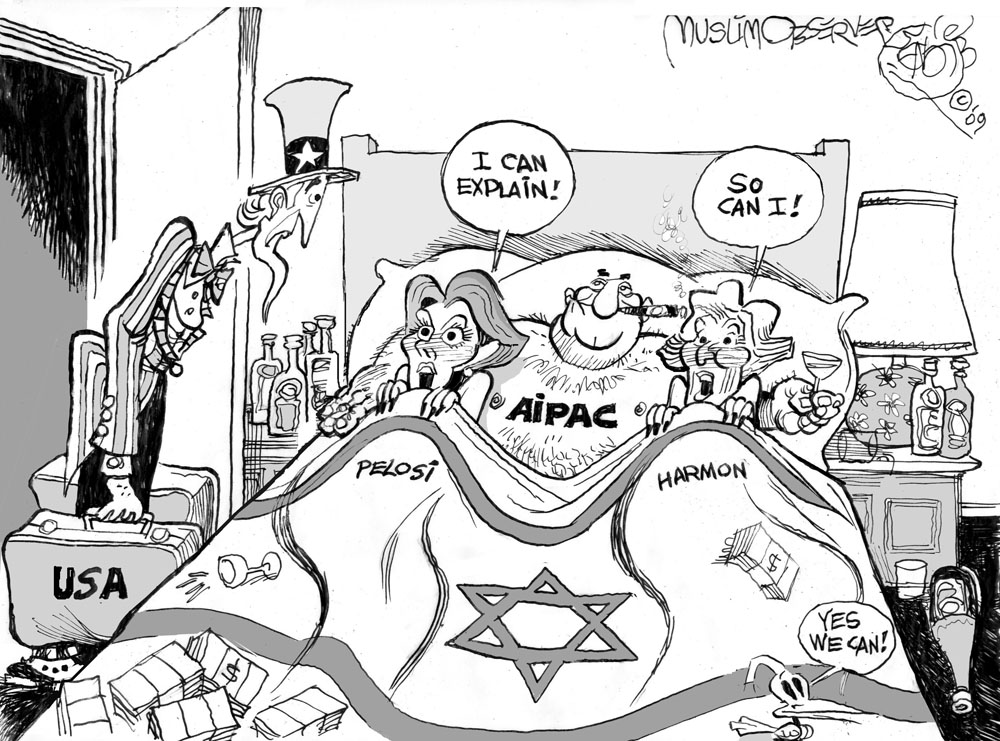 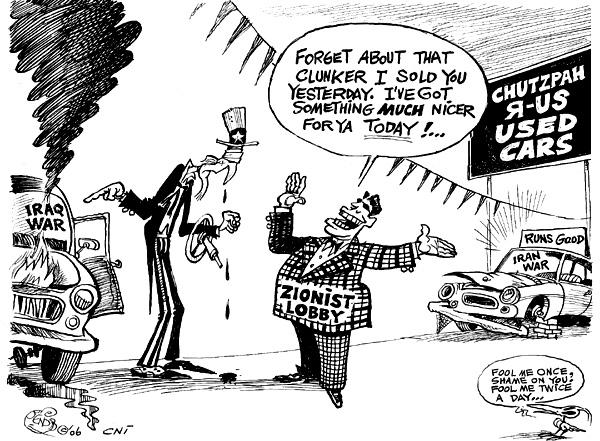 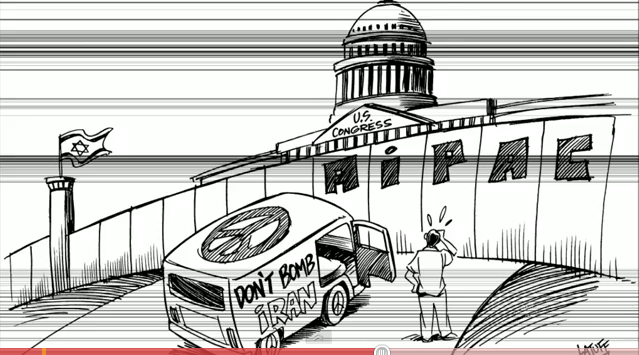 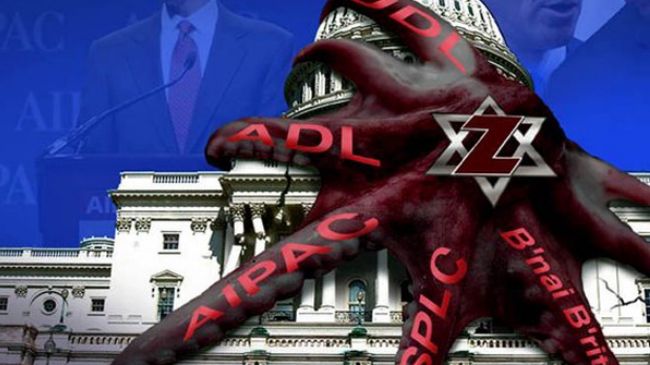 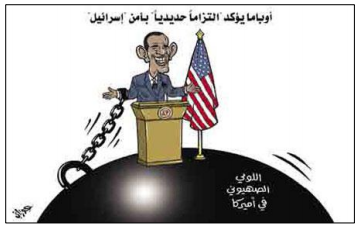 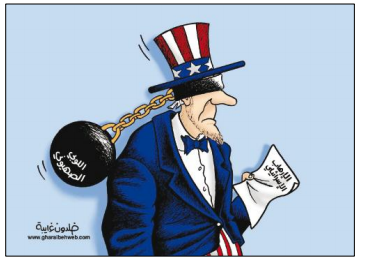 Ar-Rai (Jordan), January 14, 2012.
The American is holding a
document titled: “Israeli terror.”
On the iron ball: “The Zionist
Lobby.” 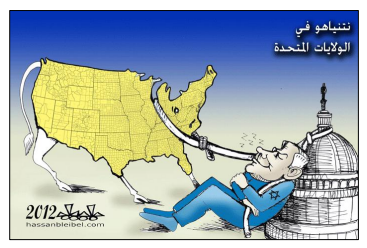 Whilst Schrank’s imagery may not be as explicit as the other examples we’ve cited, all (to varying degrees) convey to readers the unmistakable message that Jewish elements are dictating and shaping American foreign policy for their own malevolent ends.  Such a world view echoes well-established Judeophobic calumnies, and we would hope that evoking such crude stereotypes would be considered a liability by any serious mainstream media outlet – especially one which fancies itself a sophisticated, enlightened force battling the “timid ignorance” which “obstructs our progress”.

Regardless of the Economist’s intent, it’s difficult not to be dispirited by the fact that less than 70 years after the Holocaust, with Jews representing less than 2% of the U.S. population, tropes and graphic representations warning that Jewish ‘pressure groups’ are too powerful are once again becoming fashionable amongst the opinion elite – the herd of ‘independent minds’ who carelessly reinforce the idea, without being haunted by its lethal history, that Jews control Washington.