Watchdog: Unclear if Spike in Antisemitic Incidents Across US Campuses Since Presidential Election is Coming From Left or Right 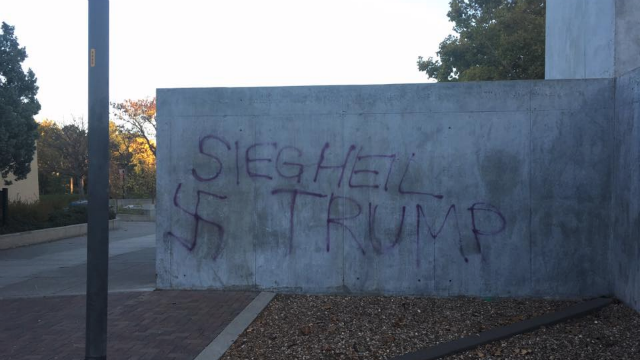 Antisemitic graffiti at the University of New Mexico found days after the election. Photo: UNM Hillel.

The motivating forces behind the major spike in antisemitic incidents at universities across the US since the November 8 presidential election remain unknown, the head of a leading campus watchdog group told The Algemeiner on Thursday.

“We don’t know where a vast majority of these incidents are coming from,” AMCHA Initiative co-founder Tammi Rossman-Benjamin said, referring to a string of graffiti attacks featuring Nazi symbols and phrases. “They may be coming from neo-Nazis, who view comparing President-elect Donald Trump to the Adolf Hitler as the highest praise, or from those who are so anti-Trump that they equate him with the Nazi leader.”

Either way, she said, “as a Jew, you know it’s not coming from a good place, whether it emanates from the Right or the Left.” She added that though, for the most part, Jewish students have not been specifically targeted, “Understandably, the swastika is alarming and elicits fear and disgust among them.”

She also praised university administrators for taking the phenomenon seriously.

Swarthmore officials, for example, vowed to “banish these acts of hatred from our campus” and do “everything in our power to identify the perpetrators.” At Keene, administrators said they would “exhaust all avenues” to track down perpetrators. And New York University is working in tandem with police to investigate its own latest incident.

This month alone, some 40 cases of swastika graffiti and scrawling of anti-Jewish slurs have been reported on American campuses.