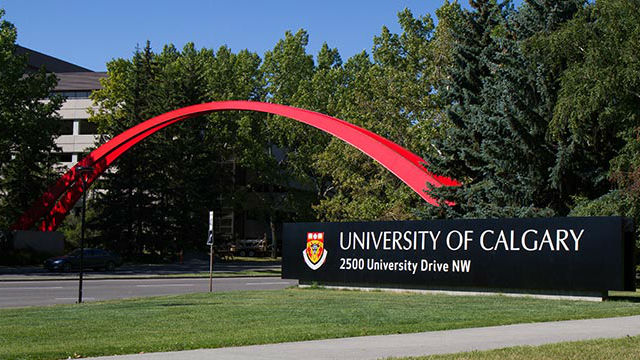 University of Calgary campus. Photo: U of C.

Posters questioning the Jewish death toll in the Holocaust were found last week on the campus of the University of Calgary in Canada, the student newspaper The Gauntlet reported.

The posters asked, “If the ‘5 million’ didn’t die, did the ‘6 million’ really die?” — referring to the ongoing debate over the number of non-Jews killed in the Holocaust as a way of expressing skepticism about Jewish casualties.

They also pointed readers to the works of some notorious Holocaust deniers such as Ernst Zundel and Robert Faurisson.

Maureen Hiebert, a political science professor at the university who specializes in genocide studies, told the student newspaper that the Committee for Open Debate on the Holocaust (CODOH), which took credit for the posters, is a “website for Holocaust deniers, although it says the site is dedicated to those who wish to debate what they dismiss as ‘Holocaust orthodoxy.’”

“What this means in reality is that they challenge the fact that the Holocaust happened and that it happened the way it happened, including challenging the intent to exterminate Europe’s Jews as well as the number of Jewish victims,” Hilbert said.

Hillel Calgary Director Jordan Waldman condemned CODOH for “tak[ing] an academic debate around the five million that died and fram[ing] it around the legitimacy of the Holocaust itself.” According to The Gauntlet report, approximately 12 posters were removed by students and staff and handed over to campus police, a move praised by Ryan Bellerose, Western Advocacy Coordinator of B’nai Brith Canada’s League for Human Rights.

Bellerose also said in a statement that the “hateful and manipulative posters” were “part of a systematic campaign to spread far-right antisemitism on Canadian campuses.”

U of Calgary officials stated, “Along with a commitment to free inquiry, open debate and diversity of opinion, the university is committed to sustaining a safe, healthy, inclusive and respectful academy that supports excellence in teaching and research.”

Fliers denying the Holocaust have been cropping up at schools worldwide. Earlier this month, as The Algemeiner reported, some were found at Cambridge University in Britain, and in September, thousands were distributed at Australian colleges.