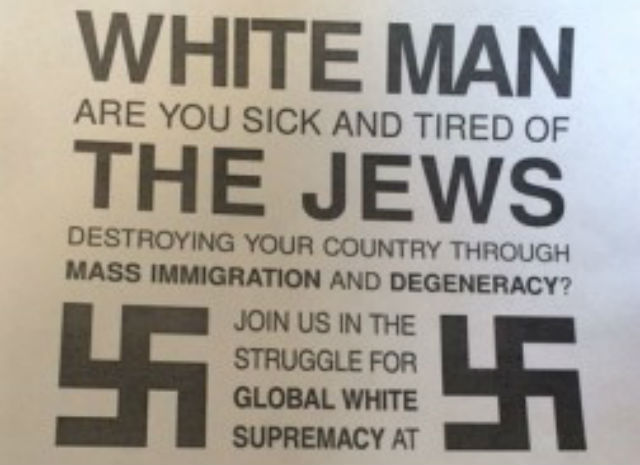 A leading Jewish human rights organization said on Monday that it has recorded an unprecedented number of incidents perpetrated by white supremacists and alt-right groups on US campuses since September.

In a statement, the Anti-Defamation League (ADL) attributed the 107 cases found by its Center on Extremism of antisemitic and other racist flier-distribution at more than 60 schools across the country — and a “surge of activity” in January — to the “current political climate.”

Saying that white supremacists have become “emboldened by the 2016 elections,” the ADL pointed to the many incidences of antisemitic and anti-Muslim material emerging from university fax machines and other endeavors that have been going on for months.

ADL CEO Jonathan Greenblatt said that though such efforts have been made in the past, “Never have we seen antisemites and white supremacists so focused on outreach to students on campus.”

A recent example of this, reported by local paper My San Antonio, occurred on Friday at Texas State University, where school officials removed, for the fourth time since November, a flier saying, “White man, are you sick and tired of the Jews destroying your country through mass immigration and degeneracy?” – flanked by swastikas.

Similar fliers were found at Vanderbilt University in January, as reported by The Algemeiner, after campus printers began to churn them out as part of a cyber attack.