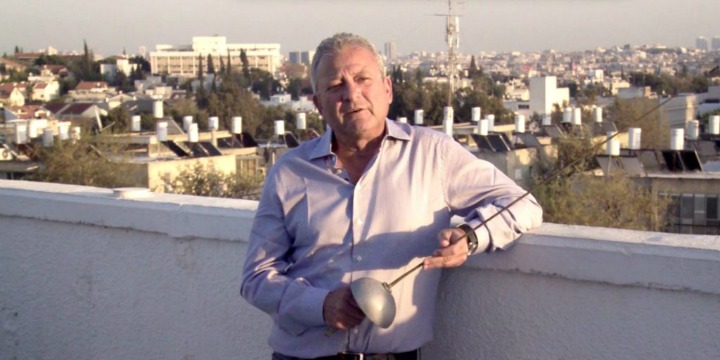 Dan Alon, a survivor of the massacre of Israeli athletes at the Munich Olympics in 1972, in a scene from Bo Persson’s documentary ‘Watching the Moon at Night.’ Photo: Screenshot.

Audiences in Israel are currently flocking to see a Swedish film about the relationship between terrorism and antisemitism that Swedish national TV, which partly financed the production, continues to refuse to screen.

“Watching the Moon at Night,” directed by the veteran Swedish documentary-maker Bo Persson, will be playing to a sold-out audience at Jerusalem’s Cinematheque on Monday night, following screenings this week in Tel Aviv. The 90-minute documentary has been shown at film festivals in 12 different countries since its release in 2015, but Sweden’s national public television, SVT, has refused to air it because of pressure from a small group of executives who object to the portraits of Israeli victims of terrorism in the film, Persson told The Algemeiner on Friday.

“Many people in Sweden were shaken by this decision,” Persson said. “Sweden is a fairly open and democratic society, so when Swedish TV decides to cancel a film that they themselves were involved with, that leaves people shocked and bewildered.”

Persson said that the bulk of the film’s financing had been provided by the prestigious Swedish Film Institute, which continues to support the director in his dispute with SVT. He also alleged that editors in SVT‘s documentary film department had breached the broadcaster’s guidelines concerning the editorial independence of outside contributors.

“Several important journalists in Sweden have written big articles defending the film, and 1,400 people have signed a protest letter to the director of Swedish TV, including members of the Nobel Prize Academy and the president of the Swedish Association of Holocaust Survivors,” Persson said. “But they still won’t show the film.”

Persson said that he and his colleague Joanna Helander spent five years working on the film, which includes harrowing interviews with survivors and relatives of terror attacks and insightful analysis from some of the leading scholars of antisemitism. Dan Alon, a fencer who survived the 1972 Palestinian terrorist atrocity against Israeli athletes at the Munich Olympics, features prominently, as does Arnold Roth, whose 15 year-old daughter Malki was murdered in a Palestinian suicide bombing attack on a Jerusalem pizza restaurant in 2001. Among the authorities on antisemitism who appear are two leading academics who have passed away in the last two years — Professor Robert Wistrich of the Hebrew University, and Andre Glucksmann, the French philosopher and writer.

Part of the inspiration for the documentary, Persson said, came from his good friend Professor Walter Laqueur, one of America’s most distinguished historians. “I went with Walter to his German birthplace, Breslau, which is now Wroclaw in Poland,” Persson recalled. “Walter left Germany two days before the Kristallnacht pogrom in November 1938, and my dialogues with him were part of the reason I did the film.” More broadly, Persson said, he was acutely aware of the “cognitive war” in Sweden and much of Europe, “where very distorted pictures of Israel and its history are being broadcast.”

“I wanted to do something to counter this disinformation,” Persson said. “So little attention is paid to the fate of victims of terrorism, I decided to focus on that.”

Persson expressed concern that SVT‘s refusal to show his documentary will compel other filmmakers to engage in self-censorship when dealing with the Middle East.” Artists are censoring themselves to remain part of the media,” he said. “They don’t want to be punished by the BDS movement, which is very influential in the European filmmaking community, with the support of people like (award-winning British director) Ken Loach.”

Persson noted that he had shown his own films “in Israel for the last twenty-five years at various festivals, so I am on the BDS blacklist.”

“I wear that as a badge of honor,” he emphasized.