After Trump’s Syria Betrayal, Can Jews or Anyone Really Trust Him? 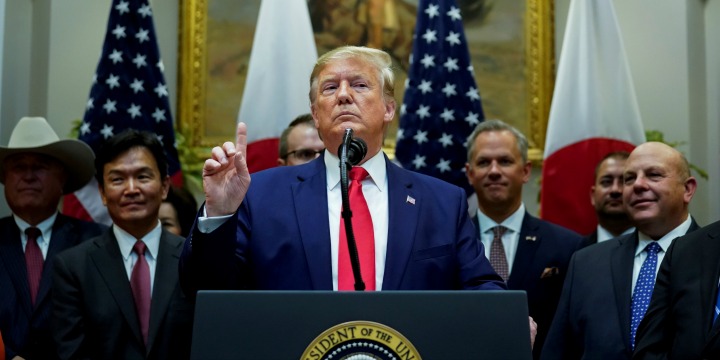 For many American Jews, a candidate’s attitude and policy positions on Israel are important, and for some, it is the one issue that determines their vote. I fall somewhere in between, as Israel is very important, but all other things being equal, I will choose the candidate whose views on a range of economic, social and strategic issues most closely resemble my own. Even more important, however, is how a politician reacts to the threat of genocide.

My attitude is largely shaped by the research I did for my book, Forgotten Victims: The Abandonment of Americans in Hitler’s Camps. Of the many shocking revelations in the book, for me the two most significant were that American Jews were in concentration camps and that the US government did little or nothing to help them — and in some cases put obstacles in the path of Jews to prevent them from escaping the Nazis when they could.

The betrayal of our own citizens was rooted in the State Department, which at the time had its share of antisemites, but also officials who did not see the need to protect American Jews, viewed helping them as a hindrance to the war effort, or rationalized that they could not single out the Jews for saving among all the other suffering peoples. Ultimately, however, the buck stopped with the president. Others have documented FDR’s failure to do more to prevent or at least minimize the murder of European Jews, but I discovered he had essentially the same attitude toward American Jews.

The lesson for me was that Jews cannot be sure that the American government will always protect us or come to the aid of our brothers and sisters elsewhere. Hence, when I see any people being slaughtered in other parts of the world with impunity, my question is whether US policy would be the same if those people were Jews.

With impeachment in the headlines, we are reminded of the Clinton administration. Many people lost faith in the president when he lied about the Lewinsky affair. He lost my support, however, long before.

What if Bosnians were Jews? The question has haunted me from the beginning of the war and the first reports of the Serbian campaign of ethnic cleansing. Having just returned from Yad Vashem and having recently published a book documenting how the US government abandoned its own citizens during the Holocaust, I might be hypersensitive to the events, but I find the callousness of the rest of the world appalling. If no one will lift a finger to prevent the slaughter of innocent Muslims, why should we expect Jews to be treated differently?

The Clinton administration stood by and watched while people were massacred. The mistake was repeated when the slaughter began in Kosovo. It took more than a year before NATO launched air strikes in Yugoslavia.

In those cases, Clinton committed what to me was the unpardonable sin of acting as a bystander to genocide. Now, we are witnessing a case where an American president has gone a step further and given his permission for Turkey to wipe out the Kurds in Syria.

As others have noted, the Kurds were allies in our fight against ISIS. Thousands fought and died in this common effort. The president’s reasons for his actions are both absurd and offensive. He claims he is just fulfilling a campaign pledge to get American troops out of foreign entanglements, but the number of forces in Syria were trivial. They were, however, sufficient to deter Turkey from engaging in genocide. More preposterously, he said that we had no obligation to support the Kurds because they did not fight with us at Normandy in World War II.

Which brings me back to my question: What if we were talking about Jews instead of Kurds?

Is there any reason to believe the president would act differently and protect the Jews? There might be some uproar, even among some in his base, but has Trump shown any willingness to listen to anyone? Why would a “foreign entanglement” to prevent the murder of Jews be more acceptable to him? Should Jews place their faith in the fact that his daughter and son-in-law are Jewish?

Jewish supporters of Donald Trump have justified ignoring everything else he has said and done because he has adopted policies favorable to Israel. But how does withdrawal from Syria help Israel? How does his failure to act against Iranian expansionism help Israel? Will his willingness to meet with the Iranian president and possibly make a deal that frees them from sanctions help Israel? Do his defenders remember when Trump said that Israel “will have to pay a higher price” in negotiations with the Palestinians for the positive steps he has taken.

Just as Obama’s decision to abandon Egyptian President Hosni Mubarak after popular protests made our Middle East allies question America’s commitment to their regimes, so too does Trump’s decision regarding Syria. The Saudis have already seen how Trump failed to respond to a direct attack on their oil facilities by Iran, so how can they count on the US to keep their royal heads on their shoulders?

Even Israeli Prime Minister Benjamin Netanyahu had to speak out, because of the possible implications for his country of a US president who puts political calculations ahead of the strategic interests of the United States and the interests of our allies. While loathe to criticize the president, Netanyahu reminded everyone that Israel can and will defend itself if necessary.

The prime minister knows, however, that American economic, diplomatic, military, and political support is vital to Israel’s survival. We just observed the anniversary of the Yom Kippur War, the outcome of which depended on more than the fighting spirit of the IDF. Without the support of President Richard Nixon, and the airlift of emergency aid, the result might have been different. Would President Trump come to Israel’s assistance if requested should, for example, Iran attack?

Can anyone say with confidence that US policy would be different if we were talking about Jews instead of the Kurds?