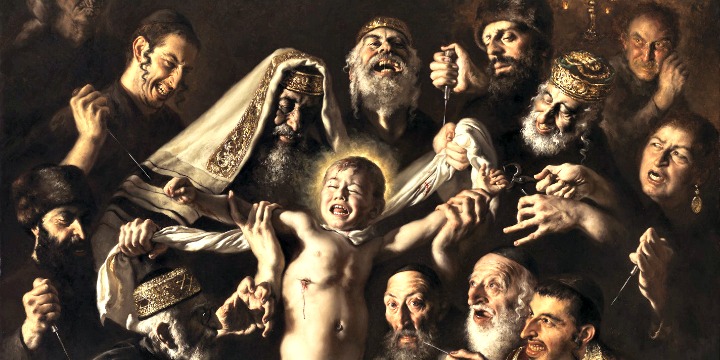 An Italian painter whose work has been honored by the Catholic Church for its devoutly Christian themes and masterful baroque style unveiled his latest canvas this week — a grotesquely antisemitic depiction of hook-nosed Jews engaged in the “ritual murder” of a terrified Christian infant.

Giovanni Gasparro, an artist based in the Adriatic port city of Bari, uploaded images of the 7ft X 5ft painting that revives the antisemitic blood libel of medieval times onto his Facebook page on Tuesday.

That the painting is replete with the basest antisemitic tropes is instantly apparent. Titled “The Martyrdom of St. Simon of Trento in Accordance With Jewish Ritual Murder,” it shows an infant boy surrounded by a crowd of sinister Jewish men, variously wearing side-curls and religious items, who strangulate him, cut him open and drain his blood. Gasparro’s brush purposively accentuates the stereotypes of classic antisemitism: large hooked noses, yellowing uneven teeth, blood-stained fingers and visceral pleasure at forcing a non-Jewish child to suffer in a manner reminiscent of Jesus on the cross. As the child in the painting weeps with fear, the Jewish figures cackle and laugh with manic energy.

The historical event on which Gasparro’s painting is based occurred on March 21, 1475, when the disappearance of a two-year-old child named Simon in the northern Italian city of Trento sparked one of the most notorious episodes in the 900-year history of the blood libel. When the body of a little boy was discovered later that week — according to local rumor, in the cellar of a Jewish man named Samuel — a storm of anti-Jewish fanaticism erupted during the Christian holiday of Easter. The entire Jewish community was arrested and forced to confess under torture to having murdered Simon in a bloody ritual, with 15 of its leaders burned at the stake.

In later centuries, Simon was regarded as a martyr by the Catholic Church. That status was removed by Pope Paul VI in 1965 when the Vatican issued “Nostra Aetate” — its historic repudiation of antisemitism and the “deicide” charge that held the Jews collectively responsible for the death of Jesus at the hands of the Roman Empire.

An artist who concentrates primarily on devotional Christian themes, the 36-year-old Gasparro has been hailed by some art critics for his technical brilliance, as well as his choice of figurative painting over more modern forms of artistic expression. But with this latest work, Gasparro seems determined to revive the tradition of Christian antisemitism as well. Writing about the blood libel painting in the Italian Jewish publication Mosaico on Thursday, the Italian-Jewish commentator Ester Moscati noted Gasparro’s dedication to “sacred art — with a particular taste for the macabre and the grotesque (lots of flesh and lots of blood).”

Moscati concluded with the observation that Gasparro was now directing his mastery of painting “to a work that is full of anti-Jewish hatred, as if he felt the need, at a time when the fake news is going crazy, to dust off [similarly fake news] from the dark and gloomy past.”

Gasparro has exhibited his work in Italy and other countries for more than 20 years. His career highlights have included solo exhibitions in Paris in 2009 and at the Venice Biennale in 2011.

Also in 2011, Gasparro was commissioned by the Catholic Archdiocese of Italy’s L’Aquila region to restore a medieval basilica that had been badly damaged in an earthquake. In 2013, he was awarded Italy’s prestigious Pio Alferano prize for “young and talented artists.”