Earlier this month, under Israeli pressure, some Arab banks doing business in the territories stopped paying stipends and salaries to former Palestinian prisoners and families of current prisoners.

A few days ago, the Palestinian prime minister responded to the news in his speech at the opening of his weekly cabinet meeting, saying, “The occupation is launching a campaign of terror about the payments to the prisoners using a legal attack against banks. The payments to the prisoners is sacred to us and we will not accept Israel’s actions. … We are looking for solutions that protect the payments to prisoners on the one hand and protect banks from the threat of occupation on the other.” [emphasis added]
Interestingly, a poll done earlier this year showed that Palestinians are not nearly as supportive of paying prisoners and their families as they had been in the past. A February survey by the Washington Institute showed that 68% of Palestinians in the West Bank agree (or somewhat agree) that prisoners do not deserve extra payments from the government, a huge increase from the 43% who held that opinion last year. 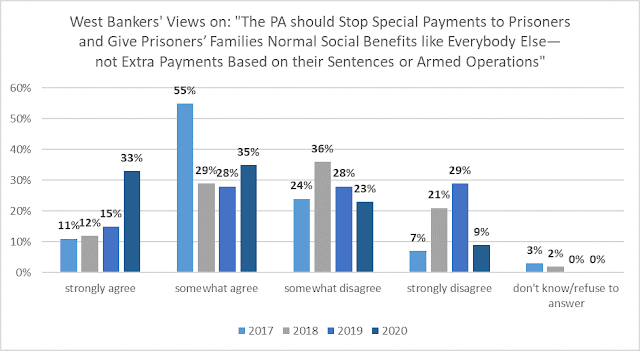 The bad news is that Israel has restored all the money withheld for prisoner payments — and more — last week, with an 800 million-shekel loan to the Palestinian Authority (PA) to help its economic crisis. These loans are generally not expected to be repaid. So while Israel doesn’t want an unstable PA, which is understandable, the PA is saying explicitly that it will continue to prioritize paying terrorists, perhaps over other issues, including fighting COVID-19.
The opinions presented by Algemeiner bloggers are solely theirs and do not represent those of The Algemeiner, its publishers or editors. If you would like to share your views with a blog post on The Algemeiner, please be in touch through our Contact page.