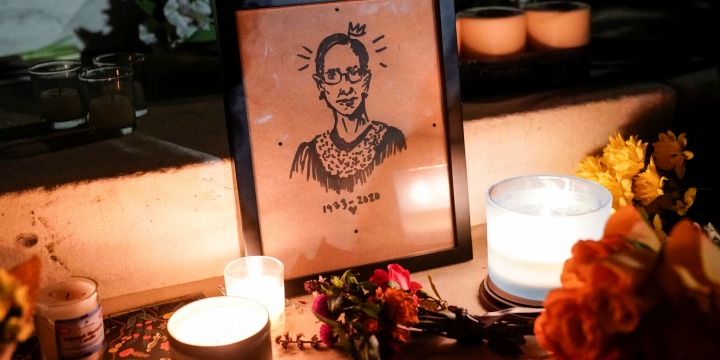 Candles are lit next to an illustration of late Supreme Court Justice Ruth Bader Ginsburg, outside the US Supreme Court in Washington, DC, Sept. 19, 2020. Photo: Reuters / Joshua Roberts.

Jewish groups are paying tribute to late US Supreme Court Justice Ruth Bader Ginsburg following her death at the age of 87 on Friday.

“We are deeply saddened by the passing of Supreme Court Justice Ruth Bader Ginsburg, who was in her own words ‘a judge, born, raised and proud of being a Jew,’” the Conference of Presidents of Major American Jewish Organizations stated.

“Justice Ginsburg, the first Jewish woman to serve on the high court, sought to apply the values of her faith in seeking equal justice under law and had a lifelong love for Israel,” it said. “She is recognized as among the great jurists in modern history. She never ceased to advocate for gender equality while leading the way for women in the legal profession.”

“She was an inspiration to millions,” the statement noted. “Her passing is being mourned across America, and she leaves an historic legacy that will be studied with reverence for generations to come.”

American Jewish Committee CEO David Harris eulogized Ginsburg as “a giant of American jurisprudence” who “exemplified courage and conviction throughout her life.”

World Jewish Congress President Ronald Lauder commented, “As Jews across the United States and the world welcomed the hope that comes with the first night of Rosh Hashanah, we learned of the devastating loss of Supreme Court Justice Ruth Bader Ginsburg.”

Ginsburg, Lauder added, was “a trailblazer on behalf of gender equality, and she paved the way for women in the law and on the courts.”

“She fought fiercely and unflinchingly to advance and defend the rights of women and minorities, and, in the tradition of Justices Louis D. Brandeis and Benjamin Cardozo, embodied the principle of equal justice for all under the law, as well as the Jewish value of ‘tzedek, tzedek, tirdof’ — ‘justice, justice shall you pursue,’” he recalled.

The Anti-Defamation League said Ginsburg’s “brilliance, passion and strength were an inspiration to all.”

B’nai B’rith International remembered Ginsburg as “a champion to many women and others as a strong, progressive voice on the court with a trailblazing judicial presence.”

“Her unique and esteemed, groundbreaking career was often informed and influenced by her Judaism,” it pointed out.

In a joint statement, the Union for Reform Judaism, Central Conference of American Rabbis and Women of Reform Judaism said, “Few people have had as long or as profound an impact upon the course of a nation as did Justice Ruth Bader Ginsburg. As an attorney, Justice Ginsburg committed herself to advancing women’s rights at a time when women were denied equal access to educational, employment, economic and other opportunities. Such injustice offended Justice Ginsburg as a woman, but also as a Jew.”

“Indeed,” the statement continued, “she spoke often of the many ways in which her Jewish upbringing and faith shaped her sense of justice, including the discrimination against Jews that was part of life even in her native New York City during her formative years.”

Condolences over Ginsburg’s death were also expressed by top Israeli officials, including Prime Minister Benjamin Netanyahu, who stated, “I join the American people in mourning the passing of Ruth Bader Ginsburg, one of the great judicial leaders of our time. She was proud of her Jewish heritage and the Jewish people will always be proud of her.”

Israeli President Reuven Rivlin tweeted that Ginsburg was “a passionate champion of justice, democracy and equality under the law.”