The video is just over two minutes long, but it sure is disturbing. Blindfolded Palestinian detainees appear next to an image of American police in riot gear.

In the video posted to its Facebook page on Wednesday, American Muslims for Palestine (AMP) claimed that programs that take American police leaders to Israel “only exacerbate US law enforcement officials’ disproportionate use of force, especially against people of color.”

“Participants’ pre-existing notions of militarized security were reinforced by the Israeli officials who teach the methods of mass surveillance, racial profiling, violent repression of protests, infiltration of communities, and the militarization of border security,” a narrator says.

It’s an extension of an ongoing campaign to connect the training programs to American police violence, in hopes of persuading local governments to prohibit their law enforcement agencies from participating. The AMP video ends by directing viewers to a website called “Deadly Exchange,” run by the anti-Israel group Jewish Voice for Peace (JVP).

JVP did not start the campaign to end police exchanges in Israel, but it became one of the effort’s leaders in 2017 when it launched a concerted campaign under the banner “Deadly Exchange.”

The campaign, and its reliance on unsubstantiated allegations and antisemitic roots, were the subject of a two-part investigation published last week by the Investigative Project on Terrorism (IPT).

JVP’s update is an indirect acknowledgement that the campaign was rooted in a hyperbolic, antisemitic smear. And our investigation showed how rhetoric falsely linking Israeli police training to American police killing black people has been repeated by Israel-bashers like Linda Sarsour, Marc Lamont Hill, and Nation of Islam leader Louis Farrakhan.

Despite its new disclaimer, JVP has not acknowledged its own role pushing the kind of antisemitic rhetoric it now warns against. Despite engaging in rhetoric it now says “provides fodder for those racist and antisemitic tropes,” it wants people to believe the rest of the campaign is grounded in truth. That’s simply not the case.

The IPT spoke with police exchange organizers and participants. Each said the programs contained no hands-on training of any kind. And rather than pushing a message of oppression, the chiefs said the programs emphasized the importance of good community relations, of making sure disparate community voices are heard.

“So I knew my experience was nothing even close to what [critics] were trying to portray or what they’ve said was the purpose of the training, the executive level leadership training,” Fayetteville, North Carolina police chief Gina V. Hawkins said. “Definitely, none of the information in regards to any type of policing that’s against any type of demographics, because that, one, would go totally against my beliefs, and totally against the beliefs of law enforcement, the professional law enforcement that we know.”

When the AMP video claims that the programs “exacerbate US law enforcement officials’ disproportionate use of force, especially against people of color,” the video shows a New York Police Department car rolling into a crowd of protesters. 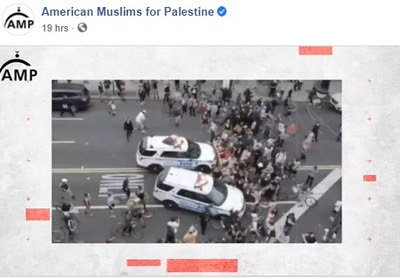 George Turner’s tenure as Atlanta police chief included protests tied to the Occupy Wall Street and Black Lives Matter movements. A CNN report from 2011 showed that Turner’s officers did not use tear gas or any excessive force in finding a middle ground between people’s rights to protest and maintaining order.

In all the years of casting interaction with Israelis as a cause for American police excesses, neither JVP nor AMP nor anyone else has produced a whistleblower to contradict the chiefs’ accounts. And while JVP still calls the program “Deadly Exchange,” there is not one example of anyone being harmed as a result of the police programs.

Hawkins pointed to a general tendency to “repeat what others say without any evidence, or their own experience from what they’ve seen or what they’ve heard. Without any personal experience, they empathize with someone else’s story. Which is good. It’s okay to empathize. But when you repeat it without understanding, or without true facts, we see a lot on social media right now in which people are just retweeting false information, or sharing information without the full story.”

It is important to consider the overall objective held by the police exchange program critics.

JVP members “unequivocally oppose Zionism.” The organization includes Omar Barghouti, the father of the antisemitic Boycott, Divestment, and Sanctions (BDS) movement, on a “Deadly Exchange” advisory board. Barghouti openly admits that he opposes “a Jewish state in any part of Palestine. No Palestinian — rational Palestinian, not a sell-out Palestinian — will ever accept a Jewish state in Palestine.”

AMP “unequivocally supports the right of return” for Palestinians, something which would end Israel’s existence as a Jewish homeland by flooding it with Palestinian “refugees” who are generations removed from any relative who actually lived in Israel or the Palestinian territories.

We get it. They hate Israel and can’t tolerate anything that acknowledges its existence or contributions to the world. Just come out and say it. It would at least be honest and not a perpetuation of this fact-free narrative.

To see part 1 of the IPT investigation, which focuses on JVP’s false narrative, click here. To see part 2, and hear directly from the police chiefs and organizers, click here.

Steven Emerson is Executive Director of The Investigative Project on Terrorism (www.investigativeproject.org). He is the author or co-author of eight books on the Middle East, terrorism, and national security, as well as the producer of two award-winning documentaries and the author of thousands of investigative exposes on Islamist groups in the US, the Muslim Brotherhood, terrorist plots, and the corruption of government agencies in appeasing radical Islamist organizations.