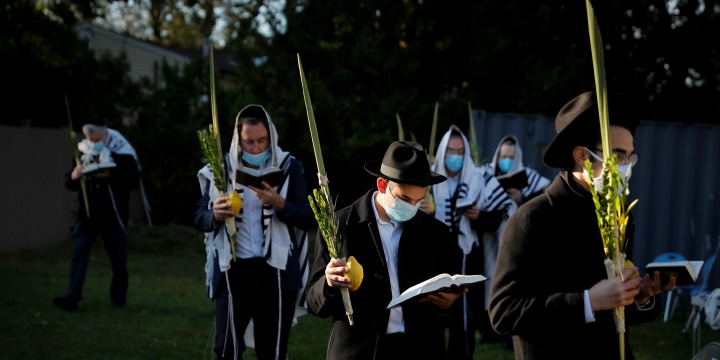 I’ve returned from bringing home my children’s books and supplies yet again. Classrooms outfitted with plexiglass cubicles, stickers directing where to walk, and where not to step. A childhood game of “don’t step on the lines” turned into an anxiety-provoking reality. Perhaps a worthwhile investment, if it would allow them to actually be in school. Which doesn’t seem to be the case, less because of the virus and more because of politics.

Until now I believed people saw me as an individual. That hard work, honesty, and uprightness proved who we are; that it would outperform labels. That we were blessed to live in America, a land espousing this ideal. That I didn’t have to face ugly generalizations my ancestors had to face. It is a tough time to be an Orthodox Jew in New York.

I am overcome by conflicting emotions. Each equally valid, equally painful. I’ll begin with introspection, as is our tradition. Looking inward, assessing what we contribute, what we must change, especially in this season of repentance. I’m embarrassed by the current mention of Orthodox Jews in the media. Less by the mention, more by those who didn’t wear masks, earning us the spotlight. Ashamed, because I’ve woken up to a world calling our name collectively, connected to individuals and views in direct conflict with the basis of Observant Judaism. But as my grandmother often told me, a nearly empty vessel will clatter loudly when shaken, but a full box packed with solid content remains silent.

Empty vessels are making noise in our name, and we cannot remain silent. We cannot remain in our comfort zone, living in quiet humility, doing the right thing. Hoping good behavior will prevail in the end. We’ve woken up to the stark reality, that we’ll all be branded as one, that bad behavior will outshine it all.

I’ve spent 12 years studying science, and I can confidently say, as we attempt to resume life with this virus, there will inevitably be upticks. Responsible science and authority understand that reality. Responsible leadership plans for that eventuality. Containing small fires before they spread. Responsible leaders don’t use fuel and inciteful speech to compensate for lack of a plan.

Orthodox Jewish Schools opened weeks before the public system, who’ve been squabbling with their union. The uptick is partially due to that reality. Intelligently, it could have been used as a model on what to do better, so the broader public would benefit from the early lessons. Instead it was blown into racial strife. Proof that what the mayor called “a time for racial change” is applied at his discretion.

Return to normal life means different things to different groups. A plan must be in place to deal with that reality, dealing with needs of different communities with stronger levels of interconnectedness. Paving a way forward with science, with common sense, and mostly with compassion for human beings, who are the individual parts of every community.

Additionally, there’s an artifact in the data. An inherent flaw in the zip code or block-by-block approach. Unlike other groups Orthodox Jews live in “clusters” due to the interconnectedness of observant Jewish life. When transposing virus cases onto a physical map, our zip codes light up. Not reflected in that is the fact that many cases are within households of large families, and that other groups may not show that unifying theme in zip codes. Other zip codes may simply display economic level. This organization of data denies the ability to see the common denominator for the other cases in the city.  There are two to three times the number of cases in “other zip codes” than in the 12 “Orthodox” ones. Cases which don’t light up zip codes on a map, yet pose a considerable risk, precisely because they are so diffuse. When giving our address at testing, is the purpose for it to be used to condemn or as policy to protect?  Data show men have more cases than women. Should that information be used to go after them, or to sharpen treatment and prevention?

During the Black Plague of the 1300’s, Jews were blamed because of the lower incidence of disease within their “zip code.” They were accused of poisoning wells outside the ghettos. In fact, it was their zip codes, constant ritual hand washing, and bathing for the Sabbath that actually provided protection from the bacteria Yersinia pestis. Bacteria, carried by fleas, rampant outside ghetto walls, where Jews couldn’t easily go. Our lives haven’t changed much, for good and bad. Jews still live together, by choice, not by force. Yet despite claims of an enlightened secular world, rid of old prejudices, many remain desperately entrenched in the Dark Ages.

Orthodox Jews, of all stripes, are family. That doesn’t mean we’ll take blame for individuals’ bad choices. Anyone who is part of a family can understand this concept. Parents work to teach their children values; how children act may not be a reflection of that upbringing. Anyone that has worked to earn their place in life, to live with decency and goodness, would want to be blamed or labeled for their brother’s misdeeds. To be condemned for a relative’s behavior or choices. This is what I’ve grown up thinking. What I, an Orthodox Jewish mother, teach my children. Yet, how do I respond when they ask why news doesn’t feature people like them, who’ve been wearing masks all day in school? Who squint to read the board, through the glare of the plexiglass boxes they’ve been placed in. Why are they saying everyone is doing wrong, when they sit home listening to the rules? When they wear a mask in their own home as elderly grandparents living with them walk into the room? The lump in my throat chokes me. Because despite my teaching them to work hard, be honest, and shine a light wherever they go, the labels placed on them haven’t disappeared. The claim that we live in a new world of “racial change” of seeing the individual, not color or religion, but who they truly are, is only a mirage. It’s only for protesters ransacking NY, for others, never us, who have been cornered into a role for thousands of years.

This is the flip side of my pain. When push comes to shove, I’ll be labeled, bundled with others by zip codes, neighborhood blocks, or someone else’s behavior. Of greatest concern is when leaders begin to speak that way, because the Orthodox Jew is but the canary in the coal mine. Signaling a shift from traditional American values, values that good people everywhere believe. That we don’t label, we deal with individual wrongdoing, with the perpetrator. It’s an easy way to deal with the uptick, shake them all up, close them all down, but is that the caliber of leaders we’ve elected?  A true leader needs tact, needs foresight and understanding of the weight words and choices have. The ripple effects of irresponsibly communicating legitimate issues. We’re desperately living in a time devoid of worthy leadership. There’s no substitute for dealing with the individual during this pandemic. There’s no quick fix. The hatchet approach the governor suggested is the tool of the unskilled. People are robotically believing a geographical map has relevance to the presence of a virus. Viruses don’t see imaginary boundaries. They don’t cooperate with gerrymandering politicians. They just see human beings, ironically, treating all of us alike. Jews and non-Jews. Perhaps teaching us the greatest lesson we should learn once and for all.

Tamara Pluchenik is a PhD candidate in cell biology.