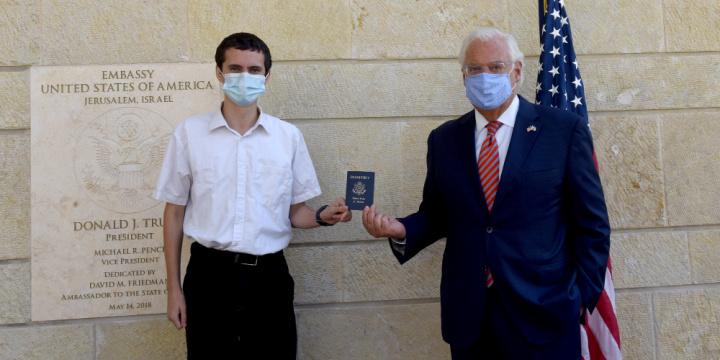 US Ambassador to Israel David Friedman presents Menachem Zivotofsky, a US citizen who was born in Jerusalem, a passport that lists Israel as his birthplace, at the US Embassy in Jerusalem, Oct. 30, 2020. Photo: Debbie Hill / Pool via Reuters.

The United States on Friday issued for the first time a passport to a Jerusalem-born American with “Israel” listed as the place of birth instead of the city.

The US ambassador to Israel presented the document to 18-year-old Menachem Zivotofsky after a change of policy by President Donald Trump that is likely to please pro-Israel supporters ahead of next week’s election, but that Palestinians condemned as a violation of international law.

“You have a nation of birth — the state of Israel,” Ambassador David Friedman told the teenager, thanking Trump for having “set this course in motion.”

A great honor to present the very first passport issued to an American citizen born in Jerusalem with the place of birth designated as “Israel” to Menachem Zivotofsky, who first applied 18 years ago and litigated twice before the US Supreme Court.
Mazal Tov! pic.twitter.com/IIoOkVP3jS

The status of Jerusalem, which contains sites holy to Muslims, Jews and Christians, is among the most contentious issues in the conflict between Israelis and Palestinians, both of whom claim the city as their capital.

Since Israel was founded in 1948, successive American governments declined to recognize any country as having sovereignty over Jerusalem, and State Department policy was to list only the city as a birthplace, leaving resolution of such a sensitive issue to the parties in the dispute.

But, in 2017, Trump recognized Jerusalem as Israel’s capital and, in 2018, moved the US embassy to the city from Tel Aviv.

On Thursday, reflecting those changes, US Secretary of State Mike Pompeo announced the passport policy change.

Americans born in Jerusalem can now list either “Jerusalem” or “Israel” as their birthplace, an embassy official confirmed.

Zivotofsky’s parents had long campaigned for such a change having filed a lawsuit in 2003 in a federal court.

But, in 2015, the US Supreme Court struck down a law that would have allowed Jerusalem-born Americans to list Israel as their country of birth, saying it unlawfully encroached on presidential powers to set foreign policy.

The administration of Trump’s predecessor, President Barack Obama, argued that if the law were enforced it would have caused “irreversible damage” to America’s ability to influence the Israeli-Palestinian peace process. Negotiations between Israelis and Palestinians broke down in 2014.

Trump’s decisions on Jerusalem have been welcomed by Israel, which claims all of the city for its capital, including East Jerusalem, which it captured from Jordan in the 1967 Six-Day War and later annexed in a move not recognized by most of the international community.

But they have been denounced by Palestinian Authority (PA) President Mahmoud Abbas, who seeks to create a future state of Palestine in the West Bank and Gaza Strip — with East Jerusalem as its capital.

Nabil Abu Rudeineh, a spokesman for Abbas, claimed the passport policy change was a violation of international laws and international resolutions.

“Attempts by Trump to impose facts on the ground in a race against time ahead of the US election will not alter the reality,” he told Reuters on Friday.