These bigots attacking @RashidaTlaib, Reema Dodin, & others, might as well just come out & say it: they don’t believe that Palestinians have the right to speak, to act, or really to exist in American public life, at all, as Palestinians. We should not normalize this in any way. 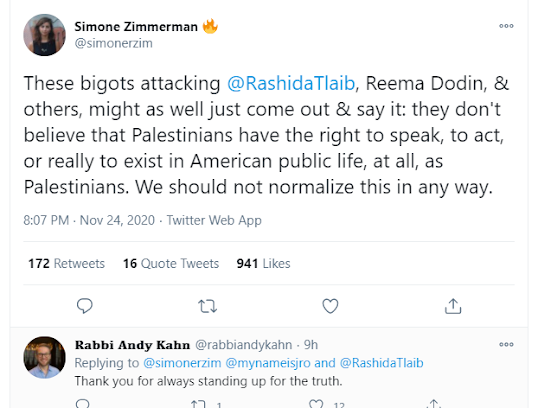 The list of Palestinians who have been in Congress is pretty short: John E. Sununu, Justin Amash, and Rashida Tlaib.

The only one ever attacked as an antisemite is Rashida Tlaib.

Sununu’s father is John H. Sununu, former governor of New Hampshire, who originally objected to repealing the “Zionism is Racism” resolution at the UN. But he then changed his mind and supported the pro-Israel 1988 Republican platform. I don’t recall any Jewish organizations campaigning against him for being a Palestinian.

I’ve never seen any Zioinsts attack Justin Amash, even after he left the Republican Party.

That’s two out of three Palestinian members of Congress that Jews and Zionists have no problem with, which is evidence that Zimmerman is a liar.

Clearly, the Zionists against Tlaib and Dodin are reacting to their statements, not to their heritage.

There are plenty of other decent Arab-American politicians that Zionists have supported: Donna Shalala and Darrell Issa come to mind.

Zimmerman is not defending Palestinians; she is defending those who support destroying the Jewish state.