Why Was Fakhrizadeh Secretly Decorated After the JCPOA Went Into Effect?

JNS.org – The Iranian Islamic Republic made a considerable effort to explain to the Iranian people how grateful they should be to the late Islamic Revolutionary Guard Corps (IRGC) Brig.-Gen. Mohsen Fakhrizadeh, the mastermind and longtime director of the country’s military nuclear program.

The government issued portraits of Fakhrizadeh hugging the late commander of the IRGC Quds Force, Qassem Soleimani, clarifying how these two generals were responsible for the overseeing the regime’s efforts to turn Iran into a hegemonic superpower in the Islamic world, export the Islamic revolution, and acquire a nuclear arsenal.

The regime also released scores of photographs of Fakhrizadeh, some of which it probably shouldn’t have. One picture showed the camera-shy “scientist” joining others in a January 2019 meeting with Iran’s Supreme Leader Ali Khamenei, for example.

Some of the pictures showed Fakhrizadeh receiving a special award from Iranian President Hassan Rouhani for his role in achieving the Joint Comprehensive Plan of Action (JCPOA), also known as the Iran nuclear deal, concluded with the United States, Britain, Germany, France, Russia, and China in 2015. The award was given to Fakhrizadeh on February 9, 2016, shortly after the JCPOA went into effect following the International Atomic Energy Agency (IAEA) certification that Iran had shared all necessary information about the potential military dimensions of its nuclear program. In attendance was one of Iran’s JCPOA negotiators and the head of Iran’s Atomic Energy Organization, Ali Akbar Salehi.

While the other members of the Iranian negotiating team were awarded similar tokens of appreciation publicly a day earlier, Fakhrizadeh was honored in a closed-door ceremony because of the secrecy that surrounded him.

Why was the Iranian leadership so thankful and appreciative to the head of its military nuclear program after the conclusion of a deal that allegedly guaranteed, as president Barack Obama pledged, that Iran’s path to a nuclear weapon was blocked? One would expect Brig.-Gen. Fakhrizadeh to be upset about a deal that limited his work. However, instead, he seems to be happy and satisfied in the picture. Why?

The answer is very simple: It was Fakhrizadeh that instructed the Iranian negotiating team regarding what issues they should insist upon to make sure that the deal improved Iran’s capability to acquire a nuclear arsenal — and he got everything he wanted. He managed to get his way because of the poor handling of the negotiations by the American team. He had every reason to be gleeful. 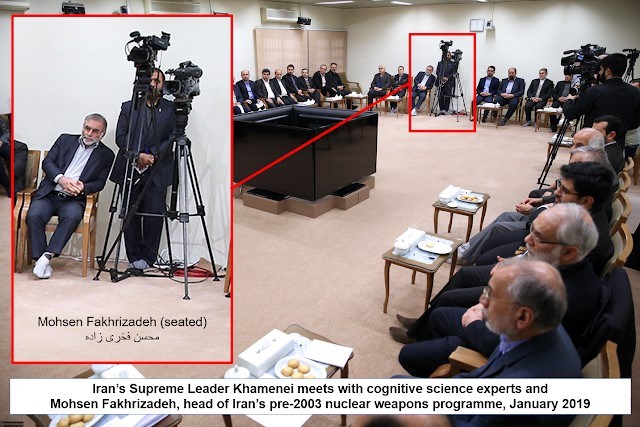 Firstly, he engineered the Iranian negotiations to force the Americans to accept a set of sunset clauses terminating after 15 years. After five years, the arms embargo would be lifted; after eight years, the restrictions on the research, development, and use of advanced centrifuges would be gone; after 10, the limits on the level of uranium enrichment would be lifted; and after 15 years, Iran could enrich as much uranium as it wished, to any level — including to military-grade — and build heavy water reactors that could be used to produce plutonium: an easier path to nuclear weapons.

Moreover, Iran was allowed to keep all its nuclear facilities active, including the secret deep-underground facility at Fordow, erected only for military purposes, and none of its 19,000 centrifuges were dismantled. Six thousand kept enriching uranium, and the rest were either disassembled and kept in underground production halls or used for purposes other than uranium enrichment. No reference was made in the Iran deal to the development and production of delivery systems, namely missiles, and all the international sanctions on Iran were lifted immediately — with a bonus of $1.7 billion in cash.

If this were not enough to justify Rouhani and Fakhrizadeh’s satisfaction, they were also celebrating another outstanding achievement — there was not going to be any real monitoring of the military nuclear program. The monitoring was to be confined only to declared sites. If the IAEA wished to inspect other sites, it had to present a request to a committee and expose the source for the request. And the icing on the cake? The inspectors would not have access to the Iranian scientists, especially not to Fakhrizadeh himself!

On all of those critical issues, the opening position of the American negotiating team was quite different. They sought the dismantling of Fordow and the non-active centrifuges; they wanted the missile issue to be addressed; they were looking for the destruction of the heavy water reactor at Arak; and they were pushing for a much longer set of sunsets and real monitoring. All of those positions were abandoned because some people in Washington — some of whom today criticize the killing of Fakhrizadeh — believed that the stripped-down deal would make Iran give up its commitment to acquiring nuclear weapons and turn it into a positive actor in the Middle East and the family of nations.

So the people in the pictures celebrated. Their path to a large nuclear arsenal was guaranteed. It would take a little more time, but they would not have to cross any dangerous thresholds, face economic difficulties, or fear a military attack on their sensitive facilities. Yes, they had to “come clean” on the potential military dimensions of their program, but Fakhrizadeh knew how to handle this minuscule obstacle. He had a formidable record of cheating the IAEA, as documented in the Iranian nuclear archive spirited out of Iran by Israel in 2018.

He instructed the interlocutors with the IAEA regarding what to tell the inspectors to make sure that then-IAEA Director-General Yukiya Amano would step aside and allow everyone to move on with the JCPOA. After all, Amano was not going to spoil the party. (Fakhrizadeh was probably aware of the rumors that there was an understanding between the United States and IAEA that Amano would not cause trouble.)

Now, in retrospect, we already know that Iran never meant to change its policy and give up the military nuclear project. This is evident from the way they saved their archives, from the contents of the archives, and from everything Iran did after the JCPOA came into effect — especially after the United States withdrew from the agreement in 2018. The Iranians’ problem, though, was that now they had to face a problematic threshold that separated them from accumulating enough fissile material for one to two nuclear devices, as well as painful economic sanctions. Now, Fakhrizadeh is no longer there to lead them to a successful result.

With this background, the incoming US administration must be very cautious. Rejoining a bad deal will make Khamenei, Rouhani, and Fakhrizadeh’s successor smile again. It is time for them to admit the mistakes of the past and learn their lessons. The “maximum pressure” policy gives the Biden administration the leverage to force Iran to accept a much better deal that would really guarantee that the radical Islamic regime in Tehran will not have a nuclear weapon for decades to come. Biden knows it; even New York Times columnist Tom Friedman gave him that advice.

Biden, according to Friedman, said he wants to work together with the other partners of the JCPOA toward reentering the agreement and improving it. Once Biden rejoins the deal, he may use the “snap back option,” the one feature in the deal the Iranians fear. That is an interesting aspect, but why enter a dangerous deal designed by Fakhrizadeh to permit Iran to get whatever it wants without triggering the snap back conditions?

Let us hope the Biden administration will have the wisdom to take advantage of this opportunity.

IDF Brig. Gen. (res.) Yossi Kuperwasser is director of the Project on Regional Middle East Developments at the Jerusalem Center for Public Affairs. He formerly served as director-general of the Israeli Ministry of Strategic Affairs and head of the research division of IDF Military Intelligence.

The full article is available at the Jerusalem Center for Public Affairs.