Palestinians pass by the gate of an UNRWA-run school in Nablus in the West Bank, August 13, 2018. Photo: Reuters / Abed Omar Qusini.

We have seen many times before that UNRWA schools teach students to honor terror and terrorists. UNRWA usually responds that it uses the curriculum and textbooks from its host country, and has no choice in that matter — but that it tries to modify the lessons in ways that are more consistent with UN and human rights principles.

This is a lie.

IMPACT-SE, the NGO that reviews textbooks in the Arab world, has found UNRWA school materials for use by students during times of emergencies, and they were distributed for students learning from home during the pandemic.

The materials are based on Palestinian Authority textbooks, but UNRWA chooses which examples to use and which language to use — the UNRWA logo is on these materials.

For example, these Arabic language materials use the example of the phrase, “With sword and pen we will free the motherland”: 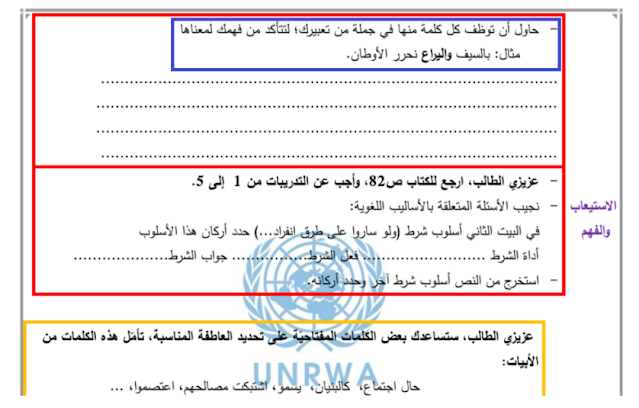 Exercise 2 — determine what is the verb and what is the subject in the following sentences.

. . . The Palestinian died as a martyr to defend his motherland.

3. We shall defend the motherland with blood.

This 7th grade study card uses as an example the sentence, “The scent of musk emanates from the martyr.”

In this 8th grade language example, we see “The mujahideen [raised] the banner of jihad”; “Make sure you stand by your compatriots”; and “The Palestinian will never leave his land, no matter the price.” 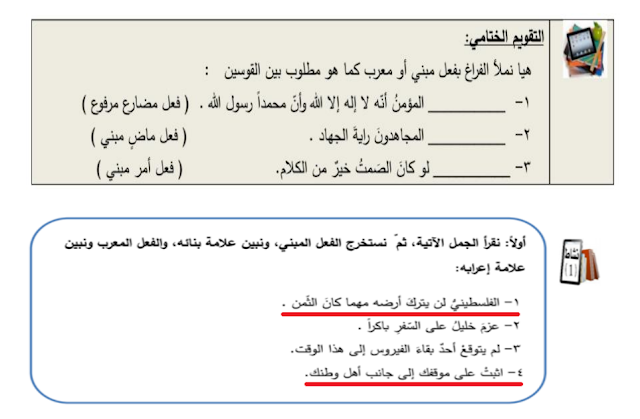 Did UNRWA create these examples itself? IMPACT-SE could not find any corresponding textbook lessons.

In another example, UNRWA materials compare Israeli treatment of Palestinians to the Spanish Inquisition: According to IMPACT-SE:

Seventh-grade UNRWA educational materials claim that the “Zionist Occupation” is using the same methods used by the Spanish Inquisition in the Middle Ages to interrogate “Palestinian prisoners.” Furthermore, there is no mention that victims of the Spanish Inquisition included many Jews; whereas only Muslims are mentioned. The passage is taught in a section about the downfall of Islamic rule in Spain, where expulsion of Muslims by the Spanish rulers is compared to “Zionist Occupation policies”; drawing this comparison is a lesson assignment. Students are given an artist’s illustration of Muslims leaving Spain in 1492, and are asked to compare it to a modern photo that shows Arabs leaving Palestine in 1948; the image does not appear in the original PA textbook (Social Studies, Grade 7, Vol. 2, 2019, p. 29).

A grade 9 social studies text says, “[the Occupation] has turned vast tracts of the West Bank and the Gaza Strip into dumping sites for toxic waste and has sought to pollute the Palestinian environment with radioactive and chemical materials, as well as bomb production projects.”

And, of course, the UNRWA materials erase Israel in maps, and refer to Israeli cities as “Palestinian.” 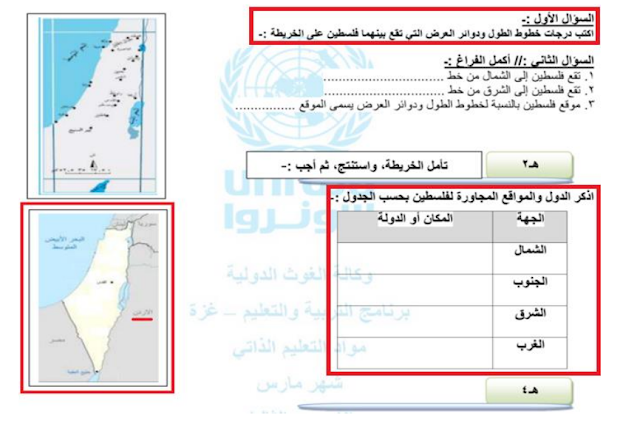 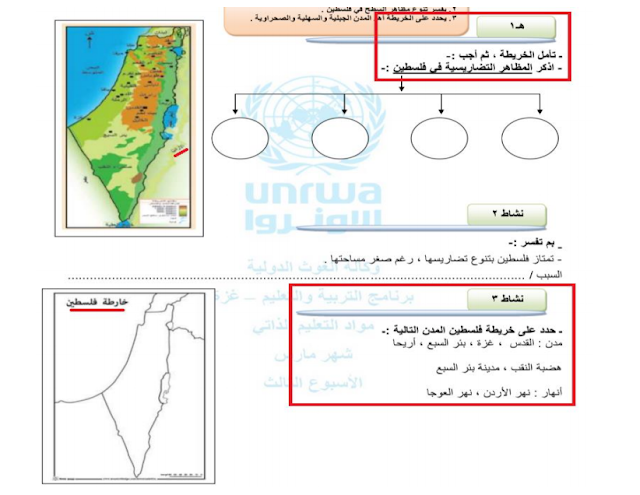 UNRWA is not following its own stated standards, and is teaching hate, glorification of martyrdom, and jihad against Israel that will not end until Israel is destroyed.