The new program carries the same title, “Whose Narratives? Gender, Justice and Resistance,” of a talk that was canceled in September, when Zoom — the online video conferencing service — refused to host the terrorist on its platform.

The same San Francisco State program also is hosting a second Popular Front for the Liberation of Palestine (PFLP) terrorist in a separate event this weekend.

Khaled is a member of the PFLP, which was designated as a terrorist group by the US State Department in 1997. PFLP terrorist attacks have killed more than 20 Americans — aside from the untold Israelis they have murdered.

A Facebook post promoting the event — since taken down — specifically refers to the canceled September 23 program. “This virtual open classroom will discuss free speech, academic freedom, and the dangers of censorship and silencing,” it said, “focusing in particular on the September 23rd open classroom …”

One allied group claims that Facebook removed the post. The promotion still appeared on Eventbrite, but was removed on Thursday after public pressure.

It is unclear whether Zoom has reconsidered its Fall action, or if it was even aware of the revived program. “We are reviewing the facts of this event to determine if it is consistent with our Terms of Service and Community Standards and will decide on an appropriate course of action after that review,” a Zoom spokesperson said in response to questions from the Investigative Project on Terrorism (IPT).

After canceling the September event, Zoom said it “is committed to supporting the open exchange of ideas and conversations, subject to certain limitations contained in our Terms of Service, including those related to user compliance with applicable US export control, sanctions, and anti-terrorism laws.” Khaled’s PFLP membership violated those terms of service.

Zoom’s community standards page still promises to block meetings that celebrate “any violent act that may inspire others to replicate it.” It also says there “is no place for terrorist or violent extremist groups on Zoom, or for those who affiliate with them or promote their activities.”

When she has appeared on Zoom, Khaled has promoted violence against Israelis, couching it in terms of “armed resistance.”

Despite the attention her canceled event received, Khaled spoke at a Zoom videoconference a week later, the IPT reported in October. And she used the platform to advocate for violence.

“We have used all means of struggle, and we are still determined to continue using all means of struggle, including armed struggle,” she said. “Whoever would tell us that this is not your right, I will tell them, ‘go back to history. Go back to history and go back to the United Nations charter.’ The international community recognize[s] that people under oppression have the right to resist.”

San Francisco State Associate Professor Rabab Abdulhadi is listed as the moderator for the April 23 event, which is sponsored by the school’s Arab and Muslim Ethnicities and Diasporas (AMED) Studies program.

“We really idolize somebody like Leila Khaled,” Abdulhadi told a San Francisco newspaper last fall, “somebody who actually stands up for herself, speaks for herself, actually goes to a plane and hijacks it … It’s very interesting because in her film [“Leila Khaled: Hijacker”], she says that it was easier to hijack a plane than to teach a class,” Abdulhadi said. “And somebody, the film director, says to her, ‘Why is that?’ She says, ‘I go to a class and tell the students to be silent; they don’t listen to me. But when I’m on the plane, and I say [to] be silent, everybody listens.’ And to me, it was kind of like it rang a chord with me.”

An El Al flight attendant was shot in one of the hijackings, and one of Khaled’s accomplices was killed by security officials.

Abdulhadi and AMED are also playing key roles in another anti-Israel program that will stream on Facebook this Saturday. 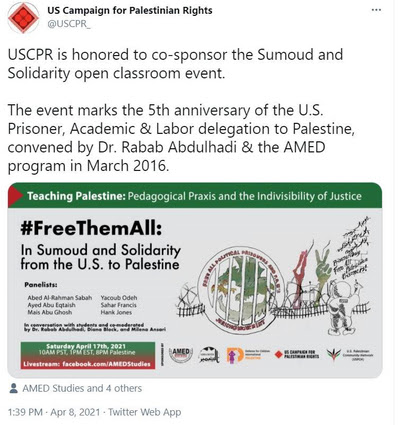 Like Khaled, two scheduled speakers at the event have been identified as PFLP members. According to a Google translation of a 2014 PFLP post, Yaqoub Odeh spent nearly 17 years in an Israeli prison, “carrying a unified message stating the unity of the position of the Popular Front and refusing to be a centrist party regarding the freedom of the Palestinian people and the liberation of their land from occupation.”

The PFLP post doesn’t say what put Odeh in prison. According to the Israel Ministry of Strategic Affairs, Odeh was involved in the 1969 bombing of a Jerusalem Supersol grocery store that killed two college students. One of the ringleaders in that terrorist attack, Rasmeah Odeh, became a national icon for anti-Israel forces throughout the United States during her unsuccessful fight against naturalization fraud charges; she was also embraced as a hero of Palestinian resistance. After her first trial ended in a conviction, Odeh appealed and won a new trial. She agreed to plead guilty and was deported in 2017.

Yaqoub Odeh was sentenced to three life terms, the Israeli ministry wrote, but was released in a prisoner exchange after serving 17 years. Another speaker, Mays Abu Gosh, reportedly is a member of the PFLP’s student arm at Birzeit University.

San Francisco State did not respond to an IPT request for comment about the new programs.

University President Lynn Mahoney stood by AMED after Zoom canceled the Khaled event last Fall. Khaled was not being paid, or speaking on behalf of the PFLP, the school’s president said in a statement.

“The University remains steadfast in its support of the right of faculty to conduct their teaching and scholarship free from censorship…,” Mahoney wrote. “A university can, at the same time, allow its students and faculty the freedom to express contrary, even objectionable, views while also condemning antisemitism, Islamophobia, anti-Blackness, racism, and other hateful ideologies that marginalize people. These are complex issues but universities above all other places should be places to debate and question complexities.”

The problem is, her university isn’t condemning the hateful ideology that AMED is pushing.

A genuine academic pursuit would offer challenging views and contrasting information. But San Francisco State’s AMED program, and Professor Abdulhadi, are more interested in cheerleading for a radical viewpoint that involves eliminating an existing state and killing innocent civilians. It can stand behind academic freedom arguments, but its programs seem reliant on speakers with blood on their hands. The voices of their dead victims are silenced again by not including contrary voices.

Leila Khaled and her sponsor AMED continue to promote violence, and to create new victims at the altar of academic freedom.