But that wasn’t how the media reported the story.

To read any of the reports by The New York Times, the BBC, The Guardian, The Washington Post, or the Associated Press, one could be forgiven for thinking that Palestinian worshipers were severely mistreated or abused by heavy-handed Israeli security forces.

Such a representation is not only a distortion of the facts, but also blurs the bigger picture.

Those were the words on the lips of not hundreds, but thousands, of Palestinians who had gathered at the Temple Mount to mark the last Friday of the month of Ramadan.

And those weren’t the only violent words heard: the familiar old refrain, “With our soul, with our blood, we’ll redeem you, Al Aqsa” was also repeatedly chanted.

Perhaps the most egregious example of the biased press coverage came in a segment by NPR, in which chants were mentioned  — but only those of a small group of Jewish extremists over the last few weeks (2:40 in the audio clip).

The chants in Arabic, sung by thousands of Muslim worshipers during the clashes on Friday night, weren’t deemed worthy of inclusion.

While this went almost entirely unreported by foreign media, Reuters should be credited for being one of the few news organizations that made mention of the incitement to violence.

Thousands of Palestinians in 48 made their way to Jerusalem, were initially stopped by Israeli police so many of them decided to walk. Others forced the roads open خاوة pic.twitter.com/ba1TNF1vrv

In recent days, a legal debate over the fate of a few properties in the Shimon HaTzaddik/Sheikh Jarrah neighborhood in eastern Jerusalem has made international headlines. While it is clear that this issue has been used as a rallying call by rioters in Jerusalem, media reports have oversimplified the narrative, to the point of effectively ignoring Palestinian intolerance.

An article by the BBC published after the Friday night rioting serves as a perfect case in point.

It opened by documenting the number of those injured and noting the weapons used by each side, thereby creating the impression of ‘courageous’ Palestinians underdogs standing up to brutal Israeli security personnel:

The next paragraph frames the issue as arising on the backdrop of another:

Tensions have been rising over the potential eviction of Palestinians from land claimed by Jewish settlers.

That’s all. There was not a word about the recent trend of unprovoked attacks by Palestinians on Jewish Israelis; or the non-stop incitement by Palestinian politicians, religious leaders, and media; or that the frequency of Palestinian terrorism almost always increases during Ramadan.

Another seemingly inconvenient fact ignored by the media is that Palestinian rioters brought large rocks to the Temple Mount and stashed them inside Al-Aqsa mosque. Videos of the clashes also show Palestinians using fireworks as weapons, forcing Israeli border police to use shields to protect themselves. It also seems that lasers were used to distract and disorient the officers.

This video footage provided by the Israeli police is invaluable, as it helps viewers properly understand what is captured in the lead image used by The Washington Post.

The Post’s caption of the photo reads, “Palestinians react as Israeli police fire stun grenades during clashes at the compound that houses the al-Aqsa mosque in Jerusalem’s Old City.”

However, the picture very clearly shows fireworks exploding in mid-air, most likely those used by Palestinians — with a view to harming Israeli security forces — that prompted a response.

And whereas stun grenades were at times indeed used by security forces as a dispersal method, this is what they actually look like when they explode.

It seems clear, then, that the Post‘s caption is inaccurate. 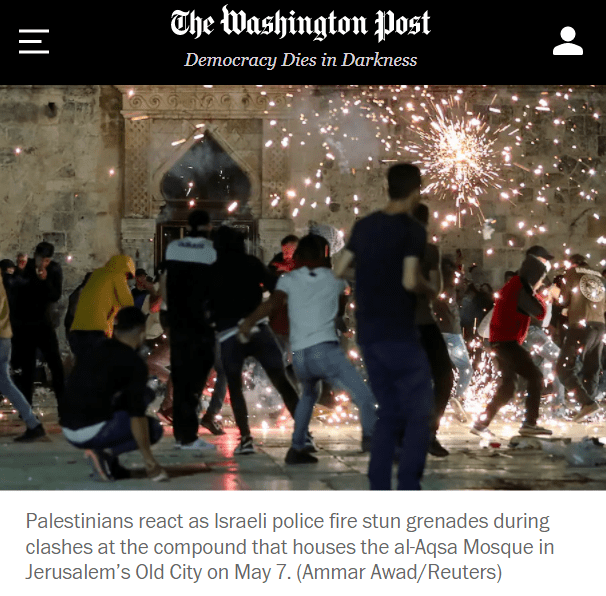 For perhaps the first time ever, hundreds of Hamas flags were flown this weekend on the Temple Mount. The terrorist organization that rules the Gaza Strip is dedicated to Israel’s destruction, and is evidently making inroads in Jerusalem.

I can’t recall seeing this many Hamas flags on the grounds of al-Aqsa. pic.twitter.com/aFi4nyRLal

The flags should speak for themselves, given that they represent a genocidal group. But there is another angle to this occurrence.

As was widely expected, Palestinian Authority President Mahmoud Abbas recently canceled legislative elections originally scheduled for May 22. Since then, tensions have been rising between Abbas’ Fatah faction, which essentially governs the West Bank by fiat, and Hamas. In response, Hamas has increased its incitement against the Jewish state, in what many analysts construe as an attempt to raise its public profile by demonstrating its nationalistic bona fides.

Unfortunately, news readers are routinely deprived of detailed, nuanced coverage of the decade-and-a-half-long intra-Palestinian conflict. This has resulted in fundamental misconceptions about the relationship between Israel and the Palestinians, as well as between the Palestinians themselves. In this case, the result is clear: readers are left misinformed as to what truly accounts for the latest escalation of violence in Jerusalem.

Emanuel Miller is a writer-researcher for HonestReporting, a Jerusalem-based media watchdog with a focus on antisemitism and anti-Israel bias, where a version of this article was originally published.