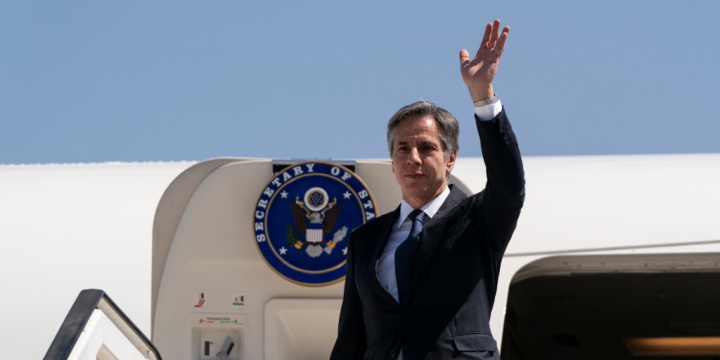 US Secretary of State Antony Blinken waves as he boards his plane upon departure from Tel Aviv Ben Gurion Airport, in Tel Aviv, Israel May 26, 2021. Alex Brandon/Pool via REUTERS

US Secretary of State Antony Blinken met top officials in Cairo on Wednesday during a Middle East tour aimed at shoring up a ceasefire that ended the worst fighting in years between Israel and Palestinian militants.

Egypt has longstanding relations with both sides in the conflict and played a key role in brokering the ceasefire after 11 days of violence, in coordination with the United States.

In a brief visit, Blinken met Egyptian President Abdel Fattah al-Sisi, Foreign Minister Sameh Shoukry and general intelligence head Abbas Kamel at the presidential palace in Cairo. He made no comments to media ahead of the meeting.

Blinken arrived in Egypt after stops in Jerusalem and Ramallah and is also due to visit Jordan. On Tuesday, he pledged that the United States would provide new aid to help rebuild the Gaza Strip, including $5.5 million in immediate disaster relief and nearly $33 million for the U.N. Palestinian aid agency based there.

He also said the United States intended to ensure that Hamas, which controls Gaza and is listed by Washington as a terrorist organisation, did not benefit from the humanitarian aid.

Yehya Al-Sinwar, the Hamas chief in Gaza, said on Wednesday that the group welcomed Arab and international efforts to rebuild the enclave.

“We have satisfactory sources of money for Hamas and Qassam. A major part of it from Iran and part in donations from Arab, Muslims and liberals of the world who are sympathetic to our people and their rights,” he added.

Egypt, which shares a border with Gaza and has security contacts with Hamas, is likely to have a role in channeling aid, a senior US State Department official said ahead of Blinken’s regional tour.

During the fighting, Egypt opened the Rafah border crossing between Gaza and its Sinai Peninsula in order to provide medical aid and evacuate wounded people.

It also deployed a security delegation that shuttled between Israel and Gaza to reinforce the ceasefire after it came into effect early on Friday.