On Saturday, Vice released yet another one-sided anti-Israel documentary. The propaganda piece includes a shockingly uncritical interview in which Hamas’ claims that it “doesn’t want fighting” and has tried “peaceful resistance” are left unchallenged.

Hamas is a US-designated terrorist group that is committed to Israel’s destruction, and initiated last month’s war.

It’s not the first time that Vice’s bias has been evident, with HonestReporting having critiqued the outlet numerous times over the past months (see here, here, and here).

Yet while Vice UK editor Zing Tsjeng on March 17 promised to address our repeated concerns, we never received an answer.

This prompted us to delve deeper into the possible reasons why Vice continues to produce slanted media coverage about Israel.

HonestReporting analyzed Twitter accounts of Vice journalists, freelancers, and editorial staff who reported on the recent conflict between the Jewish state and Gaza-based terror groups.

What we uncovered was shocking. 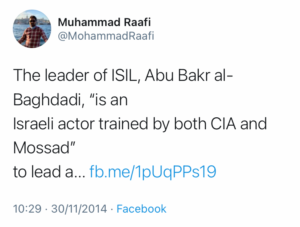 Mohammad Raafi recently made his first appearance on Vice with the piece, “This Graffiti Artist Was Arrested For His Viral ‘We Are Palestine’ Mural,” drawing a false parallel between the Palestinian territories and Indian-controlled Kashmir.

Over the last few months, the Kashmir-based journalist also contributed to Al Jazeera and The Financial Times. These outlets seemingly turned a blind eye to Raafi’s long history of public anti-Israel remarks, most of which can be qualified as bluntly antisemitic.

For example, in November 2014, Raafi alleged that ISIS leader Abu Bakr al-Baghdadi was an “Israeli actor trained by both CIA and Mossad,” an antisemitic conspiracy theory that is widespread in the Muslim world. That same year, Raafi wrote “Are these Jews human? I doubt.”

The posts link to his now-deleted Facebook profile. In addition, during the 2014 Gaza war, Vice’s new contributor tweeted out false charges of a “massacre” by Israeli forces in the Gaza Strip. 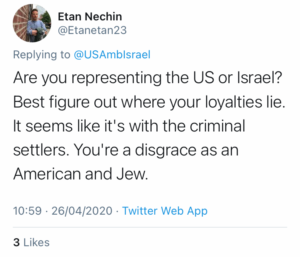 Among others, Etan Nechin’s articles for Vice amplify the thoroughly debunked libel that Israel is somehow preventing Palestinians from accessing COVID-19 inoculations.

But this is hardly surprising. On Twitter, the Haifa-born journalist who relocated to New York some 10 years ago constantly defames the Jewish state. HonestReporting uncovered dozens of anti-Israel tweets, as well as antisemitic slander directed at Jews who disagree with him.

For example, last year, Nechin made a vile dual loyalty accusation against the US ambassador to Israel. According to the IHRA working definition of antisemitism, this can constitute Jew-hatred. Nechin, however, blames antisemitism on “Israeli policies.”

He has also said that Zionism was founded on the “legal supremacy of Jews,” and repeatedly called for Israel’s Law of Return to be repealed. This foundational law guarantees a safe haven for Jews fleeing persecution (a concept mocked by Nechin). At the same time, he campaigned for a “Right of Return” to Israel for so-called Palestinian refugees. This demand, not supported by international law, would effectively end Jewish self-determination.

To top it off, the Vice journalist last month wrote that Jews have “no business” being in eastern Jerusalem, the part of Israel’s capital where Judaism’s holiest site — the Temple Mount — is located. 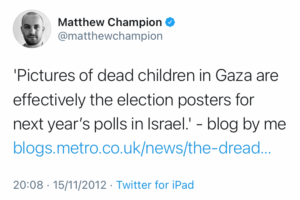 Matthew Champion serves as the executive editor of Vice World News, working from the company’s London office. During the Gaza violence last month, he published three articles on the conflict.

Champion’s reporting blatantly misrepresented the facts and omitted important context. In one of his pieces, for example, he asserted that Israel first launched airstrikes on the Gaza Strip, followed by “Palestinian militants” shooting rockets in retaliation.

But it is an undisputed fact that it was Hamas who first launched rockets at Jerusalem on May 10.

And Champion’s skewed reporting on the Arab-Israeli conflict dates back to before his employment with Vice. While working for the British news outlet The Independent in 2015, he tweeted that Israel killed “up to 17 journalists” in 2014, a claim promoted by Fatah and Hamas. However, independent research had already proved that eight out of 17 were operatives from the Hamas and Palestinian Islamic Jihad terrorist organizations. As far as we know, Vice’s executive editor never amended his tweet.

Three years earlier, Champion wrote a blog post that postulated that “Pictures of dead children in Gaza are effectively the election posters for next year’s polls in Israel.” This despicable claim has no basis in reality. In fact, the IDF goes to great lengths to avoid harming civilians, often going beyond its obligations under international law. Hamas, however, aims to kill Israeli civilians as its primary goal. 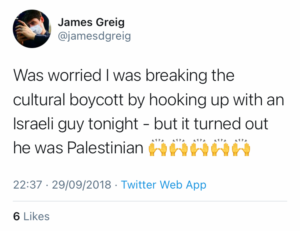 “Young Palestinians Are Leaning Into TikTok – Even if Their Content Gets Deleted,” written by Vice UK journalist James Greig, was ostensibly meant to highlight how Palestinians have taken to the TikTok video-sharing platform to promote their collective national identity.

However, instead of empowering these individuals, the piece perpetuated misleading claims about the Israeli-Palestinian conflict and downplayed the fact that terrorist groups are using social media to incite violence.

In March, HonestReporting revealed that the author of the pro-Palestinian Vice piece is an ardent supporter of the controversial Boycott, Divestment, and Sanctions (BDS) campaign against the Jewish state.

In one tweet, Greig promoted the BDS campaign against ice cream brand Ben & Jerry’s. In 2018, he went as far as to say that he does not want to date Israelis out of fear of “breaking the cultural boycott,” a statement that many would consider discriminatory had it been made about prospective dating partners from any other country.

During the protests that erupted in the United States after George Floyd’s death last year, Greig on Twitter implicitly promoted the canard that Israel is somehow responsible for American police violence. Such a libel resembles classic antisemitic tropes that blame Jews for all manner of problems. Moreover, the journalist has openly declared his solidarity with the Palestinian people in their “struggle for freedom and justice,” and called on his followers to donate to different Palestinian causes. 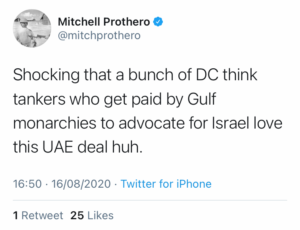 Athens-based journalist Mitchell (Mitch) Prothero joined Vice as the publication’s crime and security reporter not long ago. Before joining Vice, Prothero promulgated uncorroborated, sensationalist rumors about the conflict between Iran and Israel while working at Business Insider. He also has a history of making anti-Israel remarks on Twitter.

As HonestReporting pointed out three months ago, Prothero compared Israel to countries like Iran and Saudi Arabia. He has also tweeted that “DC think tankers” get paid by “Gulf monarchies” to advocate for Israel.

When individuals such as these are expected to report accurately and truthfully on Israel, journalistic objectivity becomes no more than a hollow phrase.

Is this what Vice means by “immersive world-class reporting by a new generation of global correspondents?”

The author is a contributor to HonestReporting, a Jerusalem-based media watchdog with a focus on antisemitism and anti-Israel bias — where a version of this article was first published.