A truck parks next to a security barrier inside the Kerem Shalom border crossing terminal between Israel and Gaza Strip January 16, 2018. Photo: REUTERS/Amir Cohen/File Photo.

Recently, Palestinian artist Taqi al-Din Sabateen painted a picture on the Israeli separation barrier, showing an Israeli soldier who removes his helmet to reveal a KKK mask, as he glares at a Palestinian child hiding a goldfish bowl. 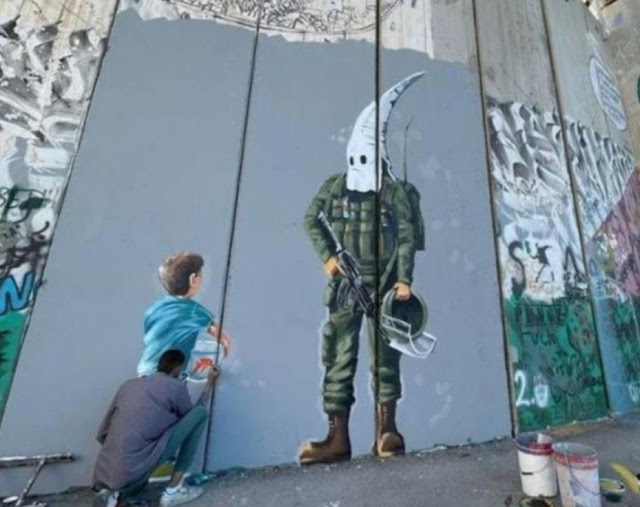 Demonizing Israeli Jews as racists has been fashionable ever since Israel was created, and it is not considered outrageous anymore. But it should be.

The cumulative effect of this slur — along with the “genocide” and “apartheid” lies and all the rest — is that people believe it and eventually it becomes something that you can’t even argue against, because it’s accepted as historic fact.

And for Israel’s enemies, this is entirely the point.

To the immediate left of this mural is another one — of PFLP terrorist and airplane hijacker Leila Khaled. 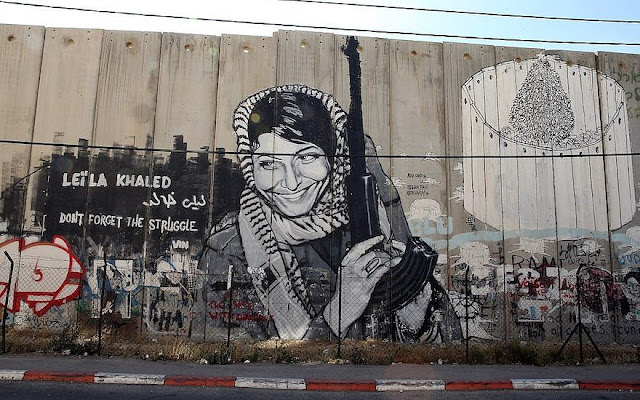 At the very same time that the audience is being told that Israeli Jews are like the KKK, we see that killing Israeli Jews is a heroic act. Terror against Jews is not only allowed, but mandatory, because they are evil racists who think they are “chosen” and better than Arabs and non-Jews — which is a mainstream Palestinian view.

And Westerners are not allowed to criticize this, because the Palestinian experience makes their opinions tantamount to facts; if they are antisemites, they are justified in being antisemites.