On August 28, United States Congresswoman Rashida Tlaib (D-MI) ignited a firestorm after posting a claim on Twitter that Israel was dehumanizing Palestinians by not returning the body of an assailant who in June had attempted to ram a car into IDF soldiers before exiting the vehicle while wielding a knife. She was subsequently shot dead.

Nevertheless, Tlaib wrote the following on the social media platform:

Meet Mai Afana’s mother, Khuloud, who is fighting to be able to bury her daughter & begin her healing. Mai was a mother, loving daughter & successful PhD student. She was killed by the Israeli government last June. Israel won’t release her body to her family. pic.twitter.com/kHehtA0yeW

First, there is the obvious fact that Tlaib failed to even note that Afana had committed an act of terrorism.

Second, Afana was not killed by “the Israeli government,” but rather by security forces who were intentionally targeted.

Third, Tlaib alludes to an Israeli policy whose underpinnings she is clearly unfamiliar with.

While Rashida Tlaib in particular, and more broadly the international media, have seemingly turned a blind eye to the ramifications of Israel returning the bodies of dead Palestinian terrorists, the country’s High Court of Justice has addressed the matter.

In 2019, the court ruled that the military has the legal right to keep the bodies of slain terrorists. The justices determined that doing so is a matter of national security, and that the practice was not illegal under international law governing armed conflict.

The ruling was effectively a judicial seal of approval for a 2018 parliamentary law that allowed district police commanders to determine whether to release terrorists’ bodies for burial. The law made clear that praise has repeatedly been lavished on dead terrorists at their funerals, which, in turn, has served to incite additional attacks.

Indeed, what Tlaib overlooks — and the media continually downplays — is the culture of “martyrdom” that pervades Palestinian society.

Tlaib’s August 28 tweet was the latest in a series of posts vilifying the Jewish state for defending its citizens.

I still remember the Erekat family’s plea last year to release their loving son, Ahmed’s body. Here is his story. @hrw and other human rights organizations have demanded an end to this disgusting practice, and the U.S. must join them in that demand.

Besides dismissing Israel’s response to serious national security concerns as a “disgusting practice,” Tlaib again engages in historical revisionism. Ahmad Erekat was caught on video committing an act of terrorism.

Security footage shows Erekat driving a car while approaching a checkpoint in Abu Dis, near Jerusalem. He suddenly accelerates while turning towards a group of Israeli security personnel. He then rams into a female officer, who is knocked into the air. After ignoring warnings issued after the initial incident, Erekat swiftly exited his vehicle, possibly in a bid to target more soldiers.

Incredibly, CNN then produced this headline: 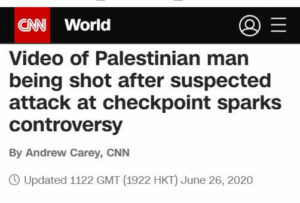 Erekat was not a member of any known terrorist group. So, partly in order to more effectively respond to the growing phenomenon of so-called lone wolf events, the Israeli security cabinet in late 2020 agreed to keep the bodies of all Palestinian attackers, regardless of whether or not they were affiliated with terrorist organizations.

Another reason for this was to apply pressure on Hamas to release Israelis Avera Mengistu and Hisham al-Sayed from captivity, as well as the bodies of soldiers Hadar Goldin and Oron Shaul.

As Defense Minister Benny Gantz said at the time: “Not returning the bodies of terrorists constitutes part of our commitment to maintain the security of Israel’s citizens, and of course to bring the boys home. I suggest to our enemy that they understand and internalize the message.”

The same news outlets that focus almost exclusively on the recurring tit-for-tat military exchanges between Israel and Palestinian terrorists give little consideration to the roots of the violence that the Jewish state must counter. In fact, the leadership in both the West Bank and Gaza Strip — the Palestinian Authority and Hamas, respectively — has brainwashed many children to believe that the loftiest goal in life is to become a martyr.

The media’s failure to adequately report on this undeniable reality has contributed to the emergence of a distorted zeitgeist, in which influential public figures such as Rashida Tlaib can advocate without fear of consequence on behalf of Palestinian terrorists, while slamming Israelis for defending themselves.

Gidon Ben-zvi is a writer-researcher for HonestReporting, a Jerusalem-based media watchdog with a focus on antisemitism and anti-Israel bias — where a version of this article first appeared.