Do the EU and the UN Know They Are Supporting Scholarships for the Children of Terrorists? While Palestinian Media Watch (PMW) welcomes European Union (EU) and United Nations (UN) funding for training courses for Palestinians, the problem arises when the courses offer full scholarships to the children of terrorist prisoners and dead terrorists, thereby rewarding the terrorists for their crimes.

In other words, children of terrorists and murderers — be they imprisoned, released, or dead (so-called “Martyrs”) — are rewarded and can study for free. 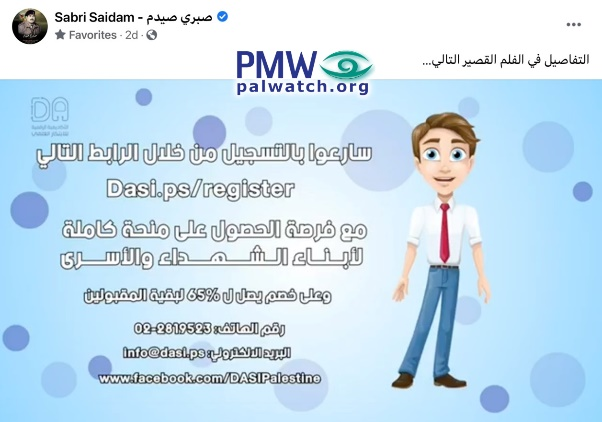 Text on image: “Hurry to register at the following link:

With a possibility to receive a full scholarship for the children of Martyrs and prisoners.

And a discount of up to 65% for the rest of the recipients.”

This means that Safa, the daughter of Abdullah Bargouhti, an imprisoned Palestinian terrorist convicted for the murder of 67 people in multiple terror attacks, and the children of Marwan Barghouti, convicted for his part in the murder of 5 people, are entitled to special privileges, simply because their fathers are mass murderers.

If you are the child of Marwan Al-Qawasmi and Amer Abu Aisheh, the two terrorists who kidnapped and murdered three Israeli teens in 2014, and were then killed during Israel’s attempted arrest — you too would get special privileges.

To put it succinctly, it pays to be the child of a terrorist murderer.

While it is common knowledge that the PA spends hundreds of millions of shekels/dollars/euros every year paying salaries, allowances, and providing special additional benefits to the terrorist prisoners and the families of the terrorists, it is less known that the EU and the UN participate in the provision of these benefits.

The course advertised by Abbas’ advisor is being run by the Palestinian NGO Al-Nayzak. The website of Al-Nayzak proudly shows that its donors include UNICEF (the UN agency responsible for providing humanitarian and developmental aid to children worldwide), UNRWA (the UN organization devoted solely to Palestinian refugees), UNOPS (the UN organization dedicated to implementing projects for the United Nations System, international financial institutions, governments, and other partners around the world), UNDP (the United Nations Development Programme, which promotes technical and investment cooperation to help people build a better life for themselves), the EU, and others. 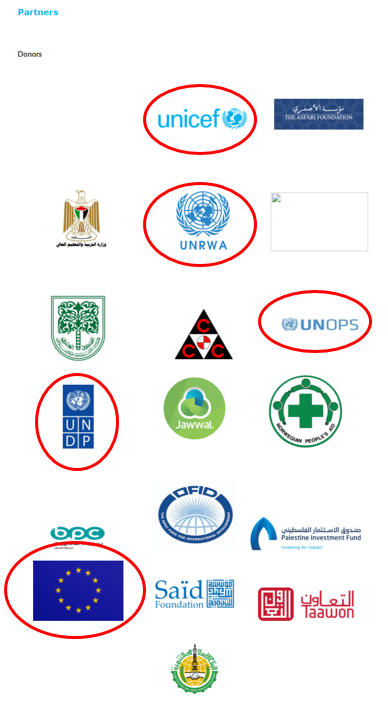 While self-identifying as a “Palestinian non-profit” that has centers in “Jerusalem, Ramallah, Gaza, Hebron and Nablus,” Al-Nayzak is actually registered in Israel with the Israel Registrar of NGOs.

This reality begs the question: Are the UN and the EU innocent and unknowing victims of the PA and this Palestinian NGO, or do they know that their money is being used to provide benefits to the children of terrorists, and thereby, albeit indirectly, helping to promote, incentivize, and reward Palestinian terror against Jews, Israel, and Israelis?

In 2017, PMW exposed that the Palestinian NGO “Women’s Affairs Technical Committee” (WTAC) had named a youth center for women after Dalal Mughrabi, the terrorist murderer who led the most lethal attack in Israel’s history, and that the building of the center was a joint initiative of the NGO, the PA, the UN, and the Norwegian government.

On the day of PMW’s release of the report, the Norwegian government demanded its money back and days later, the UN condemned the actions of the NGO.

Since UN funding has already been misused by Palestinian NGOs, one would assume that the UN has since implemented stringent funding restrictions to avoid UN funds again being abused by NGOs for the purpose of promoting or glorifying terror and terrorists.

Starting in financial year 2020, the EU added an elementary anti-terror ‎precondition to all of its external NGO funding. In order to be eligible for funding, ‎the grant beneficiaries are now required to ensure that EU funding does not ‎pass through them to EU-designated terror organizations.

Following the adoption of this provision, PMW reported that at least one Palestinian NGO, DCI-Palestine — an organization with documented ties to the Popular Front for the Liberation of Palestine (PFLP), an internationally designated terror organization — has since rejected the EU anti-terror funding precondition and waived the EU aid.

Before releasing this report, PMW wrote to the UN Secretary General, the office of the UN Special Coordinator for the Middle East Peace Process, UNICEF, UNRWA, UNOPS, UNDP, and the EU, and asked why they are supporting a Palestinian NGO that incites, promotes, and rewards terror. None of those contacted chose to respond.

Since they did not respond to our private correspondence, PMW is publicly calling on the relevant UN organizations and the EU to publicly denounce the use of their funds to provide special privileges to the children of terrorists.

While children are innocent and should not be punished for their parents’ terror, international bodies should not be sending a message to Palestinian society, that children of terrorists deserve preferential treatment above other children, specifically because their parents are or were terrorists. PMW further calls on the UN and the EU to immediately cease all donations to the Palestinian NGO Al-Nayzak.

Lt. Col. (res.) Maurice Hirsch, Adv. is the Head of Legal Strategies for Palestinian Media Watch (PMW).  A version of this article was originally published by PMW — along with a full transcript of Abbas’ speech.