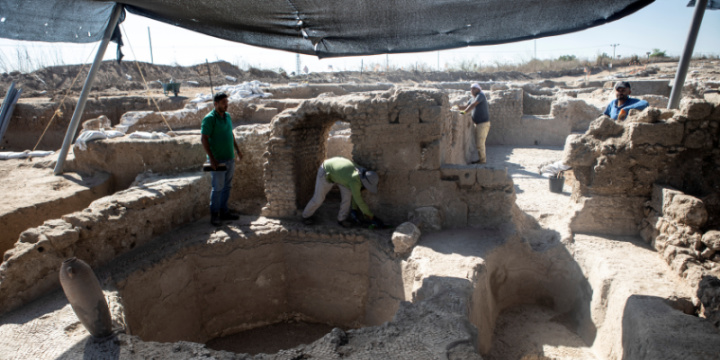 The Israeli and Jewish media recently reported on the discovery in Yavne of a 1,500-year-old complex capable of producing some two million liters of wine each year. The world’s largest known Byzantine-era winery was unearthed by archaeologists from the Israel Antiquities Authority.

The deep Jewish connection to ancient Yavne figured prominently in local coverage of the story. According to one outlet:

“In the Mishna [Jewish oral traditions] it is said that after the destruction of Jerusalem [in 70 CE], the Jewish leadership migrated to Yavne, and that the sages of Yavne lived in a vineyard and studied Torah. The excavation shows a continuum of existence of the wine industry at the site over many centuries,” the archaeologists said.

Indeed, after the destruction of Jerusalem at the hands of the Romans, Rabban Yochanan ben Zakkai moved the Sanhedrin, the supreme court and legislative body that ruled on all matters related to Halacha (Jewish law), to Yavne.

But while Israeli news organizations included this necessary context, three prominent wire services — the Associated Press (AP), Agence France-Presse (AFP), and Reuters — along with the BBC and The Times (UK), diluted or fully erased the link between the location of this historic discovery and the Jewish people’s connection to Israel.

The Associated Press piece, written by Tsafrir Abayov, does not include the words “Jew,” “Jewish,” or “Judaism.” And the terms “Israel” and “Israeli” are only mentioned in reference to the modern country where the winery was dug up.

The AFP item goes one step further, as it uses the contemporary, politically-loaded term “settlement” to describe an ancient Jewish community: “The facility in Yavne, south of Tel Aviv was a Jewish settlement during biblical times and a key city after the destruction of Jerusalem in AD 70.”

AFP’s reporting begs the question: key city to whom?

Then there’s the BBC. The outlet, viewed by over 400 million people every week, offers an interesting geography lesson: “The end product was known as Gaza and Ashkelon wine, after the ports through which it was exported to Europe, North Africa and Asia Minor.”

But Yavne, considered the most significant site in post-Biblical Jewish history after Jerusalem, is an afterthought. The BBC piece refers to Yavne only once, as being “south of Tel Aviv.”

The Times manages to outdo the BBC. The report filed by Anshel Pfeffer notes the Islamic connection to the area, but not the Jewish one: “…In the Byzantine east much of the wine came from this coastal strip before production ceased in the seventh century with the Muslim conquest.”

There was one pleasant surprise to this trend, however.

One of the AP’s 1,300 clients is The Washington Post (WaPo), which tasked one of its own writers to cover this story.

In a piece titled, “A 1,500-year-old wine factory was found in Israel. Experts say it’s the largest known winery from that era,” writer Jaclyn Peiser avoided the pratfalls noted above: “Yavne is known for being a haven to Jewish leaders about 2,000 years ago when the Romans destroyed Jerusalem. They formed a new place to study — in a vineyard, according to the archaeologists.”

Kudos to The Washington Post for being the exception in this case.

Indeed, omitting any reference to the Jewish people’s connection to Yavne accords with the apparent overriding policy at many news outlets to simply ignore “inconvenient” facts, whether historical or modern, that reaffirm the Jewish people’s ancient ties to Israel.