What could be more appropriate than a song about dying for Allah and “Palestine” to celebrate a wedding anniversary? What could be cuter than two young girls singing the song? And what could be more damaging than the Palestinian Authority (PA)’s constant brainwashing of Palestinian children and adults that “martyrdom” is good, prestigious, and what Allah desires?

On the occasion of the wedding anniversary of imprisoned terrorist Khaled Al-Baseti — who is serving 21-years for stabbing four Israelis — the PA TV program for and about Palestinian prisoners, “Giants of Endurance,” sent him greetings from his relatives.

Among the well-wishers were two young girls singing a song that advocates dying for “freedom” and for “Palestine”: 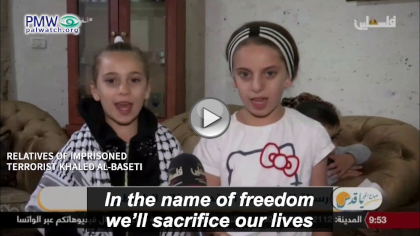 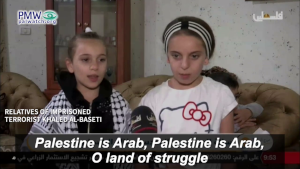 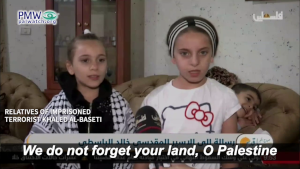 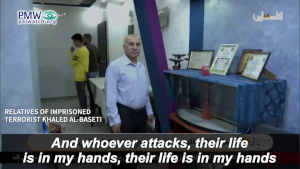 For decades, Palestinian Media Watch has documented the official PA policy to encourage children to become “martyrs,” and sacrifice themselves for Palestine.

One striking example of this PA child abuse is the following poem, recited by a young girl, in which a mother tells her son that he is “meant for Martyrdom,” and that “Our weapon is our Islam, and our ammunition is our children”:​ 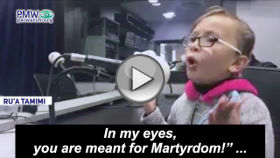 “His mother promised him a gift if he finished his food. The boy wondered in excitement: ‘Is it a toy?’ His mother approached him with a glowing look while carrying the gift. He looked, and it was a rifle!

He shouted loudly: ‘O Mommy! Mommy! What is this? Is this the gift?’ She picked him up, hugged him, and said: ‘My son, we were not created for happiness. In my eyes you are meant for Martyrdom!’

For the Jews killed his father, for no reason other than that he prayed for too long. The soldiers jumped at this and wondered: ‘Who knows who he is turning to? Is he turning to his God?’ They are cursed. Jerusalem is ours, our weapon is our Islam, and our ammunition is our children. And you, O my son, are meant for Martyrdom.

[The boy] returned to his bed and complained to his pillow, for he is too young for these things…

He gave in to his dreams. He sees his bride (i.e., Jerusalem), but she is handcuffed, and the Jews surround her, and she says to him: ‘O my knight, release me from the handcuffs. … I, Jerusalem, say this to you: What was taken by force will only be returned by force.’

[The boy] awoke from his sleep in order to live the remainder of his day, saying: ‘What was taken by force will only be returned by force’ while carrying in one hand the rifle, and in his other hand — a sad poem.”

Host 1: applauds and says to Tamimi: “My darling, my love, well done! Come here so I can kiss you. I can’t continue the conversation without kissing you…”

The author is a contributor to Palestinian Media Watch, where a version of this story first appeared.