Fatah Deputy Chairman: ‘We Are Proud of All’ Terrorist Murderers

While Palestinian Authority (PA) President and Fatah Chairman Mahmoud Abbas is keen to present himself as “moderate” and “peace-seeking” to the international community, the statements made by the person he appointed to be Fatah’s Deputy Chairman tell a different story.

Fatah’s no. 2, Mahmoud Al-Aloul, glorifies terrorists and murderers of Israelis, and promotes them as unequalled in “value.”

Al-Aloul praised all imprisoned Palestinian terrorists as “a large group of beloved people,” noting that Palestinians are “proud of them all.”

He made this statement while sitting next to the PA’s “terror mom” — Um Nasser Abu Hmeid — a Palestinian woman who’s been honored repeatedly by the PA for being the mother of five terrorist prisoners who are responsible for at least 10 murders and are all serving life sentences.

Accordingly, Al-Aloul praised her as “a giant of endurance”: 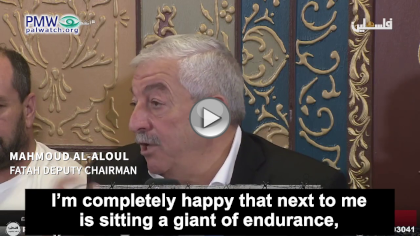 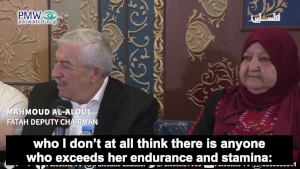 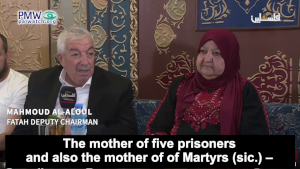 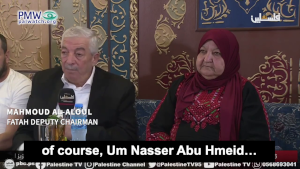 Later, Al-Aloul praised one of Um Hmeid’s imprisoned sons responsible for the murder of seven Israelis as “a national figure of stature,” stressing the unsurpassed “value” of the imprisoned terrorists.

Palestinian Media Watch has exposed that the mother of the five terrorists is continuously honored by the PA as a role model for Palestinian society. PA Chairman Abbas has met with her and the PA has honored her several times. PA Prime Minister Muhammad Shtayyeh and PA Minister of Women’s Affairs Amal Hamad have also paraded Um Hmeid as an icon for women.

As usual, Palestinian leaders are telling us what they really believe. But most people don’t want to listen.

Nan Jacques Zilberdik is a contributor to Palestinian Media Watch, where a version of this article first appeared.