An examination conducted by Palestinian Media Watch (PMW) of the monthly budget performance reports published by the PA for the last decade, shows that instead of the PA purchasing properties in the name of the PA, tens of millions of shekels/dollars/euros of PA funds have been diverted to the PLO, and then used to buy properties in the name of the PLO.

At the opening ceremony of the new PA embassy in Tunisia, General Supervisor of the Official PA Media and Fatah-run Awdah TV — Ahmad Assaf — said that in the last few years, upon the instructions of Abbas, the “State of Palestine” has established over 100 embassies around the world and that those embassies and associated residences were specifically purchased for the purpose: 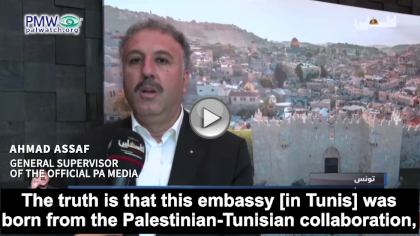 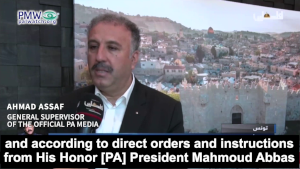 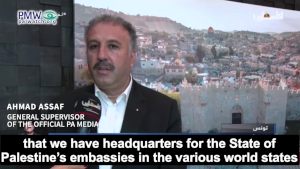 Even though Assaf claims that the properties purchased are “owned by the Palestinian people … under the ownership of the State of Palestine,” this does not seem to be the case.

While the purchase of “more than 100 embassies,” homes for ambassadors, and residences for employees would ostensibly have been a substantial development expense, the reported “development expenditure,” of the PA Ministry of Foreign Affairs and Embassies for the same 10-year period totaled only 25,109,000 shekels ($8,085,971 / €6,978,898).

In fact, according to the PA reports, the last time the PA “Embassies” reported any capital development was in 2011. That reported figure — 13,662,000 shekels — accounts for more than 54% of the reported development expenditure of both the Ministry of Foreign Affairs and the Embassies for the entire decade.

According to its website, the “Mission of the State of Palestine” in Ireland is located in Dublin at 8 Leeson Street Upper. An extract from the Irish land registry shows that the property that houses the embassy was purchased in 2016 for €1,200,000.

While the registry does not show who owns the property, news reports at the time confirm that that the property was purchased by “The Palestinian Mission to Ireland.” 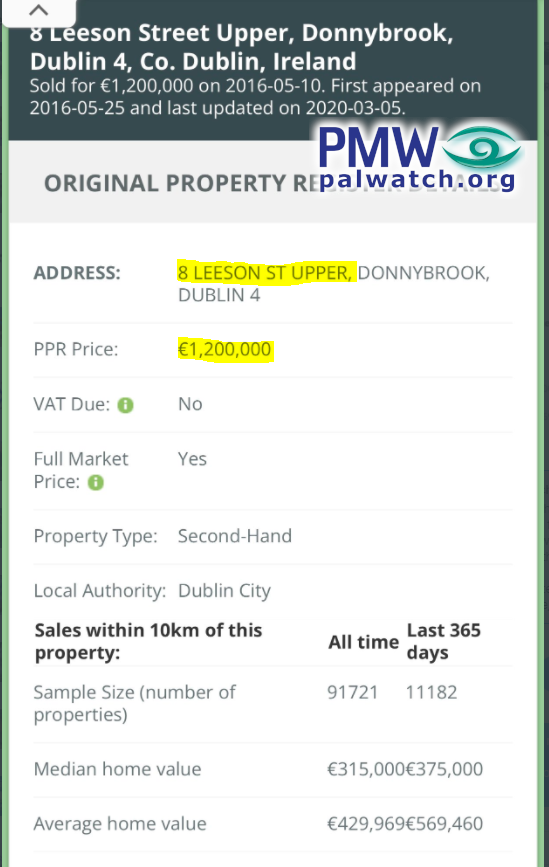 On the date of purchase, €1,200,000 was the equivalent of 5,160,000 shekels. Despite this price tag, the reported combined development expenditure of both the PA Ministry of Foreign Affairs and Embassies in 2016 was only 110,000 shekels. Since the purchase price was far in excess of the development expenditure, it is clear that the premises of the PA mission in Ireland were not purchased with funds from any of these sources.

Accordingly, it would seem clear that the purchase of over 100 embassies and residences likewise was not conducted with funds from either of these sources.

So where did the money come from?

While PMW has already proved that much of the money transferred by the PA to the PLO was used to fund the PA’s monthly salary payments to terrorist prisoners and released terrorists, the PA’s financial reports also show that during the relevant 10-year period, the “PLO institutions” spent 158,876,000 shekels ($50,873,874 / €44,392,704) on “development expenditure.”

In other words, while the PA has been begging and receiving hundreds of millions of dollars/euros from donor countries to run the PA, in fact, it would seem that large amounts have gone to the PLO to fund the purchase of the embassies. While the properties are meant to be the under the ownership of the PA, in fact, it would appear that the properties are actually owned by the PLO.

Indeed, the UK land registry shows, for example, that on April 28, 2011, the building that hosts the PA mission in the UK was purchased with ownership registered in the name of the PLO.

It is further interesting to note that since the PLO now owns many of the properties that house the PA embassies and missions, one should have seen a commensurate reduction in the “use of goods and services” of the embassies reflecting the reduction in rent payments.

Since the purchase of the properties was hidden, it would not have seemed unreasonable for the PA to continue, outwardly, justifying the high expenses of the embassies as including rent payments. In reality however, this could possibly mean that while it was the PA who gave the PLO the money to purchase the properties, the PA then continued to pay rent, this time, however, to the PLO.

In other words, it is possible that the PLO is not only benefiting from ownership rights of the PA-financed properties, but it might also be enjoying the fruits of the rents being paid by the PA to the PLO.

It should be stressed that the PLO is not synonymous with the PA.

Real estate owned by the PLO, is not owned by the Palestinian people, but rather by a separate entity dominated by the political party of Mahmoud Abbas — Fatah.

The PLO funds its member organizations, including those internationally designated as terror organizations. Income derived from properties owned by the PLO form part of the PLO budget.

In addition, it should also be noted that the entire PA endeavor to open “embassies” is a clear breach of the Israeli-Palestinian Interim Agreement on the West Bank and the Gaza Strip (a.k.a. the Oslo Accords).

Paragraph 5(a) of Article IX of the Oslo Accords specifically provides that the PA will not have any powers or responsibilities “in the sphere of foreign relations, which sphere includes the establishment abroad of embassies, consulates or other types of foreign missions….”

Nonetheless, the PA has brazenly breached, for many years, that and other cardinal provisions of the Oslo Accords.

While the international community thinks it is constantly donating money to the “Palestinian people” — in reality, the PA/PLO leadership is using vast parts of the aid for unclear and unsupervised goals.