Most Americans may not have heard of Aafia Siddiqui before Saturday, when a gunman entered Congregation Beth Israel in Colleyville, Texas, and took the rabbi and three congregants hostage. Thankfully, the standoff ended without any hostage being harmed.

But for many American Islamist and Muslim groups, Siddiqui is a martyr, “another victim of the US war of terror.”

In rallies and seminars throughout the past year, groups including the Council on American-Islamic Relations (CAIR), American Muslims for Palestine (AMP), and the Islamic Circle of North America (ICNA) Council for Social Justice demanded that Siddiqui be freed.

She was sentenced to 86 years in prison after her 2010 conviction for attempting to kill US personnel in Afghanistan who were preparing to interrogate her. She was able to grab an M4 rifle and, according to her indictment, open fire. Her shots missed, and she was wounded by return fire.

When she was arrested, she was carrying “documents that discussed the construction of weapons, referenced a ‘mass casualty attack,’ and listed a number of New York City landmarks,” the US Second Circuit Court of Appeals noted in rejecting her appeal. Some of those documents were in her handwriting and had her fingerprints on them.

“The strength of the government’s case was overwhelming,” the court found.

After she was shot, she struggled with her targets. A witness heard her say, “I am going to kill all you Americans. You are going to die by my blood.”

In addition, Siddiqui had a family connection to 9/11 mastermind Khalid Sheik Mohammed. She moved from the United States to Pakistan after the 9/11 attacks, telling a psychologist who interviewed her that “Americans were intending to abduct Muslim children and were converting them to Christianity.” In Pakistan, she married Mohammed’s nephew.

The court record and Siddiqui’s family connections have gone unmentioned during the recent events advocating for her cause. So, too, has the way that terrorist groups see her as a “superstar.”

“On several occasions, both the Taliban and Islamic State have asked for either the release or extradition of Dr. Siddiqui in exchange for US captives,” Joe Kasper, deputy chief of staff to then-US Rep. Duncan Hunter (R-CA) told The Los Angeles Times in 2014. Kasper, the story said, had access “to communications with the militant networks.”

ISIS, for example, made separate offers to free American hostages James Foley and Kayla Mueller in exchange for Siddiqui. The Taliban also reportedly offered prisoner swaps to free Siddiqui. Both hostages were murdered.

A third terrorist group, Jabhat al Nusra, trained an Ohio resident named Abdirahman Sheik Mohamud to plot a terrorist attack on the Texas penitentiary where Siddiqui is serving her sentence, George Washington University’s Program on Extremism noted in a 2018 report.

According to a prosecution sentencing memo, “Siddiqui’s conviction and imprisonment at a federal facility in Texas was a rallying point for Al-Qa’ida and other terrorist groups,” and Mohamud researched information about the prison. He planned “to execute ‘something big’ like travelling to Texas, where Dr. Siddiqui was being held, capturing three or four soldiers and killing them execution style.”

At an October 2021 rally held in New York, sponsored by more than a dozen groups, including the Aafia Foundation, CAIR, AMP, and the Muslim American Society, speakers claimed that her arrest and conviction were actually part of a war waged on Islam. 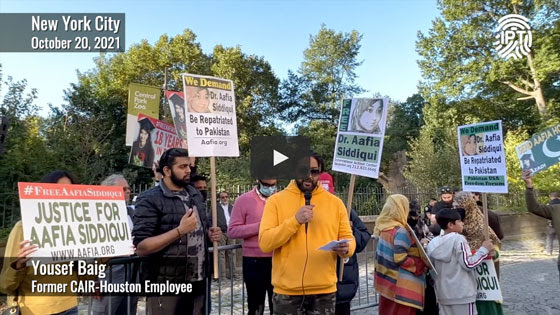 “Aafia is our Statue of Liberty. Aafia’s hijab is our crown,” said Yousef Baig, whose Facebook page indicates he used to work for CAIR’s Houston office. “She is our sister. So why are we here today? We’re here for Aafia. She carries our faith in heart, just like brother [Mauri] Saalakhan said … She carries our faith within her, and our faith has been assaulted when Aafia was assaulted. Our religion, our book, our faith was desecrated when she was tortured. And our prophet is disappointed because we have not done enough for her.”

The United States government denies Siddiqui was ever mistreated.

Muslim Americans need to stand up for Siddiqui, said former CAIR-Florida Executive Director Hassan Shibly, who also painted a picture of recently deceased American political and military leaders “answering for their deeds” in the afterlife. 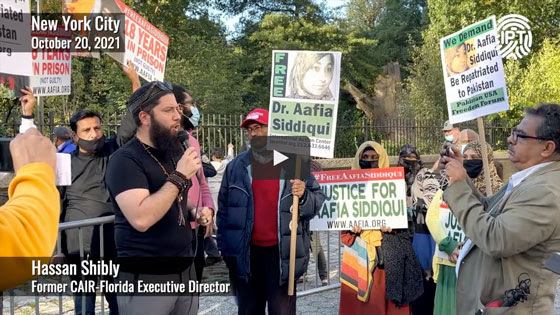 “Our sister Aafia Siddiqui’s imprisonment is a test for us more than it is a test for her. Allah is testing us,” Shibly said at the New York rally. “What are we doing to stand for our sister, for her family, for all those victims of the United States war of terror against the Muslim world. She is another victim of the US war of terror. And the perpetrators will be held accountable, if not in this life, in the next. Rumsfeld, Bush senior, Powell, they are all answering for their deeds at this very moment. And they must answer for each and every Iraqi, Afghani, Pakistani, every person of color, every person throughout the world whose blood has been shed.” 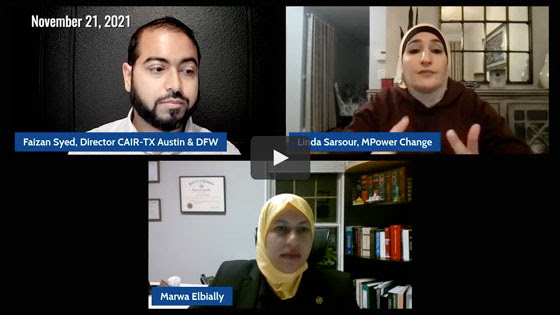 Siddiqui “embodies a political prisoner,” antisemitic activist Linda Sarsour said during a November webinar sponsored by CAIR-Texas. “And I see her in the same realm that I see Imam Jamil and Leonard Peltier, and many other former Black Panther party leaders and others who have been subjected to torture and subjected to solitary confinement and subjected to things that no human being should be subjected to in our incarceration system.”

Sarsour continued: “I believe like you said, you know, no one was killed. To have an 86-year sentence when no one’s life was taken is absolutely outrageous.”

CAIR was quick to condemn the Texas hostage incident and claim that it stands with the Jewish community. But that solidarity is opportunistic.

CAIR lauds Siddiqui, but overlooks her antisemitic statements, including demanding that no Jews be allowed to serve on her jury.

As HonestReporting noted, “CAIR has paid special attention to Siddiqui’s case, which the group’s Dallas-Fort Worth chapter even described as ‘one of the greatest examples of injustice in US history.’”

“A search of CAIR’s website for Siddiqui’s name brings up multiple results, such as a press release titled, ‘DC: Coalition to Hold News Conference to Call for the Release of Pakistani National Dr. Aafia Siddiqui from Texas Prison.’ It proceeds to claim that Siddiqui was wrongly convicted, while labeling her a ‘victim of the war on terror.’”

CAIR also double downed in defending its San Francisco chapter leader, Zahra Billoo, after she gave a speech in November urging an audience to “pay attention” to all facets of the American Jewish community. The “polite Zionists” are still the enemies, she said:

“They are not your friends. They will not be there for you when you need them. They will take your friendship and throw your Palestinian brothers and sisters under the bus.”