Last month, the Israeli police obeyed the law by carrying out the court-ordered eviction of the Salihiya family in Jerusalem’s Sheikh Jarrah/Shimon HaTzadik neighborhood. Israeli courts had previously ruled that their home, plant business, as well as two storage units, were built illegally on publicly-owned land that the Jerusalem municipality has earmarked for the construction of a school to serve children with special needs in the Arab community.

Sheikh Jarrah was previously thrust into the international spotlight when Israeli courts, following decades of legal proceedings over competing ownership claims, ordered the evictions of several Palestinian families. No Palestinian family had been removed from their residences in Sheikh Jarrah since 2017. According to a proposed compromise made by the court, the Palestinians living in the neighborhood would have been given “protected status” and not be evicted in exchange for paying a small rent fee to whom the courts ruled were the legal owners.

Some of the families apparently wanted to accept the offer, but were pressured not to do so by the Palestinian Authority (PA) and Hamas.

These are the documented, verifiable facts related to the ongoing Sheikh Jarrah story.

Nevertheless, media outlets have uncritically parroted the anti-Israel narrative that the Jewish state is somehow engaging in “ethnic cleansing.”

The four families from Sheikh Jarrah, a neighborhood in East Jerusalem that was annexed by Israel after the Arab-Israeli war in 1967, said in a statement that they were rejecting the deal. The agreement, proposed by Israel’s highest court, did not recognize them as the owners of their homes, they said, and it would obscure what they perceive as a wider Israeli strategy to displace Palestinians from East Jerusalem.

If they had accepted the deal, ‘our dispossession would still be imminent, and our homes would still be regarded as someone else’s,’ the families said. ‘Such “deals” distract from the crime at hand, ethnic cleansing perpetrated by a settler-colonial judiciary and its settlers.

For its part, The Washington Post published an op-ed, “Sheikh Jarrah Highlights the Violent Brazenness of Israel’s Colonialist Project,” that claimed:

Israeli settlers, supported as they are by the United States and a nearly silent global community, are incredibly brazen in their ethnic-cleansing campaign.

Palestinian leaders say the effort to evict families from their homes is nothing less than ‘ethnic cleansing’ aimed at ‘Judaizing the holy city [Jerusalem],’ the official Palestinian news agency Wafa reported.

To CNN’s credit, the article immediately noted that “Israel says the conflict is simply a ‘real-estate dispute.’ The Foreign Ministry accused the Palestinian Authority and militant groups of ‘presenting a real-estate dispute between private parties, as a nationalistic cause, in order to incite violence in Jerusalem.’”

An HonestReporting big data search found that between December 25, 2021, and January 25, 2022, the words “ethnic cleansing” and “Israel” appeared together 619 times in articles produced by 18 major publications — including The New York Times, The Washington Post, BBC, CNN, and The Guardian.

That is, on average, 21 mentions per day.

According to the United Nations, the modern use of the term “ethnic cleansing” was coined in the context of the 1990s conflict in the former Yugoslavia, and derives from the Serbo-Croatian expression “etničko čišćenje.”

A United Nations Commission of Experts tasked with investigating violations of international humanitarian law that were committed in what was then Yugoslavia, defined ethnic cleansing in its final report as:

Many believe that the acceptance by the United States and other United Nations Security Council members of the term ethnic cleansing as a description of the deadly conflicts in Bosnia and Rwanda allowed them to avoid referring to events there as “genocide” — which would have required intervention under international law.

Two international tribunals established by the UN and the International Criminal Court have debated over the exact legal definition for ethnic cleansing.

Taking into account the unclear definition, some scholars have cited the forced resettlement of millions of people by the Assyrians in the 9th and 7th centuries BC as being the first case of ethnic cleansing. The expulsion of Jews from Spain in the 15th century and the forced displacement of Native Americans in North America in the 18th and 19th centuries are also regarded by historians as subsequent examples of ethnic cleansing.

However, others argue that ethnic cleansing is a 20th-century phenomenon. In contrast to forced resettlement movements of the past, 20th-century ethnic cleansing efforts have been driven by the rise of modern technology, powerful nation-states, and nationalist movements fueled by a desire to “purify” the nation by expelling groups considered “alien.”

Ethnic cleansing remains rampant today. According to Freedom House, a US-government-funded organization that conducts research and advocacy on democracy, political freedom, and human rights, the number of countries that earned a score deduction in its index due to some manner of forced demographic change increased from three in 2005 to 11 in 2018.

Myanmar, Syria, South Sudan, and China were among these countries.

By contrast, this is how Freedom House described Israel:

…a multiparty democracy with strong and independent institutions that guarantee political rights and civil liberties…the judiciary is comparatively active in protecting minority rights…The Supreme Court has historically played a crucial role in protecting minority groups… The court hears direct petitions from both Israeli citizens and Palestinian residents of the West Bank and Gaza Strip, and the state generally adheres to court rulings.

This is in stark contrast to the charge leveled against the Middle East’s only democracy and spread uncritically by the media — that Israel is systematically working to drive out Palestinians, as well as Israeli Arabs, by force or through intimidation tactics.

The numbers tell the true story: 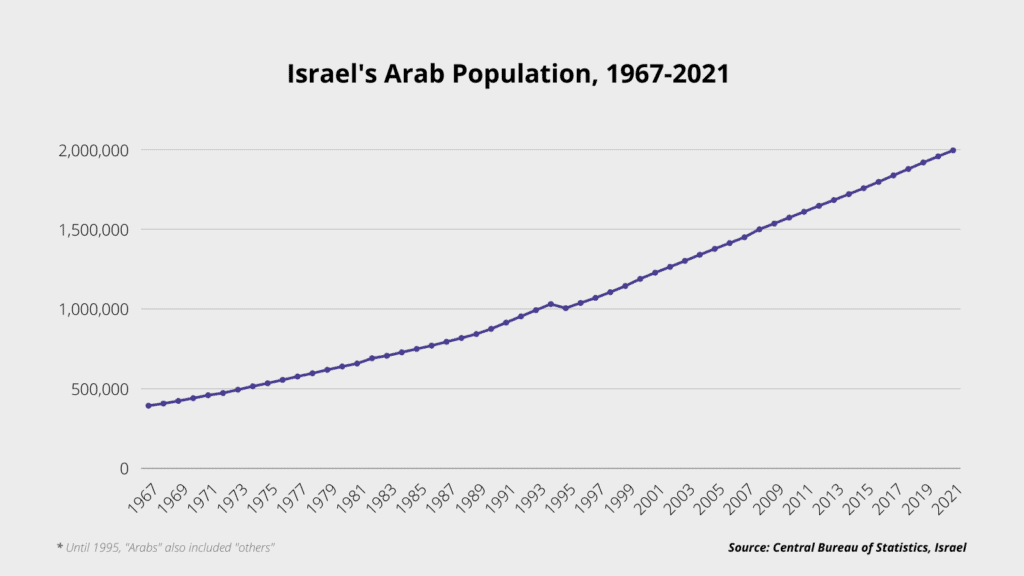 The growth rate in 2019 of the Arab population in Israel stood at 2.3 percent, while that of the Jewish population in the country was 1.8 percent.

As of 2021, the Jewish population in Israel was 6,998,000, whereas 1,995,000 Israelis identified as Arab. A report published by Israel’s Central Bureau of Statistics found that while the Jewish percentage of the country’s population was 82 percent at the time of its establishment in 1948, today it stands at 73.9 percent. During the same period, the Muslim population of Israel has increased nearly ten-fold. 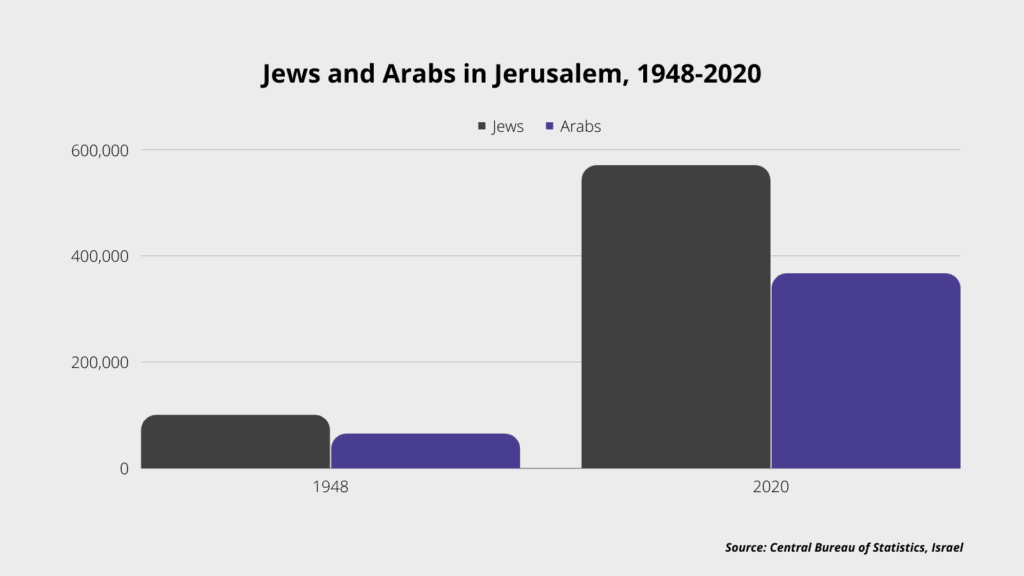 Israel assumed control of the West Bank and Gaza Strip in a defensive war in 1967. The two territories had been ruled by Jordan and Egypt, respectively.

With respect to Gaza, from 1967 to 2005, the population there increased from about 117,000 to over 457,000. In 2005, Israel withdrew every man, woman, child, and soldier from the enclave, uprooting over 9,000 Israelis across 25 locations. The purpose of this unilateral disengagement was to provide the Palestinians with the opportunity to create the conditions that eventually could lead to statehood.

Instead, Israel got Hamas, which, if it gets its way, has an actual plan to ethnically cleanse Jews from the territory between the Jordan River and the Mediterranean Sea.

Still, Gaza’s population is currently growing at about 3 percent per year, which is the 13th highest rate in the world. Today, there are approximately 2.1 million people living in the Palestinian coastal enclave.

Meanwhile, between the signing of the Oslo Accords in the mid-1990s, which led to the creation of the PAy that now governs some 95 percent of Arabs in the West Bank, and 2021, the total population in areas controlled by Ramallah has grown from approximately 1,900,000 to some 3,000,000.

Nevertheless, PA President Mahmoud Abbas has publicly vowed to remove all Jews currently living in the West Bank in the event a Palestinian state is formed. 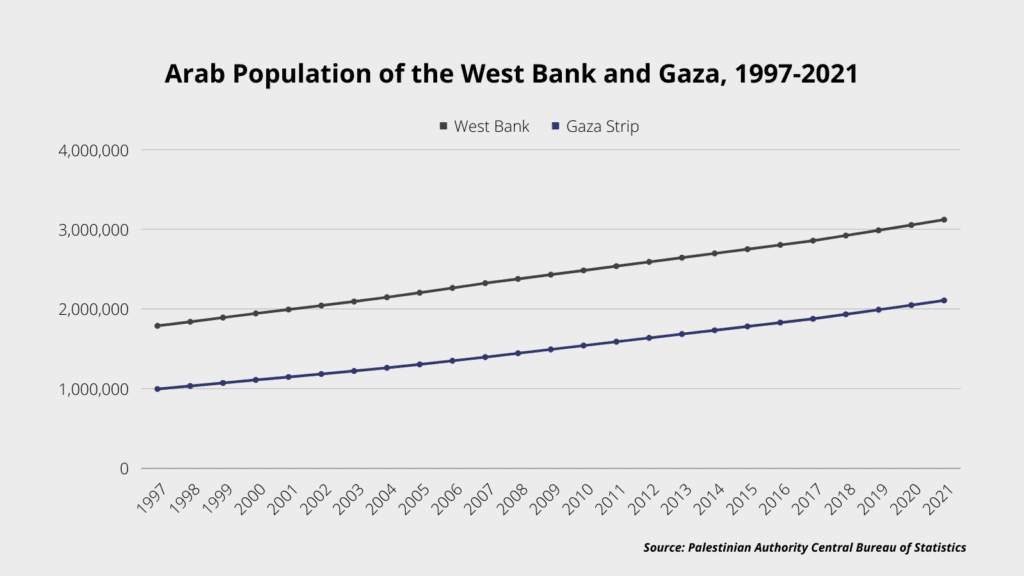 Then there are the policies and actions by the Israeli government that are encouraging and facilitating the integration of Arabs into broader society.

Arab mayors, parliamentarians, civil society organizations, and government officials of all backgrounds have worked on the proposal intensively over the past several months.

Mansour Abbas, who made history as the first Arab Israeli political party leader in half a century to sign a deal to sit in a coalition government, helped secure the funding for Israel’s Arab population.

The media often depicts Israel in a uniquely unfavorable light. Accordingly, what is unlikely to show up in their coverage is a 2021 survey conducted by the Palestinian Shfa news outlet that found that 93 percent of Palestinian Arabs in Jerusalem prefer to be governed by Israel and would not give up their Israeli identity cards if a Palestinian state was created.

By falsely suggesting that Israel is engaging in ethnic cleansing, news organizations are effectively minimizing the real plight of peoples throughout the world who are suffering at the hands of brutal regimes.