After Israel killed three terrorists who had already carried out a number of terror attacks and were planning another imminent attack, Palestinian Authority (PA) leader Mahmoud Abbas called on Palestinians to “dish out to them twice as much as we’ve received.”

In a speech broadcast during a memorial event for the three terrorists, Abbas rewrote history, whitewashing the terrorists and their actions, and claiming that the call for revenge was justified because,“We are the ones who were attacked. We didn’t attack anyone”: 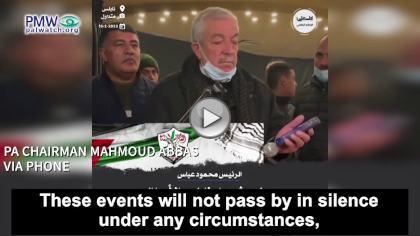 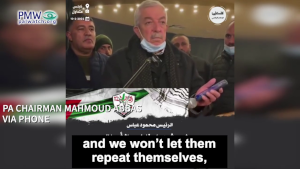 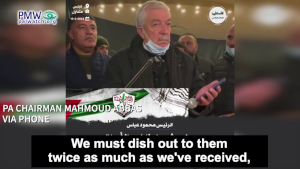 PA President Mahmoud Abbas via phone: “This is an act of premeditated murder that the oppressive Zionist occupier committed against our sons, our young people, and our people. These events will not pass by in silence under any circumstances, and we won’t let them repeat themselves, because these are crimes that we can’t be silent about under any circumstances. We’ve been very patient. We’ve been patient for 73 years [i.e., since Israel’s establishment]. We won’t continue to wait patiently any longer. We must dish out to them twice as much as we’ve received, because we are the ones who were attacked. We didn’t attack anyone, and we don’t call on people to carry out acts of murder and the like. They [i.e., Israelis] are the ones who do that.”

The three neutralized terrorists, Adham Mabrouka Al-Shishani, Muhammad Al-Dakhil, and Ashraf Mubaslat, were all members of the Al-Aqsa Martyrs’ Brigades, the internationally-designated terror wing of Fatah, headed by Abbas.

Official Fatah Spokesman Hussein Hamayel reiterated that the killing of the terrorists would “not pass in silence,” and called on his people to carry out popular resistance — a term used by Palestinians, which also refers to the use of violence and terror:

I tell you, for us in the Fatah Movement, this issue will not pass in silence, and I am exhorting and we are exhorting today [Feb. 8, 2022] on behalf of the entire Palestinian people on the need to carry out popular resistance against this occupation, because we are left with no other options but to defend ourselves from this crime…

These young people who ascended to Heaven today will be a curse for this occupation. …These three heroes are lofty in their graves, their pastures, their homes. Their souls are lofty. They will accompany us in liberating the land and the Muslims from this occupation…

Turning the terrorists into innocent victims, and turning Israel into the aggressor, simply for neutralizing terrorists, Hamayel added a warning for the US administration:

The American administration or the American Secretary of State spokesperson shouldn’t come to us and say: ‘We hope for restraint.’ Why this crime, this racism, and this filth, when you compare the victim to the criminal, to the gang leader, to the executioner?

When Abbas and Hamayel whitewash the terrorists and call for revenge and terror, they seem to conveniently forget that the terrorists had already carried out a number of terror attacks — and that it was Fatah, who, just a day earlier, had encouraged violence against Israelis, or as they refer to them “the settler herds”: 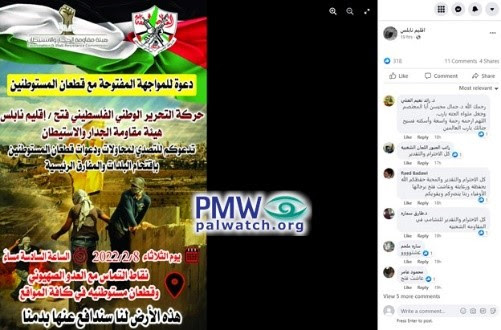 A call for open confrontation with the settler herds

At the points of friction with the Zionist enemy and its settler herds, in all areas

This land is ours; we will defend it with our blood

I think that [the terrorists] were not among the guys who are dangerous to the occupation forces, just because maybe they shot a bullet at an Israeli [military] post, but that doesn’t necessitate killing them in this way, in this way that is of course denounced by all levels of our people.