Husam “Sam” Asi has been BBC Arabic’s Hollywood correspondent since 2013. In recent years, he has also written for the Qatari–owned, Palestinian–operated, London-based daily newspaper Alquds Alarabi, where he often publishes text versions of his BBC Arabic video interviews alongside exclusive pieces.

Notably, the BBC’s editorial guidelines on Conflicts of Interest require all BBC employees to declare any other “writing commitments”:

A native of Israel who identifies as Palestinian, Husam Asi has made the Israeli-Palestinian conflict the focus of his Hollywood coverage for the BBC on several occasions.

In December 2018, he forced a denouncement of Israel’s Nation-State Law as “racist” from actress Natalie Portman, by claiming to her that the law “made you more superior than me because you are Jewish and I’m not.” He also used the term “Palestine” — contrary to fact and the terminology guide of BBC Academy  (at the time, the guide — dealing specifically with Israel and the Palestinians — was not restricted from public view).

The past year has seen Asi’s BBC Arabic reports about Israeli and Palestinian affairs — all from the perspective of entertainment and cinema — become significantly more frequent. Particularly excited by an alleged shift in the Hollywood and American Jewish mindsets “in Palestine’s favour,” he said the following in a May 2021 BBC Arabic video segment (0:26):

Until recently, any statement critical of Israel or supportive of the Palestinians would expose the stars of Hollywood to fierce condemnation from their fans and reprimands from the officials of Hollywood, sometimes ruining their careers. This is because Israel, since its establishment, has built solid ties with Hollywood and its officials, who were mostly Jewish.

Asi did not present any examples of film industry careers “ruined” at the hands of powerful Hollywood officials with “solid ties” to Israel. In fact, the only person historically supportive of the Palestinians whom Asi mentions by name – actress Vanessa Redgrave – was correctly reported to have received an Academy Award amidst an ongoing campaign against her due to her openly anti-Zionist activity. Redgrave even referred to “Zionist hoodlums” from the podium that year (1978), but Asi failed to provide evidence of concrete retribution that her professional life suffered as consequence. He just generally argued that it was “hampered.”

An interest in politics is also evident in the Hollywood correspondent’s Twitter account. Some of Asi’s posts are not entirely in line with the social media guidance that BBC employees are required to follow, just as his journalism does not always closely observe the BBC’s self-proclaimed principles of impartiality and accuracy.

Since the entertainment news website The Wrap raised allegations of sexual misconduct against Husam Asi on February 2, 2022, his breaches of BBC guidelines have become more frequent. On February 5, Asi endorsed the Amnesty International report on “Israeli apartheid.” In a tweet that was later removed, he decried “white countries that enslaved Africans, exterminated Jews and Native Americans and colonized most of the third world,” for rejecting the report. 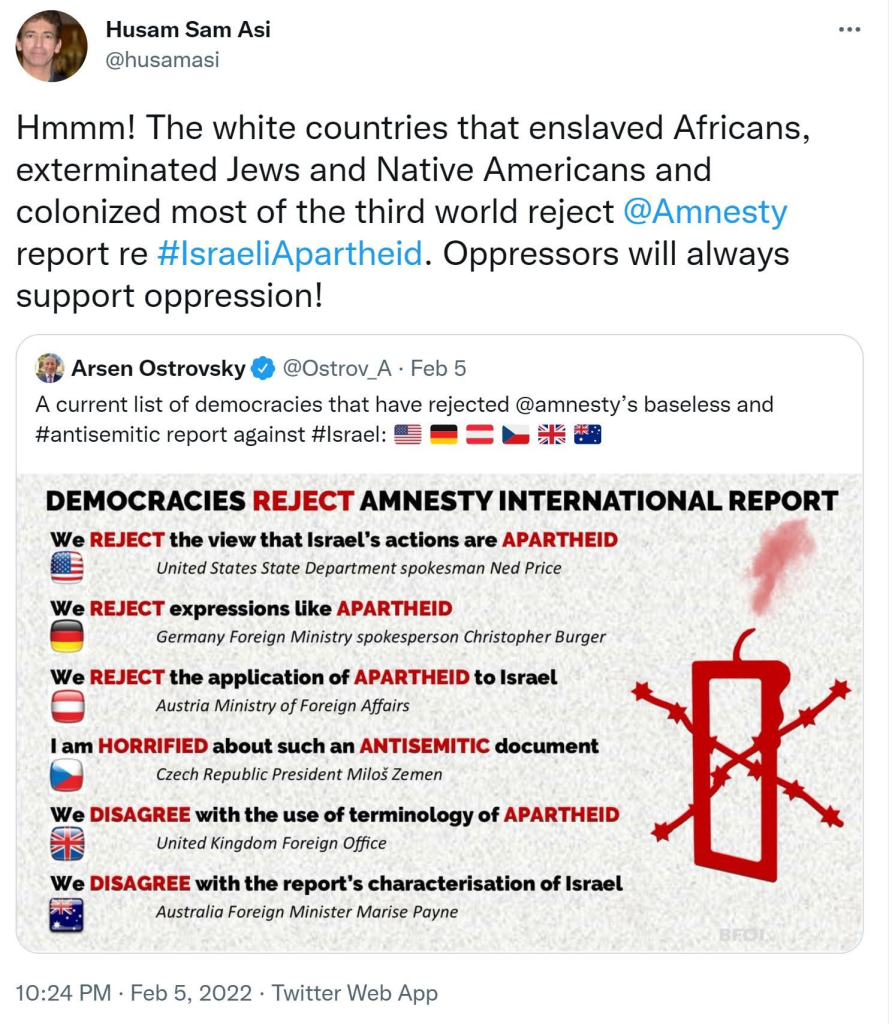 Asi responded to The Wrap’s article about him, in a February 7 Alquds Alarabi piece, entitled “Israel supporters resort to slander and defamation in order to silence the Palestinians in Hollywood.” His accompanying tweet claimed that The Wrap’s article was an attempt by “Zionist” editor Sharon Waxman “to ruin me in Hollywood.” That tweet, together with a Facebook post, was also deleted and was replaced with another tweet claiming that Waxman “hates Arabs and Palestinians.” 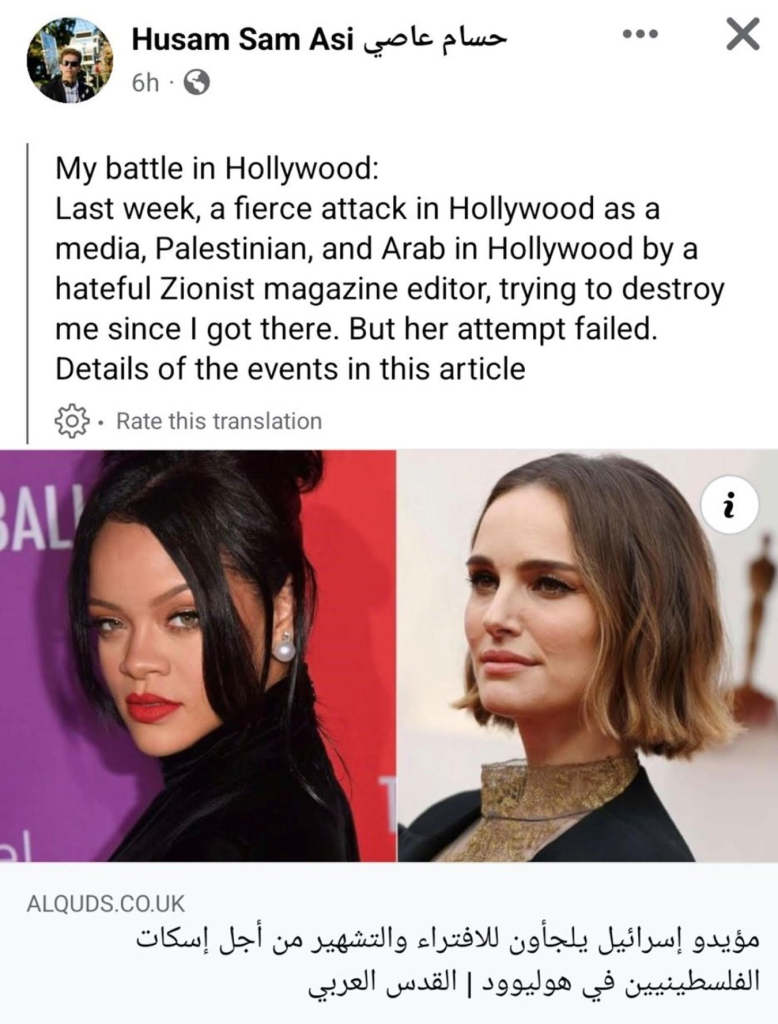 Asi’s Twitter exchange with Waxman included his views on Zionism, which he repeated later on his general Twitter feed: 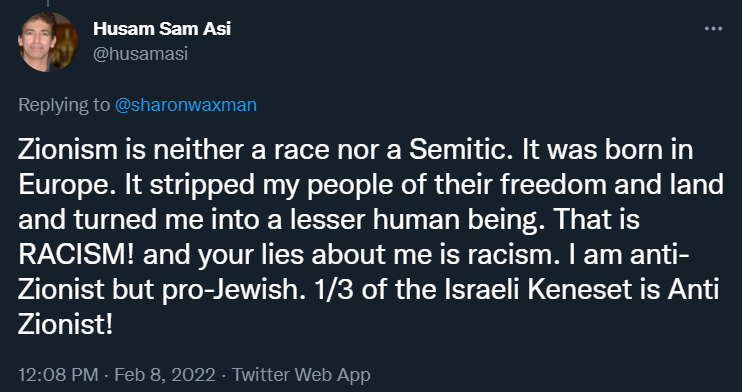 In response to his quote — “without the support of Jewish and Israeli friends, I wouldn’t survive longer than one year in Hollywood” — CAMERA UK raised the issue of that newspaper’s recurrent antisemitism: 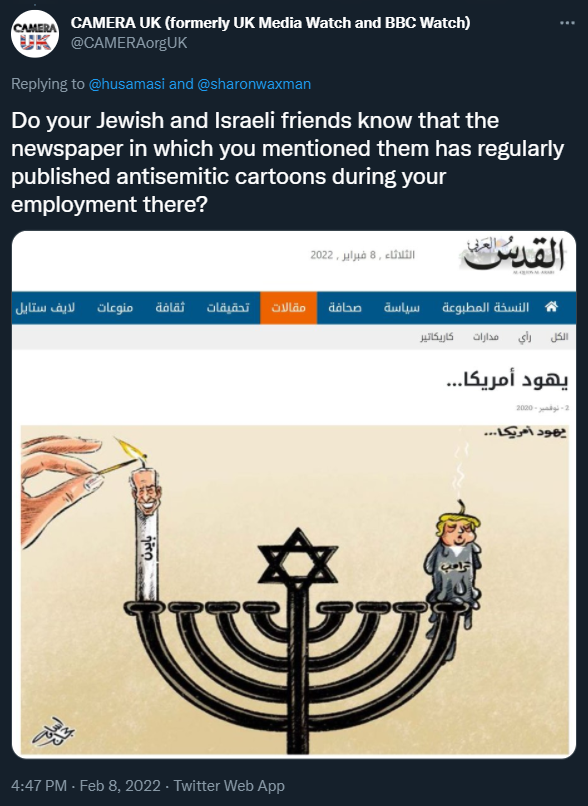 (The cartoon is entitled “The Jews of America”; the two candles are labelled “Biden” and “Trump”)

Asi’s response was as follows: 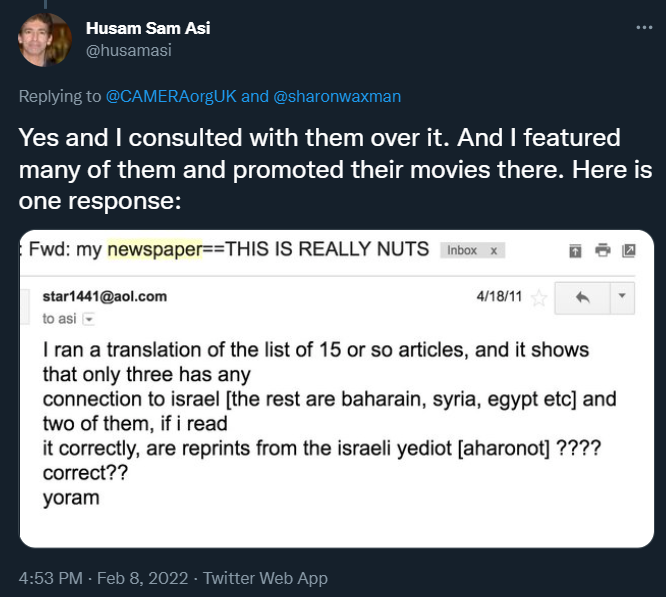 However, that claim completely contradicts the same Alquds Alarabi piece, published just a day before:

“As the date of my confirmation as a [Hollywood Foreign Press Association] permanent member was approaching, a voting member of the Association accused ‘al-Quds al-Arabi’ of antisemitism and called for the board of directors to expel me because I write there. An Israeli [HFPA] member intervened and conducted an investigation, concluding that ‘al-Quds al-Arabi’’s journalistic professionalism is no different than that of Israeli newspaper ‘Haaretz.’”

When CAMERA UK asked Asi “so, which is it?” he replied:

Whether or not Asi would write for “any outlet,” however antisemitic, was exactly what a past investigation set out to determine before confirming him as a permanent HFPA member, according to his own Alquds Alarabi piece from last Sunday. The Israeli member who conducted the investigation reportedly announced that the professional level of the Arab newspaper does not fall from that of Israeli Haaretz.

On Monday, however, Asi said the exact opposite: that in the past, he has actually consulted with his “Jewish and Israeli friends in Hollywood” over his workplace’s habit of publishing antisemitic cartoons. Apparently, he resolved to continue working there anyway because, despite the newspaper’s perspective on Jews, its editors do not bully or censor him personally.

In conclusion, Asi’s recent tweets breach BBC social media guidance, suggesting that editorial standards of impartiality and accuracy are compromised when the subject matter includes Israel; apparently, the BBC has not sufficiently weighed the effects on its reputation for impartiality of the fact that its Arabic service’s Hollywood correspondent also writes for a newspaper which publishes antisemitic content.

Hadar Sela is the co-editor of CAMERA UK — an affiliate of the Committee for Accuracy in Middle East Reporting and Analysis (CAMERA). A version of this post appeared there, and also at CAMERA Arabic.