The Twisted Palestinian Ideal: ‘Behind Every Martyr There’s a Mighty Mother!’ Motherhood in general is imbued with all kinds of expectations — both from the mother herself and her surroundings. She should be loving, kind, and understanding, and yet establish rules, set boundaries, and remain firm when needed. And that’s just the start.

But who is the ideal mother for the Palestinian Authority (PA), and what is expected of her?

A recent incident exemplified a twisted aspect of the ideal mother that the PA has encouraged and cultivated for decades.

When three young terrorists who had carried out several shooting attacks against Israelis — and were planning an imminent additional attack — were recently killed and “ascended to Heaven” as “Martyrs” in PA terminology, it was a welcome opportunity for the PA to remind Palestinians what an ideal Palestinian mother looks like.

Reporting from the funerals of the three terrorist “Martyrs,” the official PA daily explained what is “fitting for the mothers of the Martyrs.”

The following model behaviors were listed under the headline “Behind every Martyr there is a mighty mother!”:

Standing upright like [Mount] Gerizim and [Mount] Ebal, they confront death in a manner that amazed everyone, and despite the pain and the tears, gusts of joy burst forth, as if they were laughter rising from the rubble. With roses, with fragrant herbs, with sounds of joy — this is how the mothers accompanied their sons and sons of the Fatah Movement Adham [Mabrouka], Muhammad [Al-Dakhil], and Ashraf [Mubaslat] to Heaven…

As is fitting for the mothers of the Martyrs, the mother of Martyr Adham Mabrouka accompanied her son who is called Al-Shishani to the wedding [ a Martyr’s funeral is considered wedding to the 72 Virgins in Paradise in Islam]. She shed two rose tears and did not seclude herself in clothes of mourning. She marched at the front of the participants in the funeral and called out loudly: “With spirit, with blood, we will redeem you Martyr” …

“She made sounds of joy while making the sign of victory. With determination and resolution she raised his rifle and shot a bullet of joy and pride, while saying: “Today is the wedding day of my beloved, give me blessings and well-wishes.’”

She consoled everyone instead of them consoling her, and she did not cry at all but rather caused everyone to cry…

She drew attention with her composure, her firm willpower, and her control over her sorrow, while bidding farewell to the flesh of her flesh with sounds of joy…

Palestinian Media Watch (PMW) has exposed the PA’s cultivation of its Martyrdom culture, which asserts that Palestinian women are like no other, as they “view their children as insignificant compared to the homeland … they make sounds of joy for the Martyrs.”

PMW reports have also documented how the resulting parental “celebration” and shows of “joy” by bereaved parents whose children were killed — i.e., died as “Martyrs” — while carrying out terror attacks against Israelis, are also being promoted and underscored by the PA.

The long and detailed account above is how the official PA daily described two of the three mothers at their sons’ funerals — or as Palestinian Islamic belief has it, at their “weddings” to the 72 virgins in Paradise. With these descriptions the PA clearly indicates to the Palestinian public that this behavior is admirable, heroic, and “fitting.”

However, not all Palestinian mothers are able to live up to this twisted ideal. In an almost parenthetical note, the paper mentioned the third mother:

The situation was different for the mother of Martyr Ashraf Mubaslat. She had no strength to sound calls and make sounds of joy, and her tears and sighs touched the hearts of millions. This is the sorrow of a mother who lost her only son…

To remedy this less-than-ideal impression, the paper ended the funeral report by citing the three mothers allegedly stressing that “their sons are not more precious than the land of Palestine, and that they are now adorning themselves with pride and honor. Being called ‘mother of a Martyr’ was the greatest honor for them.” 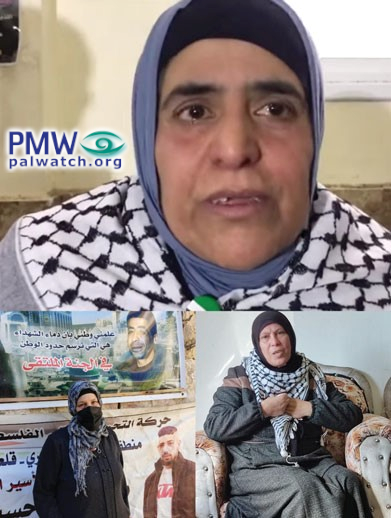 Above are pictures of the mothers of terrorists Adham Mabrouka Al-Shishani, Muhammad Al-Dakhil, and Ashraf Mubaslat.