No attempt is made to verify or refute the claim, which is basically anti-Israel, state propaganda. Even Iran later admitted that the two people killed were members of their Revolutionary Guard Corps — and not civilians.

Al Jazeera‘s reporting was slightly better than that of Reuters. After parroting the claims, it added:

The UK-based Syrian Observatory for Human Rights (SOHR), a monitoring group, said the missiles hit “a weapons and ammunition depot operated by Iran-backed militias near the Damascus International Airport”.
The group, which relies on an extensive network of sources inside Syria, said it could not confirm civilian deaths. [emphasis added]

Al Jazeera drops the topic there. But anyone who checks the website of the Syrian Observatory for Human Rights can find an update to the story:

Syria’s claim that Israel killed civilians has another angle, though. Syria has long claimed that Israel and ISIS cooperate, which would really surprise ISIS. But once in a while, they need to manufacture “proof.” So an Israeli attack on weapons warehouses outside Damascus gets transformed into an attack on a residential area, and somehow since it happened six or so hours after an ISIS attack, that’s all you need to know to prove collusion.

And how do we know that Syria is lying — and that Syria knows it is lying?

For one, here is Syria’s SANA news agency showing some of the damage. Does that look residential to you? 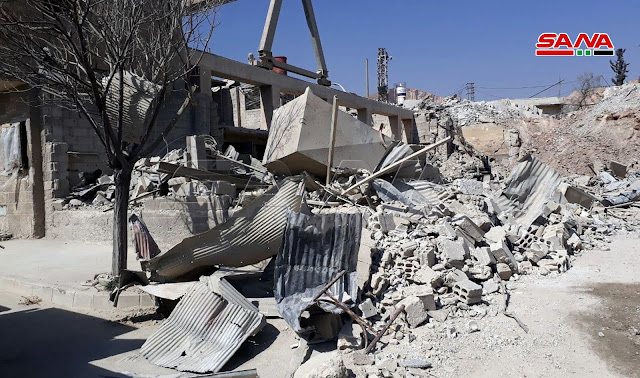 Secondly, they didn’t release the names of the “civilian victims.” If Israel killed civilians, their names and photos would be all over the news along with interviews with their grieving families.
The opinions presented by Algemeiner bloggers are solely theirs and do not represent those of The Algemeiner, its publishers or editors. If you would like to share your views with a blog post on The Algemeiner, please be in touch through our Contact page.