The PA reiterated that dying for “Palestine” — i.e.,  offering the “strong red blood… of its sons”–  is good, desired, and even expected of Palestinians.

Using one of its TV hosts as the messenger, the PA highlighted specifically the mothers of “Martyrs,” i.e. those who died while attacking Israelis. According to the PA, the mothers of such terrorists are special. In fact, these mothers are “the most beautiful” and “the most exalted”! 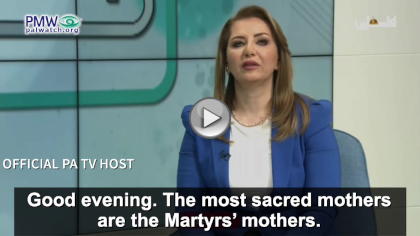 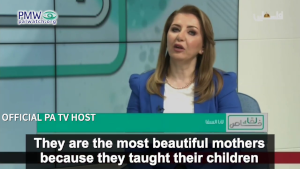 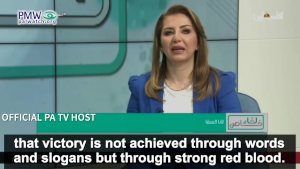 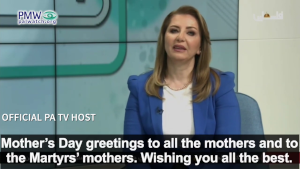 Official PA TV host: “Good evening. The most sacred mothers are the Martyrs’ mothers. They are the most beautiful mothers because they taught their children that victory is not achieved through words and slogans but through strong red blood.

They are the most exalted mothers because they taught their children that the land will not be liberated until it is saturated with the blood of its sons. … Mother’s Day greetings to all the mothers and to the Martyrs’ mothers. Wishing you all the best.” [emphasis added]

While messages such as these may seem utterly inappropriate for Mother’s Day elsewhere, in the PA, they are the norm.

Recently, PMW documented additional examples of the PA’s twisted ideal of a mother, showing that mothers are expected to gladly give their sons for “Palestine.”

On Mother’s Day, Mahmoud Abbas’ Fatah Movement also emphasized Palestinian women’s involvement in and support for terror as a key aspect of Palestinian motherhood. In a greeting to all Palestinian mothers, Fatah stressed their roles as terrorists alongside the men:

“The Palestinian mothers are a symbol of resolve and remaining on the land of Palestine, and they are … the female Martyrs, prisoners, and wounded, and simultaneously they are also the mothers of the Martyrs, prisoners, and wounded … the Palestinian mothers have achieved their status in society through the struggle, [and] through leading the resistance against the Israeli occupation.”

In a greeting to Palestinian women, Ramallah District Governor Laila Ghannam — one of the few women in a senior PA position — stayed true to PA ideology and stressed the Palestinian woman’s role as “a fighting rebel,” and illustrated her words with an example — Dalal Mughrabi. Of all possible female role models, Ghannam chose the terrorist who led the murder of 37 Israelis, 12 of them children:

Ramallah and El-Bireh District Governor Laila Ghannam: “The mother is the foundation, she is the education, she is the school. … From the beginning, the Palestinian woman was a fighting rebel. She was Dalal Mughrabi. In the PLO and in the revolution there were and still are women.” [emphasis added]

[Facebook page of the Fatah Commission of Information and Culture, March 21, 2022]

PMW has exposed Ghannam as a supporter of violence and terror against Israel. After Philadelphia Councilwoman Maria Sánchez awarded Ghannam with an honorary reward in 2015, PMW documented Ghannam’s long record of terror support and glorification of terrorist murderers, which led Councilwoman Sánchez to withdraw the award.