Terror Wave Was Initiated and Fueled by the PA and Fatah

There should be no misunderstanding. The current terror wave, in which four terrorists have murdered 14 people in terror attacks in Israel — the latest of which took place in the heart of Tel Aviv on Thursday — was initiated and is being fueled by the Palestinian Authority (PA) and PA President Mahmoud Abbas’ Fatah party.

In order to ignite and perpetuate the terror wave, the PA and Fatah are using all their usual methods: implicit and direct calls for violence; demonization of Israel and Israelis; invoking the false claim that Israel/Israelis are planning to destroy the Al-Aqsa Mosque; attacking Israeli Foreign Minister Yair Lapid for walking in Jerusalem; and repeating other sundry libels.

As Palestinian Media Watch (PMW) has already exposed, in the run up to the Muslim month of Ramadan, the PA intensified its false rhetoric that Israel was seeking to escalate violence and destroy the Al-Aqsa Mosque. Those calls were then used as a means to create hatred and recruit Palestinians to conduct terror attacks.

Speaking on the first day of Ramadan, PA Supreme Shariah Judge Mahmoud Al-Habbash made the PA expectations of the Palestinians perfectly clear: In the same way as Muslim Prophet Muhammad engaged in war during Ramadan, so too the Palestinians should engage in “Jihad.”

Explaining how Muhammad embarked on the Battle of Badr and conquered Mecca during Ramadan, Al-Habbash clarified that Ramadan is “is not a month of laziness but rather … a month of Jihad, conquest, and victory.”

The Prophet entered the great Battle of Badr (in 624 CE) during Ramadan … Also in the month of Ramadan, in the 8th year of the Hijra (i.e., 629-630 CE), the Prophet and the Muslims conquered Mecca …  Ramadan is not a month of laziness but rather a month of activity, of effort, and of hard work, and as it also was in the life of the Prophet, a month of Jihad, conquest, and victory. [emphasis added]

The official PA daily was even more explicit in its incitement to violence. While claiming that the Palestinians aren’t interested in conflict because the world is preoccupied with the Ukraine-Russia war, a regular columnist, Bassem Barhoum, turned reality on its head, claiming that Israel is intentionally trying to ”provoke the Palestinians” and carry out “uncontrolled retaliatory acts”:

It is the interest of Israel, which in the eyes of the world has become a state of apartheid and ethnic cleansing, to go back to manufacturing the perception of the Palestinian “terrorist” who harms civilians.

It is marketing that it wants calm, but it is sending the settler herds to the Palestinian villages and to the Al-Aqsa Mosque in order to provoke the Palestinians and push them into an escalation and carrying out uncontrolled retaliatory acts that it will use as an excuse to carry out extensive aggression against the Palestinian people…

Completing the diatribe, the PA daily left no room to interpretation regarding the expectation of the Palestinians:

What we need is a joint and agreed upon plan … a plan that will balance between the continuation of the civilian’s daily life, and that simultaneously the popular resistance will be an ongoing daily act with an impact on the Israeli occupation.

Having laid the groundwork with implicit and direct calls for “Jihad” and violence, and to ensure that the Palestinians are sufficiently enraged in order to motivate them to participate in terror, the PA then made repeated references to Palestinians killed by Israelis, without stating they were trying to murder Jews. Referring to terrorists killed while carrying out terror attacks, the PA daily declared:

In less than a week, seven Martyrs for the sake of Palestine ascended to Heaven after being shot by the forces of the occupation, which shoots to kill and for no other reason! [emphasis added]

Among those “killed for no reason” were terrorists who carried out shooting attacks, murdering 7 people, others who attempted murder, and members of the internationally-designated terror organization Palestinian Islamic Jihad (PIJ) that were neutralized on their way to carry out another attack.

Referring to the terrorists as “pure-hearted Martyrs” and referring to their acts as “popular resistance” the PA daily continued:

We are bidding farewell to our pure-hearted Martyrs, while they are ascending to the Heavens. Yes, with a painful heart, but [also] with determination to stand firm, defy, and continue on the paths of popular resistance until defeating the occupation and removing it from the land of our state, whose capital is East Jerusalem… [emphasis added]

In his speech opening the weekly cabinet meeting, PA Prime Minister Muhammad Shtayyeh warned of the imaginary attempts of “Jewish extremists to violate the sanctity of Al-Aqsa Mosque.”

In order to inflame tensions and ignoring the fact that three terrorists neutralized by Israel were members of PIJ on their way to carry out imminent attacks, Shtayyeh baselessly claimed: “Israel considers every Palestinian who is on his land and defends his property as a ticking bomb that necessitates killing him, which is an extremely dangerous matter in light of allowing settlers to carry weapons and kill Palestinians just on the ground of suspicion.”

Similarly ignoring the fact that terrorist Nidal Ja’afreh tried to murder a Jew on a bus by stabbing him with a screwdriver, PA TV claimed that Ja’afreh was “executed … in cold blood.” [Official PA TV, March 31, 2022]. An additional reference added: 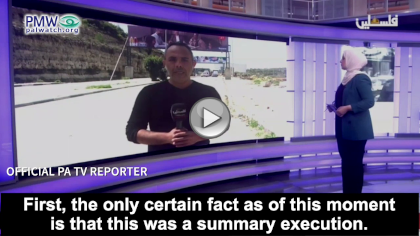 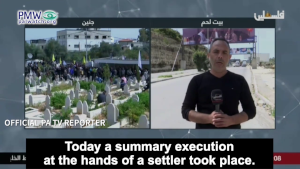 To enrage the Palestinians further, PA Presidential Office Advisor on Jerusalem Affairs Ahmed Al-Ruweidi took the “Israel is attacking Al-Aqsa” trope to an entirely new level, by warning against a “massacre” of the worshipers at the Al-Aqsa Mosque, to be carried out, allegedly, by Israel “and its settlers”:

Presidential Office Advisor on Jerusalem Affairs Ahmed Al-Ruweidi warned against a massacre by the occupation and its settlers against the worshippers at the Al-Aqsa Mosque, especially in light of the escalation and incitement by the settlers…

Not missing an opportunity, the PA even used the visit of Israeli Foreign Minister and alternate Prime Minister Yair Lapid to the Damascus Gate entrance to Jerusalem’s old city as an opportunity to inflame tensions.

The site of many Palestinian terror attacks, the Damascus Gate is in the heart of Jerusalem. Every Israeli, and certainly a minister in Israel’s cabinet, should be able to visit the site without hindrance.

Adopting the baseless threat that Lapid’s “storming” of the Damascus Gate could lead to an “explosion” not only in Israel “but in the region as a whole,” PA presidential spokesman Nabil Abu Rudeineh said the visit was “irresponsible behavior.”

Broadening the scope of his complaints, Abu Rudeineh added:

Israel should be fully aware that what is happening at Damascus Gate and other neighborhoods of Jerusalem, the behavior of the occupation police towards Palestinian citizens, the continued suffering of prisoners, the withholding of the bodies of martyrs, and even the official Israeli threats of new military operations in Gaza … will lead to a flare-up of the fire and will damage the already fragile balance of deterrence.

Abbas’ Fatah faction also joined the threats. Taking its rhetoric to new levels, Fatah warned that Lapid’s visit to the Damascus Gate and the continued visits of Jews on the Temple Mount would “turn into an open religious war.”

Again reconfirming the fact that the PA’s problem with Israel is not territorial, but rather refers to the very presence of Jews in Israel and the very existence of the State of Israel, regular columnist for official PA daily and former advisor to former PA Prime Minister Salam Fayyad on national affairs, Omar Hilmi Al-Ghoul, launched a venomous attack against “Khazar Zionist Judaism” that has been a “most despicable expression of racism” even from “before the establishment” of Israel”:

I will not say anything new to the readers and followers, and not to those who know the components of the Zionist colonialist project state, when I emphasize for the thousandth time that Khazar Zionist Judaism (sic., genetic research has conclusively proven modern Jews share a common origin in Israel and are not the descendants of Khazars) has throughout the decades of its existence in Palestine been the most blatant symbol and most despicable expression of racism against the peoples of the Arab nation in general, and the members of the Palestinian people in particular.

The Zionist colonialist leaderships – even from before the establishment of their Israeli state in 1948, the year of the Nakba (i.e., “the catastrophe,” Palestinian term for the establishment of the State of Israel), and to this very day – are proving that they are deepening and strengthening their racist barbarism, and are elevating and inculcating the murder of ‘goyim’ (i.e., “non-Jews”) – the Arab Palestinian other – for no reason and only because of their national and pan-Arab affiliation and identity, or even because of their Islamic or Christian religious identity. [emphasis added]

The PA has previously claimed that the 1929 massacres were a response to the Jews who “read their hymns” at the Western Wall, “in a highly provocative manner.”