A “Free Palestine” sign on display with the University of Minnesota’s gopher mascot that was erected by the school’s Students for Justice in Palestine chapter. Photo: SJP via Facebook.

If a seminar last Wednesday organized by the anti-Israel group Students for Justice in Palestine (SJP) is any indicator, City University of New York (CUNY) law students may be challenged both in vocabulary and in irony.

Palestinians are resisting “genocide,” third-year CUNY law student Nerdeen Kiswani said during the seminar. According to her, the only acceptable answer is to reject any peace efforts, and to work towards eliminating Israel.

No serious scholar includes Palestinians among victims of genocide. The Palestinian population has only grown since 1948, with its own arts and literature communities thriving, among countless other factors.

It’s a particularly tone deaf comment coming as the world debates whether Russia’s ongoing slaughter of tens of thousands of Ukrainian civilians, or China’s mass detention, forced sterilization, and indoctrination of Uyghur Muslims reach the threshold of genocides.

That’s because Israel has the military might to do exactly what Russia is doing today in Ukraine. But it has never come close, nearly 75 years after its founding, and 55 years after it took control in parts of the West Bank, and previously in Gaza.

At some point, even Israel’s greatest foes should acknowledge that if it wanted to inflict such horror, it would have happened by now.

On the other side, Hamas and Palestinian Islamic Jihad make perfectly clear in words and actions, that Israel’s elimination is the only acceptable outcome of the conflict.

And Kiswani has advocated for the same outcome. Repeatedly.

During a 2020 rally opposing the historic Abraham Accords — a formal peace between Israel and Bahrain, the United Arab Emirates, and Morocco — Kiswani said, “the clock is ticking on Zionism. We cannot know the exact timeline until liberation, but we must do all that is in our capability to defeat the ‘deal of the century,’ to defeat Israel, to defeat Zionism and to ensure that liberation will come within our lifetime!” 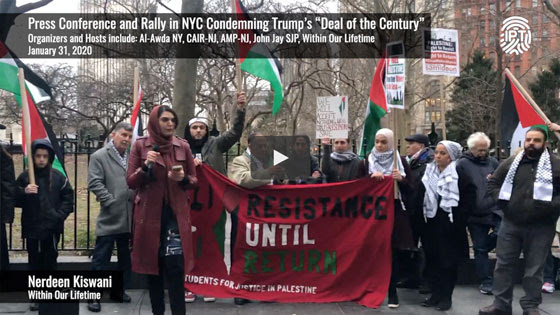 She did so again last Wednesday.

After showing her audience a picture from the Abraham Accords signing ceremony, Kiswani blasted those who “act like Israel has a right to exist, or negotiations can be made with this colonial entity. But we know that that can never, and should never be the case.”

It is difficult to imagine how Kiswani’s vision for Israel  could be realized without mass killings, displacement, and the annihilation of Israeli culture — the stuff of genocide.

Kiswani didn’t offer an alternate vision. She praised a year-old statement for a “unity intifada” that she described as “a passionate commitment to liberate all of Palestine and for Palestinians to unite and overthrowing the settler colonial structure.”

Kiswani runs an SJP offshoot called “Within Our Lifetime.” Its name comes from the hope “that we will achieve Palestinian liberation within our lifetime,” she said during a 2019 rally. It pushes a slogan, “Globalize the Intifada,” and defends “the right of Palestinians as colonized people to resist the zionist (sic) occupation by any means necessary.”

Its Instagram account was briefly suspended last month after it posted a collage of female terrorists to mark International Women’s Day.

And like the Council on American-Islamic Relations’ (CAIR) antisemitic San Francisco chapter leader Zahra Billoo, Kiswani said anyone who supports Israel is an enemy.

“Especially, you know, throughout this last summer,” she said, “seeing so many people who say that they support Palestine. But then say, like, they also support Israel. That’s actually a direct contradiction. You know, you cannot support Palestine and be a Zionist because Zionist ideology, Zionist supremacy is literally a threat to our existence. So how can you support something that is literally made to wipe out our existence?”

That’s a question many Israelis ask about the Palestinian “resistance” groups.

By SJP standards, however, this kind of talk is somewhat tame.

SJP was among the sponsors of a 2017 rally in New York, in which people chanted: “We don’t want two states! We want ’48!”; “From the river to the sea, Palestine will be free!”; and “Khaybar O Jews, Muhammad’s army will return.”

The first chant rejects a peaceful, two-state solution for Israelis and Palestinians. The second, invoking a Palestinian state “from the river to sea,” is a call to eliminate Israel. And the third invokes a 7th century slaughter of Jews.

CUNY has become a hotbed of rabid anti-Israel activity, especially among its faculty.

The law school’s senate passed a resolution in December, which “proudly and unapologetically endorses the Palestinian-led call for Boycott Divestment, and Sanctions (BDS) against Israel,” and aims to “end all Israel exchange programs.”

More than 50 CUNY faculty members left the faculty union last June after it blamed Israel alone for last May’s fighting between Israel and Hamas in Gaza.

One person who left, computer science Professor Yedidya Langsam, said the union chose “to support a terrorist organization, Hamas, whose goal (‘From the River to the Sea’) is to destroy the state of Israel and kill all my relatives who live there.”

During last Wednesday’s program, speaker Fatima Mohamed, another CUNY law school SJP member, emphasized “the importance of armed struggle and really put into context that the Palestine people are not waiting for the United Nations. They are not waiting for international NGOs or for nonprofit organizations for their liberation. They are the fighters who are on the front lines for almost 75 years fighting for their land.”

Her language echoes a statement issued last week by the New York University Law School’s SJP chapter, which, in addition to alleging a “Zionist grip on the media,” said that “Palestinians are not obligated to engage in racialized ‘nonviolence’ theory and wait around for a United Nations action that will never come as their homes are taken from them.”

Like Kiswani, Mohamed said that “Palestinian people have literally resisted genocide. And they have, they are … resistance fighters who have used all means necessary to resist.”

Their talk made it clear that they don’t want Israel to change its policies. They don’t want it to withdraw from the West Bank in a negotiated peace agreement. They want it to stop existing.