Hamas’ Gaza leader Yahya Sinwar delivered an hour-long speech recently, in which he threatened to attack thousands of synagogues worldwide.

Referring to a large photo of Israeli police responding to riots and attacks at the Al-Aqsa Mosque, Sinwar said, “Whoever makes the decision to allow this photo to be repeated, the violation of Al-Aqsa — he has decided to allow the violation of thousands of synagogues all across the world.”

The Hamas leader warned that this could happen if Israelis set foot in the Temple Mount on Israel’s Independence Day, or Jerusalem Day. This year, Yom Ha’Atzmaut is celebrated this coming Thursday, May 5. Jerusalem Day is May 29.

So far, no human rights group has shown the slightest concern over the threat. Neither have so-called “experts” on antisemitism Linda Sarsour or Rep. Rashida Tlaib (D-MI) or Marc Lamont Hill or Peter Beinart, all who have participated in panels on the topic of antisemitism.

Absurdly, Sinwar also claimed that Hamas is not interested in making this into a religious war. That’s really amusing from an organization whose founding documents are steeped in calls for jihad, who praise “martyrdom operations,” and whose many obituaries are laced with imagery of paradise awaiting their mujahadin (“holy warriors.”) 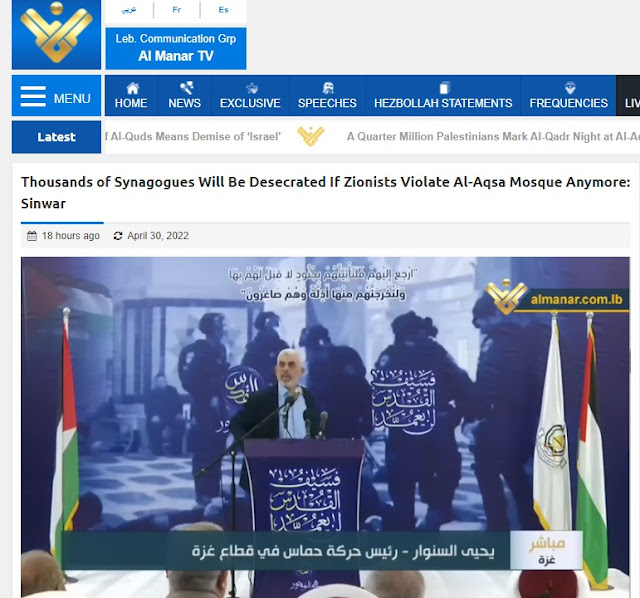 When those who claim to be human rights activists and who pretend to be dead-set against antisemitism pointedly ignore a direct threat against Jews worldwide by genocidal jihadists, it is difficult to escape the conclusion that they don’t really care about Jews or antisemitism at all.
The opinions presented by Algemeiner bloggers are solely theirs and do not represent those of The Algemeiner, its publishers or editors. If you would like to share your views with a blog post on The Algemeiner, please be in touch through our Contact page.