The terrorist who murdered three Israelis at a bar in Tel Aviv and another Palestinian who shot at Israeli forces were both “defending the land of Palestine and the people’s honor” according to the Fatah Movement, which added that their terrorism was “for the sake of Jerusalem and the Al-Aqsa Mosque.”

This message was delivered by Jenin District Governor Akram Rajoub, when he conveyed condolences on behalf of Palestinian Authority (PA) leader Mahmoud Abbas to the families of the two terrorist “Martyrs” — i.e. murderer Ra’ad Hazem and shooter Ahmed Al-Sa’adi.

The governor added further praise for the terrorists and their attacks, stressing the PA’s call for Palestinians to die for Allah and “Palestine” as “Martyrs” in the fight against Israel by stating, “the Martyrs’ blood will continue to illuminate the path to liberation”:

Rajoub conveyed the condolences of [PA] President Mahmoud Abbas over the deaths of the Martyrs of Jenin. He [the district governor] emphasized the role that the Martyrs fulfilled in the struggle, in their defense of the land of Palestine, and he added that they insisted on defending our people’s honor and [acted] for the sake of Jerusalem and the Al-Aqsa Mosque, while united under the flag of Palestine.

He [the district governor] said: ‘The Martyrs’ blood will continue to illuminate the path to liberation through our national unity, so that we will fight the settlers’ extremist government and its terrorist policy, which is targeting everything Palestinian.’”

Palestinian Media Watch exposed another part of the governor’s speech earlier, in which he stated that the murderer of three innocent Israelis “died with might and pride,” and that Palestinians agree that “our children’s blood is pure when it flows while standing against the occupation”: 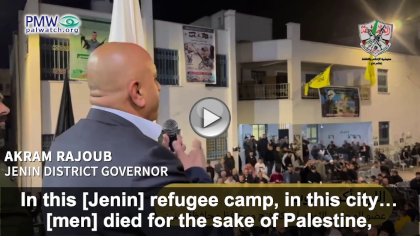 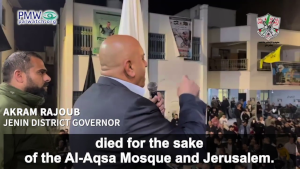 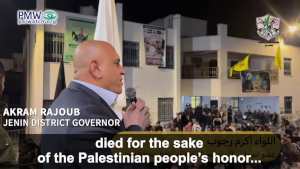 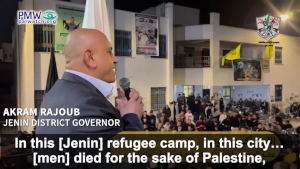 [Facebook page of the Fatah Commission of Information and Culture, April 10, 2022]