Iran’s brave protesters have taken to the streets once again, and although they risk bullets, imprisonment, torture, and execution from the Islamic Republic’s repressive forces, they are also being ignored by the Western mainstream media. Worse still, Facebook and Instagram have been removing footage of the protest.

The recent protests, which started on May 12 in the oil rich province of Khuzestan, in response to soaring price increases, have quickly spread to other cities and morphed into large protests against the regime.

Islamic Republic authorities have resorted to their usual counter-measures, which include shutting down the Internet to prevent footage of the protests and the crackdown on demonstrators from going viral.

But Instagram and Facebook moderators have also removed the videos themselves, because they say that chants of “Death to Khamenei,” or even footage of protesters on the streets can violate their guidelines, if they believe it incites others to violence. 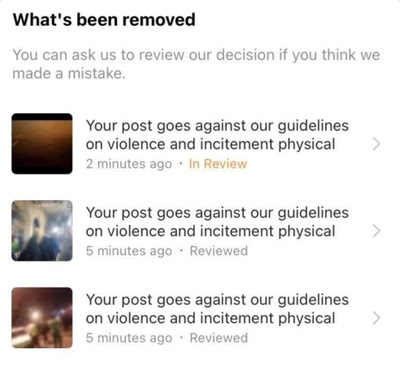 Those who oppose the Iranian regime have protested the social media giants’ decisions.

And an investigation into why the posts about Iranian protesters were censored led to a company in Germany.

Facebook and Instagram have outsourced moderation of Persian posts to the German-based Telus International. The company has around 500 Persian-speaking employees who moderate and fact-check Persian content on these social media platforms, BBC Persian found.

In a program that aired last Tuesday, some Telus International employees talked to BBC Persian under the condition of anonymity.

“There are many in this company both in the lower ranks and even in the higher ranks who openly say they support the regime in Iran,” said one Telus employee, identified with the pseudonym Mehdi.

“Many of the employees in the company are Iranian students who travel to Iran, where they are trained and instructed on which posts should be removed,” a former Telus employee said.

Persian speaking media outlets outside Iran that oppose the Islamic Republic face similar uncertainty and restrictions on their social media posts. Even Radio Farda, which is funded by the US government, has had its posts removed.

Popular Iranian political satirist Salome Seyednia, who has more than 1 million Instagram followers, receives thousands of videos from citizen journalists in Iran every day. But Instagram already has warned her that her account could be taken down after she posted previous protest videos.

Telus International and Meta so far have not commented on the BBC Persian investigation. Meanwhile Iran’s officials including Supreme Leader Ayatollah Khamenei, continue to use these platforms to their full extent and unabated.

People risking their freedom, and even their lives, to speak out against their government are unfairly being silenced on the world’s largest social media platforms.

Investigative Project on Terrorism (IPT) Senior Fellow Potkin Azarmehr is a London-based investigative journalist, business intelligence analyst, and TV documentary maker who was born in Iran. He regularly contributes to several newspapers and television stations on Iran and Middle East related news. You can follow him on twitter @potkazar