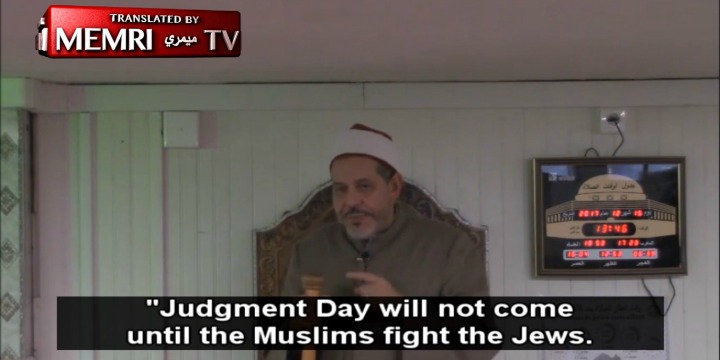 The imam of a mosque in the French city of Toulouse has been found guilty in appeal of “inciting violence and racial hatred” for a sermon he delivered in 2017 in which he talked about killing Jews.

The sermon delivered by the Imam of the Grand Mosque of Toulouse, Mohamed Tataiat, quoted a hadith, or saying, of the Prophet Muhammad which proclaims, “The day of judgment will come only when the Muslims fight the Jews. The Jew will hide behind the tree and the stone, and the tree and the stone will say: ‘Oh Muslim, oh servant of God, there is a Jew behind me, come and kill him, except Algharqada, which is one of the trees of the Jews.'”

The same hadith is often quoted by Islamist preachers in sermons dealing with the conflict in the Middle East or in relation to conspiracy theories about outsize Jewish influence.

Tataiat’s initial trial last September resulted in a not guilty verdict after six civil associations — among them CRIF, the main French Jewish organization, as well as the National Office for Vigilance Against Antisemitism (BNVCA) and the International League Against Racism and Antisemitism (LICRA) — launched a case against the imam.

On Monday, an appeals court decided that Tataiat had engaged in incitement, issuing the imam with a 10,000-euro fine and a suspended prison sentence of six months.

Prosecuting lawyer Alix-Marie Cabot-Chaumeton pointed out that the trial was taking place in Toulouse, where in March 2012, the Islamist terrorist Mohamed Merah shot dead three young children and a teacher at the Ozar Hatorah Jewish school during a 10-day terror spree. She accused Tataiat of having violated his “moral authority” among the local Muslim community.

Tataiat, an Algerian citizen who has lived in France since 1987, was also condemned by Hassen Chalghoumi, a prominent Paris-based imam known for engaging in dialogue with French Jews.

“We don’t need to bring this Israeli-Palestinian conflict back here, to Toulouse. We are not Al Jazeera,” Chalghoumi told media outlet 20 minutes.

“It’s not just the hadith that’s the problem, it’s the whole discourse that follows. This speech brings back hatred and division,” Chalghoumi stressed.

Lawyers for Tataiat argued that the imam’s invocation of the hadith had been misinterpreted, and that he had quoted it as a “warning” to Muslims not to “participate in the movement that leads to this tragic end.”

“The law does not prohibit the reading of a text that is part of the corpus of a religion,” defense lawyer Jean Iglésis asserted. “Today it is a hadith, tomorrow it will be something else.”