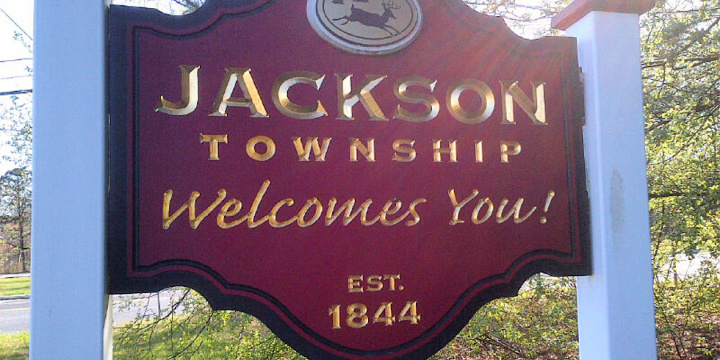 A welcome sign at the entrance to the township of Jackson, New Jersey. Photo: Wikipedia.

Jackson Township in Ocean County, New Jersey, has settled a US Department of Justice lawsuit that was filed after town officials used zoning codes to drive Orthodox Jews from the area and deter others from the community from moving in, town officials announced on Tuesday.

Under the terms of the agreement, Jackson Township will pay a $45,000 penalty and its land use policies will be monitored by the Justice Department for a three year period during which any “amendments or modifications to the township’s zoning code, rules, laws or ordinances that affect land uses for schools, residential schools, houses of worship or other religious uses” must be disclosed to government officials.

It must also verify its compliance with the agreement and train all civil servants to apply the Fair Housing Act (FHA) and Religious Land Use and Institutionalized Persons Act (RLUIPA) lawfully. In addition, $150,000 will be paid “for the purpose of compensating aggrieved persons who have suffered as a result of alleged discriminatory actions by the township” and religious minorities will now be able to file formal complaints alleging religious discrimination.

“It’s time for Jackson Township to move forward,” Jackson Township Mayor Michael Reina said on Tuesday. “This governing body is committed to ensuring that we will do just that in order to foster one, united community, respectful of all people who call Jackson home.”

The resolution of the case is the latest chapter of a saga that began in 2015, when some Jackson Township residents began objecting to the presence of Jewish neighbors, often in crudely antisemitic terms.

“We need to get rid of them like Hitler did,” one resident said on social media. Another described Jews as “filthy f**king cockroaches.”

In 2017, the township council passed two zoning codes, Ordinance 3-17 and Ordinance 4-17, to restrict private schools to three specific areas and outlaw constructing new dormitories entirely, a measure “making it impossible for religious boarding schools to establish in the township,” the Justice Department said in 2020.

It also specifically ensured that no new yeshivas could be established.

In addition to the Justice Department’s action, the codes prompted New Jersey Attorney General Gurbir Grewal to sue Jackson for civil rights violations, including surveilling Jews and singling them out for enforcement of land use laws to prevent their building sukkahs, temporary structures built during Sukkot festivals, and eruvim, boundaries within which certain activities are permitted during Shabbat. The state’s case against the township remains unresolved, officials confirmed on Tuesday.

The antisemitic atmosphere was on full display during a town council meeting last October, where longtime resident Hope Drew became irate and sobbed while accusing Jews of “lawlessness.” She went on to describe their homes as WaWas, a chain of rural convenience stores that sell cigarettes and pre-prepared hoagies.

“It’s lawlessness,” Drew bellowed at Jackson’s town council members. “When you wake up in the morning and see another house pop up or these poles or a real estate sign leaving their signs up fifteen days after closing and on Saturdays your WaWa is opened in the middle of your neighborhood, these are things that people are leaving. But I’m not, I’m not going anywhere.”

Drew’s testimony dismayed local talk show host Judi Franco, who, responding to it, wrote, “Before you say ‘this isn’t antisemitism, this woman just wants to protect her town from change and urban decay,’ ask yourself if in 2021 America you could get away with this public rant against any other group. Ask yourself if you could substitute blacks, Muslims, Asians or any other minority group whose customs differ from your own and have it not be considered hate.”

Recently, Drew has led efforts to eliminate transportation subsidies for students attending non-public schools, many of which are religious and serve Orthodox Jewish children, 3,100 of whom attend religious schools in Lakewood, a neighboring town home to over 100,000 Orthodox Jews.

She isn’t the first to lobby for zoning laws that discriminate against Jews or restrict the expression of their faith.

In April, in Rockville Centre, New York, a town in Long Island, resident Michelle Zangari demanded that the Rockville Board of Trustees “amend the code so a synagogue cannot be on every residential street” and accused Jews of destroying the community.

Complaining about a menorah mounted on a Jewish home owner’s lawn, she also said, “This may sound extreme. Many people think you sound crazy I get it…There is now a menorah at least eight feet high on the front lawn of a home a few blocks from mine, and I’m worried,” she continued.

Zangari also carped about “large crowds during the Sabbath” and said Jewish residents  had “transformed” Long Island’s Five Towns, a cluster of localities on the South Shore, in the 1980s.

Footage of the meeting appears to show Rockville Centre Mayor Francis Murray agreeing with Zangari, but he later issued a statement that said, “Rockville Center remains a welcoming, caring, and inclusive community that embraces all members of our village. We are home to people who have come from all different paths in life, but what binds us together is the kindness, respect, and compassion we have for our fellow neighbors. As an elected board, part of our responsibility is to provide an open forum for all residents. We will not let divisive rhetoric of any kind define us; we embrace understanding and acceptance of all.”