When US President Joe Biden announced that his administration would be renewing its financial assistance to the Palestinian Authority (PA), he probably thought he was promoting peace.

Destroying that illusion, a new video released by Mahmoud Abbas’ Fatah party reiterates that the US-trained and funded PA Security Forces fulfill a double role: cops by day, and terrorists by night. 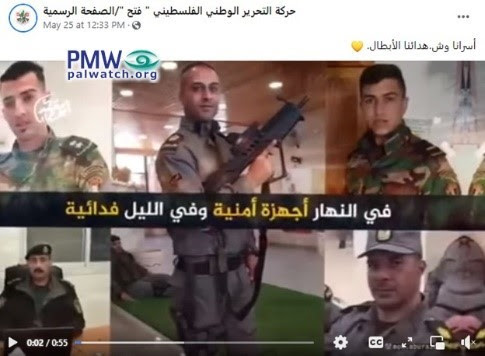 In the video linked to the post, Fatah glorifies four members of the PA Security Forces who were arrested or killed during gun battles with Israeli forces combating terrorism. In addition to glorifying the arrested and killed terrorists, the video further applauds the fugitive father of terrorist Ra’ad Hazem who murdered three people in a terror attack in Tel Aviv.

The father holds the rank of Colonel in the PA Security Forces. 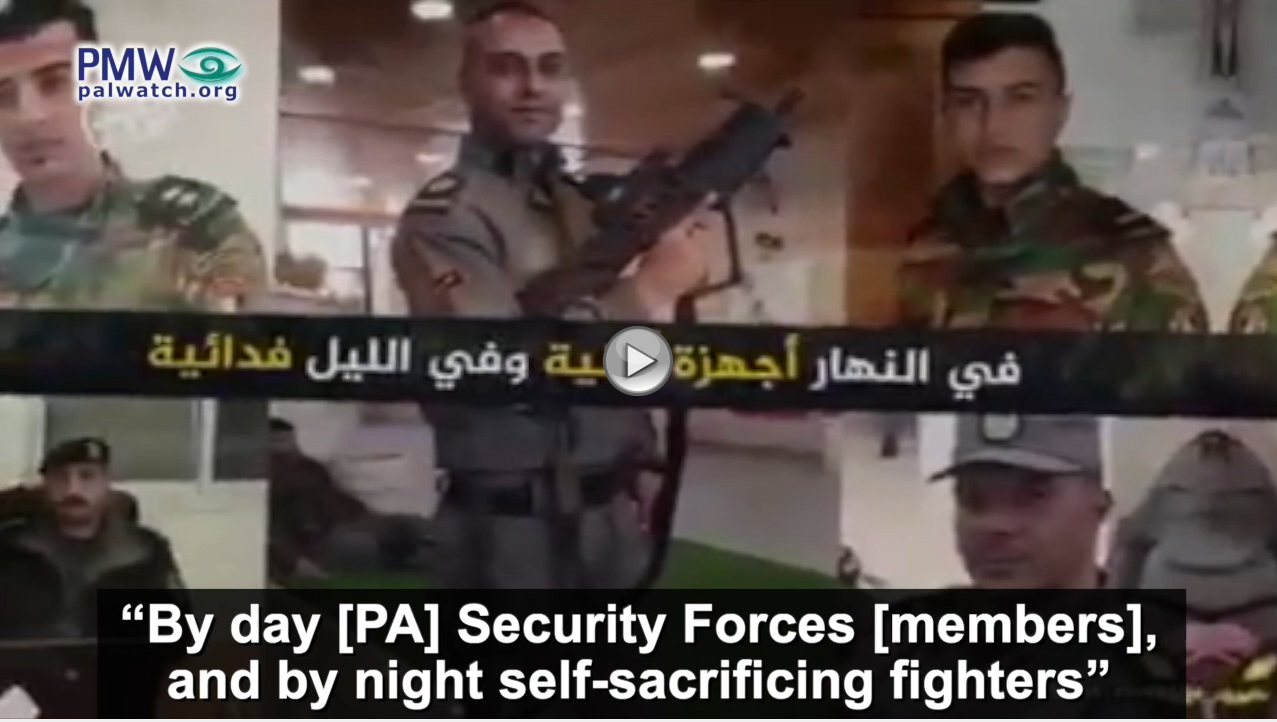 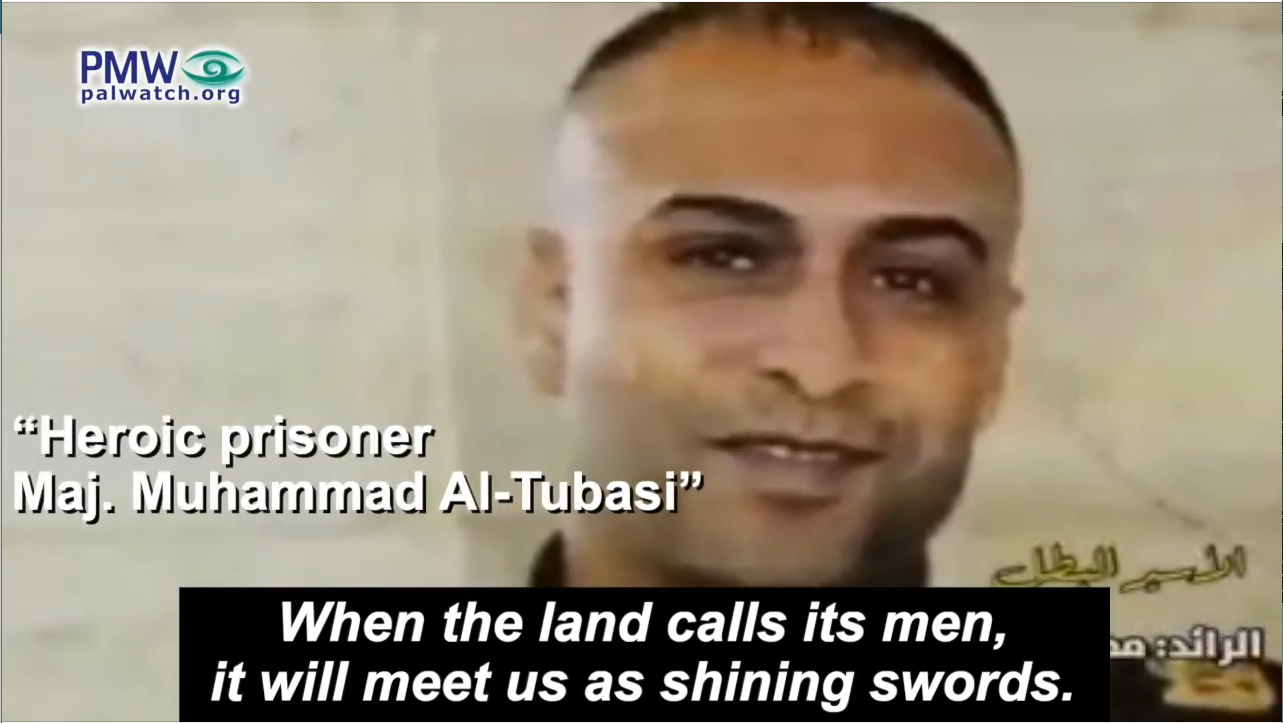 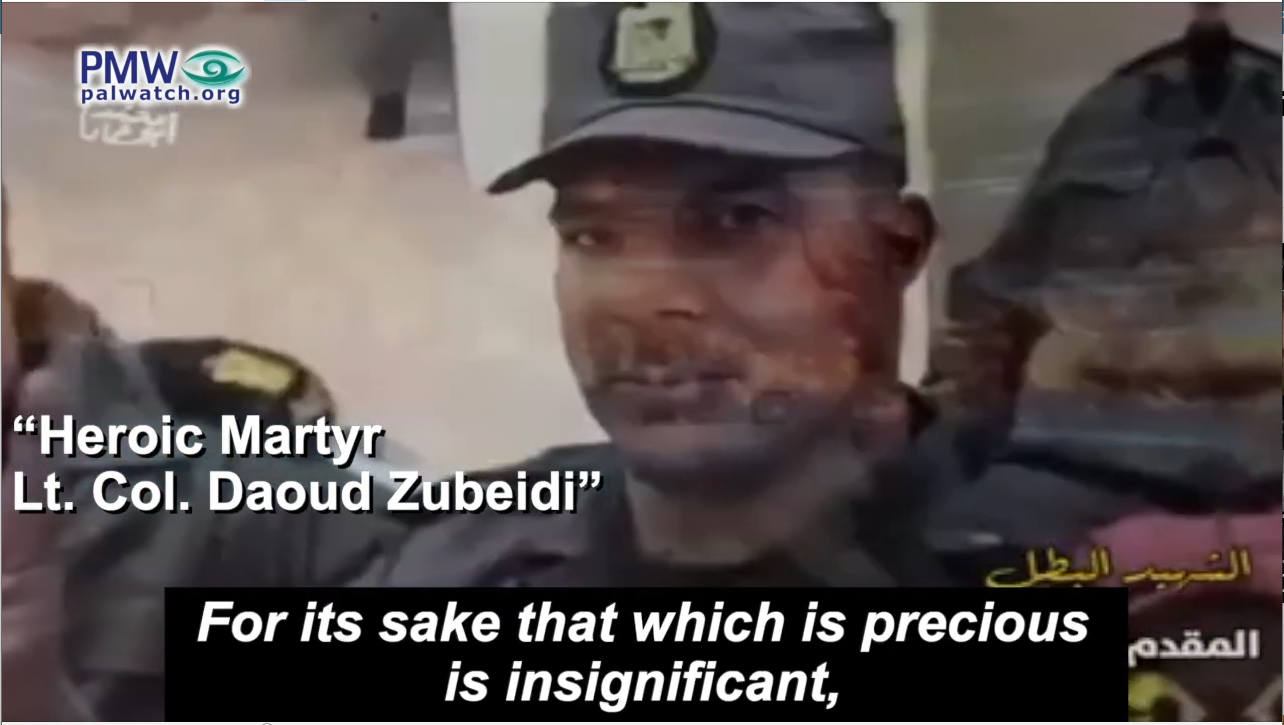 In the video, Fatah shows images of the following terrorists, specifically noting the rank — mostly high ranking officers — they hold in the PA Security Forces:

Al-Tubasi is suspected of shooting at Israeli soldiers near Jenin on May 13, 2022, in an attack in which Israeli police officer Noam Raz was murdered.

Zubeidi, who participated in the same attack and shot at Israeli soldiers in Jenin on May 13,  died of his wounds two days later.

Fathi Hazem is the father of terrorist Ra’ad Hazem, who murdered three people.

Ayaseh and Aliwi, were shot while shooting at Israeli undercover forces on June 21, 2022.

While the photos of the terrorists are shown on screen the following song is played in the background:

“When the land calls its men, it will meet us as shining swords.

For its sake that which is precious is insignificant, and we will not bow before anyone other than the Creator

O my land, how the Martyrs engraved their names on your mountain rocks

O my land, how the poets composed their poems about the steadfastness of your men”

An additional Fatah Facebook post was dedicated solely to the first of the terrorists included in the video: Muhammad Al-Tubasi.

According to the post, Al-Tubasi is a released terrorist who has two terrorist bothers who were killed, and a third brother — Said Al-Tubasi — serving 31 life sentences for orchestrating two car bomb attacks in which 31 people were murdered. 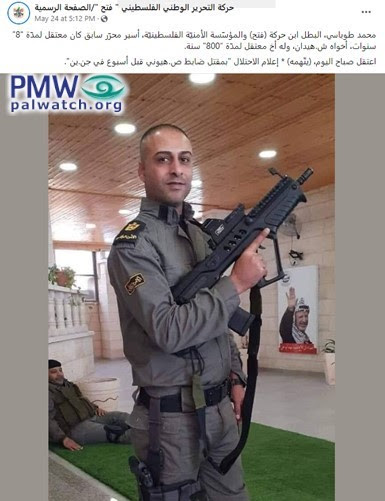 The active participation of the PA Security Forces in acts of terror is nothing new; rather, it is well known and, as exposed by Palestinian Media Watch, is often cited as a source of pride by Fatah members. 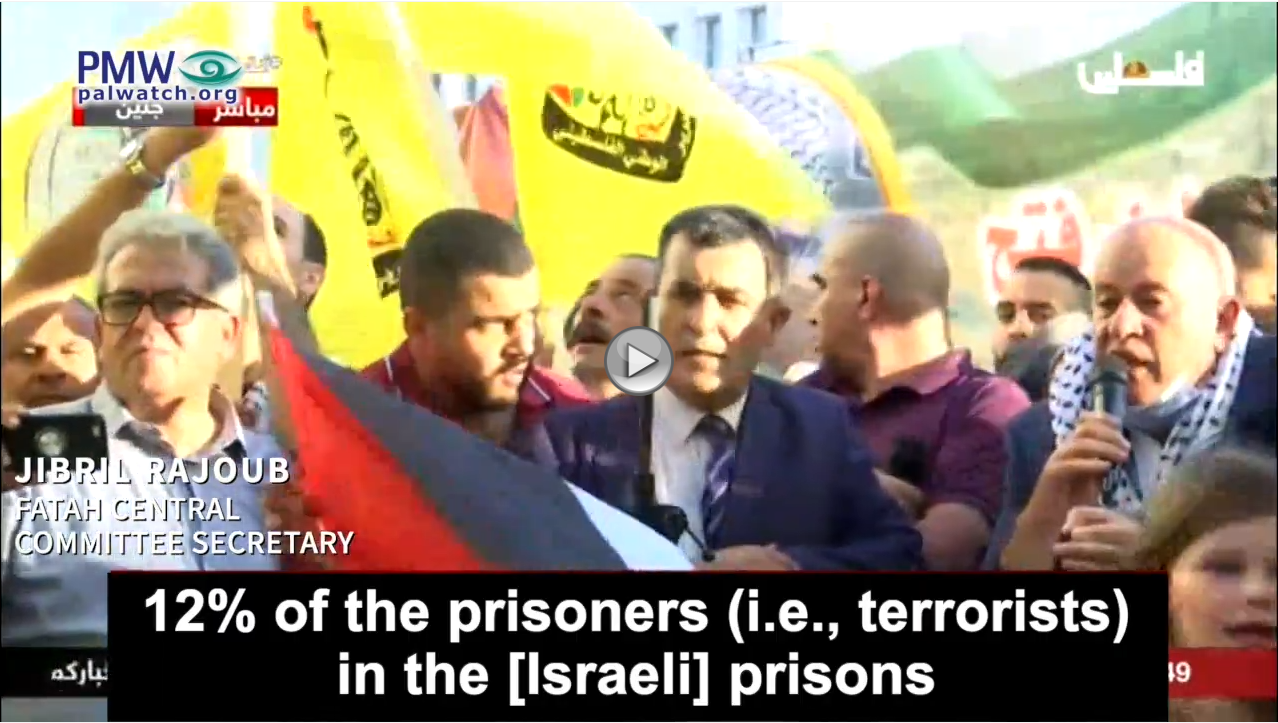 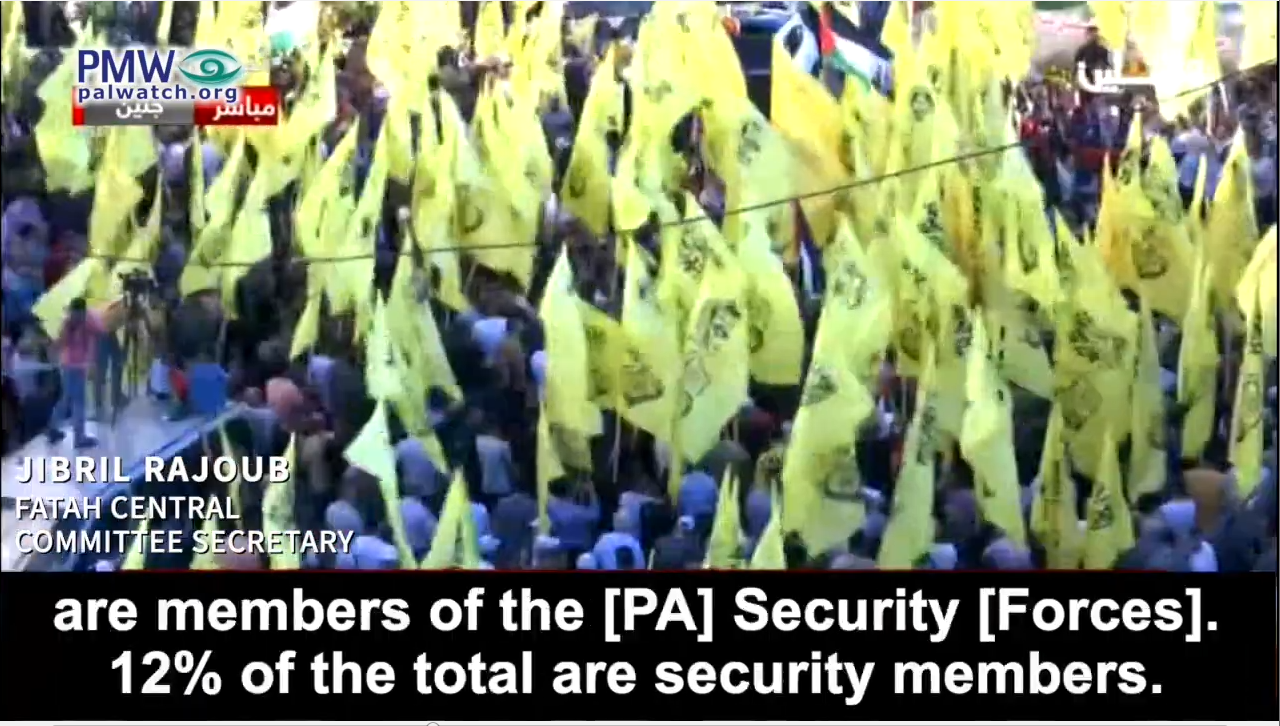 “12% of the prisoners [i.e., terrorists] in the [Israeli] prisons are members of the [PA] Security [Forces]; 12% of the total are security members. So no one should lecture Fatah or its institutions.”

Since there were approximately 5,000 Palestinian terrorists held in Israeli prisons at the time of Rajoub’s statement, this means that no fewer than 600 members of the PA Security Forces have been arrested for their direct participation in acts of terror.

Rajoub is also not the first Fatah member to brag about the participation of the PA Security Forces in terror. In 2009, speaking just days before Israel approved the transfer of 1,000 AK-47 assault rifles to the PA Security Forces, which were being trained at the time by American Lt.-Gen. Keith Dayton, former PA Minister of Prisoners’ Affairs Ashraf Al-Ajrami claimed: 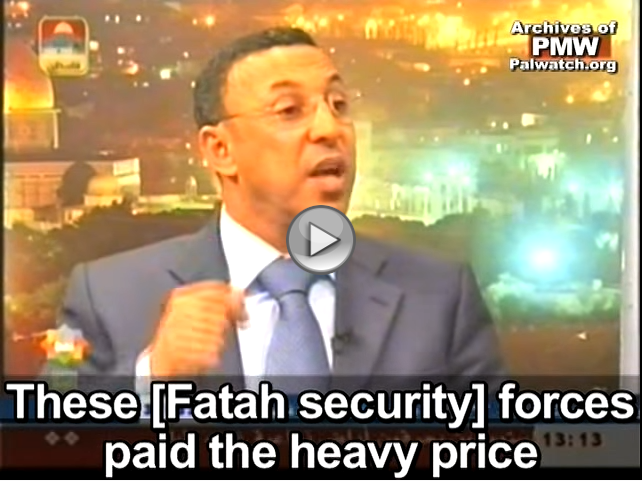 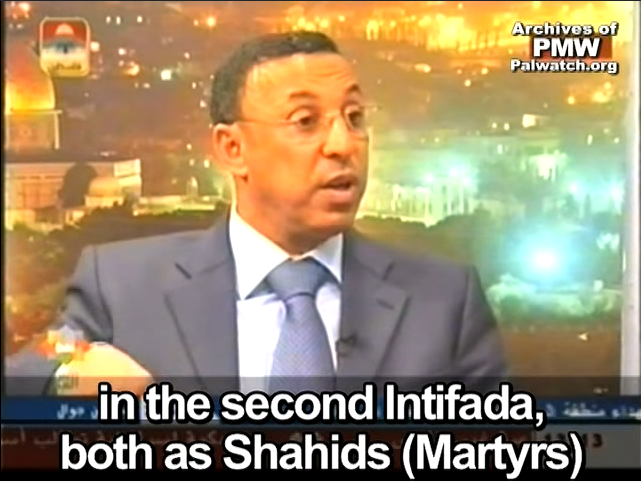 These [Palestinian Authority Security] Forces paid the heavy price in the second Intifada, both as Shahids [Martyrs] and as prisoners. The greatest number of prisoners is from the Security Forces sector. They are the ones who bore arms and carried out the greatest and most important operations [terror attacks] against the Israeli occupation…

Announcing the renewal of US aid to the PA, Secretary of State Antony Blinken said that the US was also “resuming vital security assistance programs” for the PA.

A statement published on the website of the US State Department also quoted Secretary Blinken saying that the funds allocated in May of 2021 came “in addition to the more than $250 million in economic, development, security, and humanitarian assistance for the Palestinian people announced in March and April, bringing planned U.S. assistance to more than $360 million.”

The statement further clarified the goals the Biden administration sought to achieve via the aid:

U.S. foreign assistance for the Palestinian people serves important U.S. interests and values. It provides critical relief to those in great need, fosters economic development, and supports Israeli-Palestinian understanding, security coordination, and stability. It also aligns with the values and interests of our allies and partners.

A “Fact Sheet” issued by the State Department in March 2022 added:

“The U.S. government plans to provide an additional $75 million in economic assistance to the Palestinian people this year. Additionally, the United States is also providing $45 million for programs to support the security sector including important improvements to the rule of law.” [Emphasis added.]